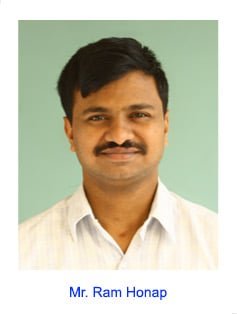 Mr. Ram Honap began spiritual practice in the year 2000. His entire family, father, mother and sister also practice Spirituality under the guidance of His Holiness Dr. Jayant Athavale. From the beginning, Ram was diagnosed by the subtle department of SSRF to have been suffering from distress due to negative energies. As he began to be more regular in his spiritual practice and take on more and more satseva(such as putting up book stalls, distribution of spiritual journals, etc.) he found that the distress only began to increase. It included the following problems:

In 2003, Mr. Chanda Dixit, a devotee of H.H. Bhaktaraj Maharaj came to visit Ram’s family. His wife Mrs. Shubhangi Dixit gifted Ram with a picture (that was already in a picture frame) of H.H. Bhaktaraj Maharaj. It was an uncommon picture that Ram had not seen before and it showed H.H. Bhaktaraj Maharaj holding a stick. Ram was elated to have the photo. He placed it on his study table and would pray constantly to Baba (a name that seekers fondly called H.H. Bhaktaraj Maharaj) for spiritual healing to occur on him. When praying or gazing at the picture, Ram’s attention would invariably get drawn to the stick which Baba was holding in the picture. Every time this would happen Ram perceived that the mantrik (the subtle sorcerer) possessing him would get very intimidated and fearful. Ram perceived that Baba was doing spiritual healing on him through the subtle and that the mantrik was getting beaten with the stick which Baba was holding. Ram perceived both destroyer (marak) and savior (tarak) frequencies emanating from the picture, which were providing a protective spiritual covering around him. 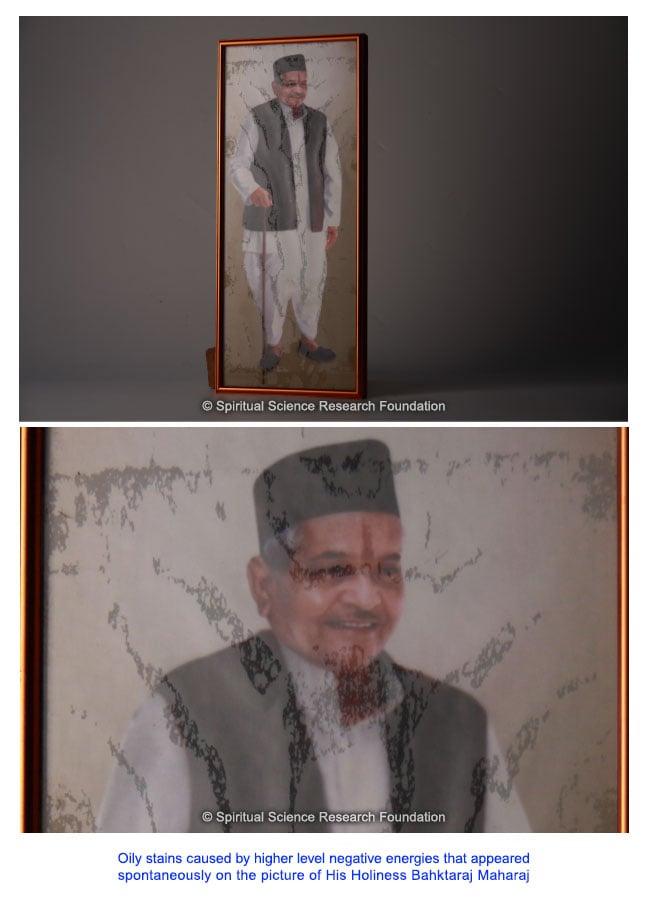 After about three months of having the picture Ram realized that the photo had changed. It looked greasy and did not look like how it used to before. At the time, attacks from higher level negative energies through stains, etc. were just beginning at the research centre, so Ram did not know what had happened to the photograph. Even so, he had a strong feeling from within that the picture had been tarnished by negative energies and needed to be sent immediately to the subtle department of SSRF for a subtle reading and analysis.

So he sent it to the SSRF research centre in Goa and Mrs. Anjali Gadgil from SSRF’s subtle department confirmed his suspicions, that the picture had indeed been attacked by negative energies. Another strange thing which occurred was that when he sent the photograph, the stains were not all over the photograph. Our observation has been that the oily stains have grown over the years. In its current state, the photo looks as if oil has been spilled all over it. Thus, the subtle attack continued even after the photograph was not with Ram.