In this case study we describe how an altar and all the pictures of Deities that were displayed on it burnt up spontaneously. The event is described in the words of Mrs. Preeti Ghogare, a seeker doing regular spiritual practice under the guidance of His Holiness Dr. Athavale.

2. Description of the event of spontaneous combustion

The following slideshow depicts the scene and the pictures of Deities that were burned. 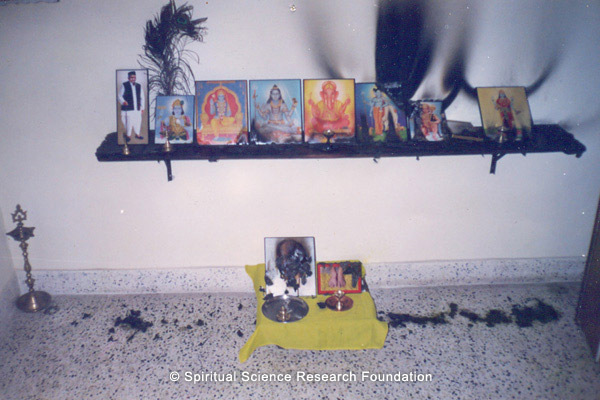 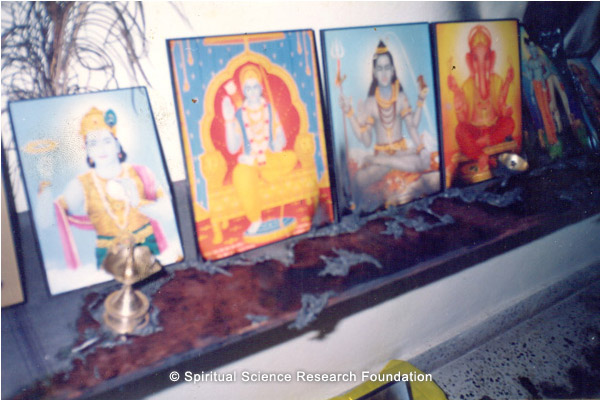 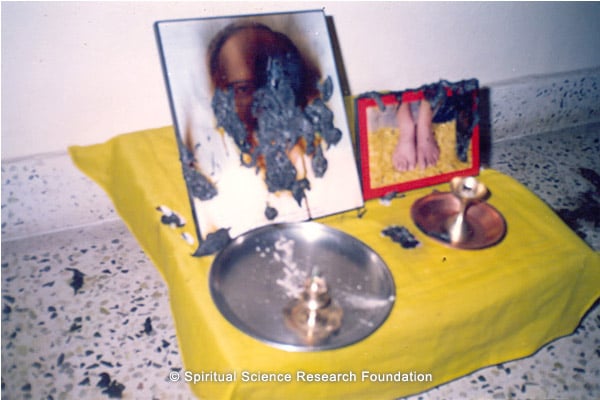 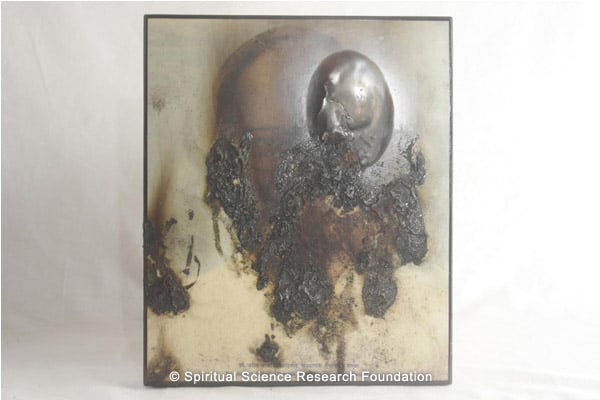 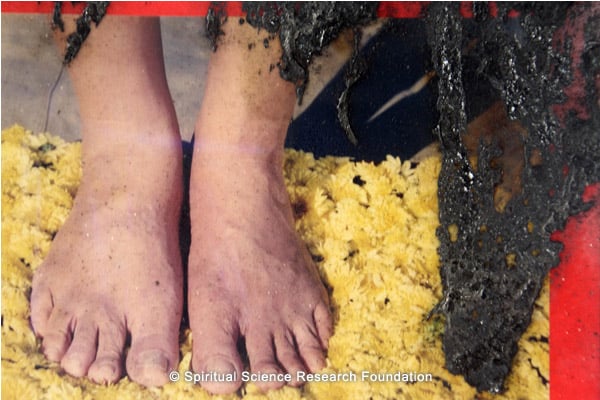 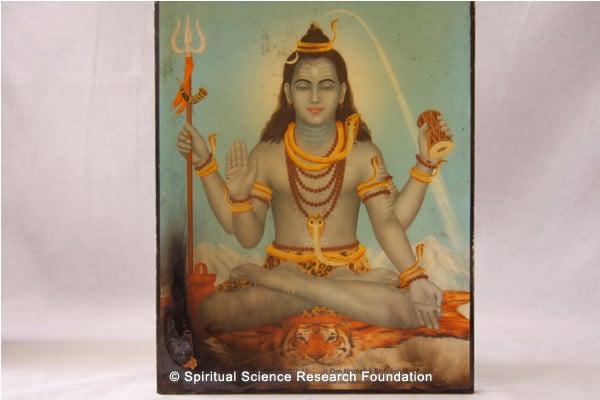 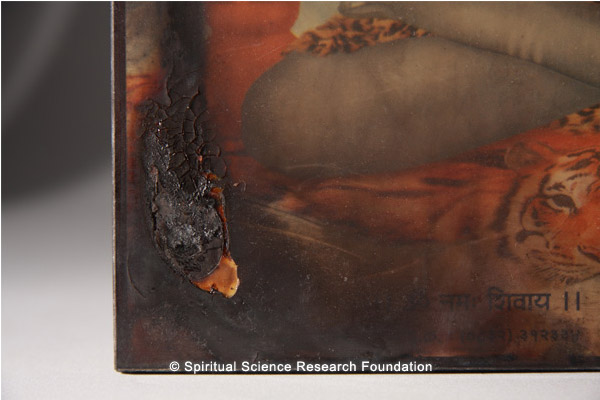 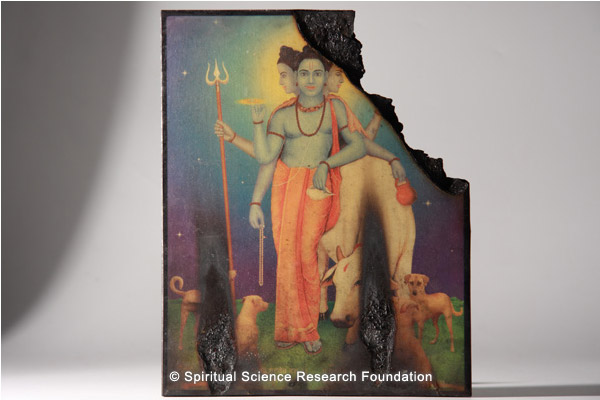 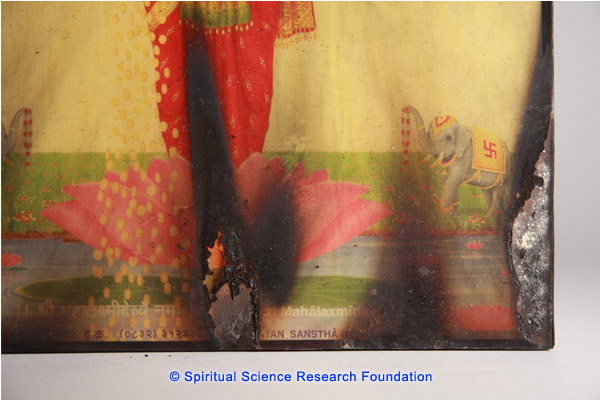 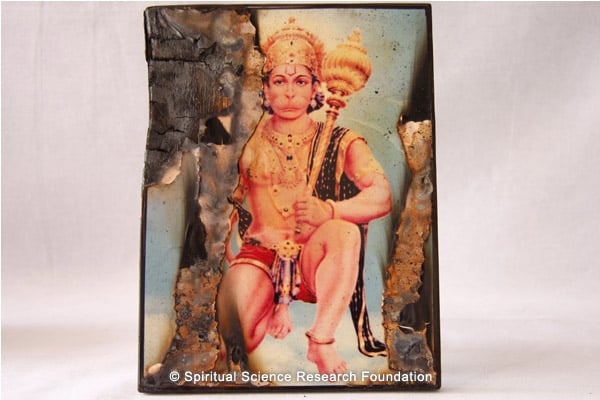 Spiritual Research team’s comment: Each of the Deity’s pictures was burned as if somebody or something had deliberately attacked each picture, one by one. It did not seem like a normal fire where everything burned evenly.

3. Subtle analysis of the attack

We conducted spiritual research, i.e. subtle-analysis, about this case of spontaneous combustion using advanced sixth sense. This was so as to ascertain what happened in the spiritual dimension, for fire to automatically manifest in the physical realm, without any rational cause. In this case, we also have a drawing based on subtle-knowledge describing the attack in the subtle. Mrs. Yoya Vallee, a seeker with an advanced sixth sense of vision, went back in time and saw what happened in the subtle and the nature of the attacking entities. See picture below.

All Yoya’s drawings are checked by H.H. Dr. Athavale to validate what she saw. This drawing got a score of 80% correct, which indicates a high degree of accuracy. 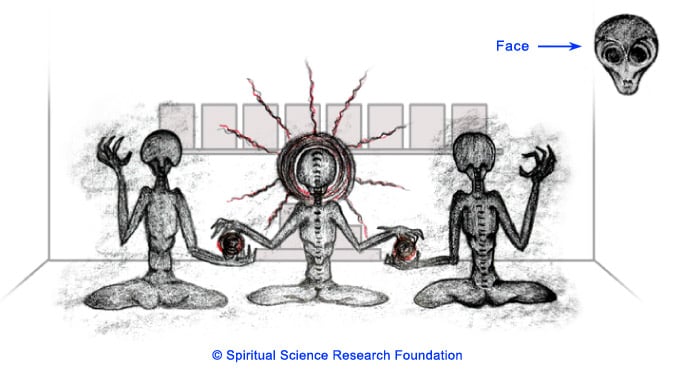 Borders containing Sri Krushṇa’s principle have been drawn around the article so that readers do not feel distressed while looking at the images or drawing based on subtle-knowledge or reading the information given above.

At first, Yoya saw three shapes of black energy materialising in the meditation room. As the shapes began to crystallise, she perceived them to be three demons. The drawing based on subtle-knowledge above shows what the demons looked like from behind. The three demonic energies had skeleton-like forms and always worked together. The demon in the centre was the main one, and it transferred energy to the other two by holding their hands. A ring of black energy was seen circling around the head of the middle demon. The three demons, however, were just the final perpetrators of the attack. They were acting under the orders of a māntrik (subtle-sorcerer) from the 5th Region of Hell (Pātāl).

The demon in the centre began to concentrate so as to receive more black energy from the subtle-sorcerer. The black energy was then transmitted to the other demons, who in turn transmitted it into the meditation room. Then all of a sudden the black energy that had permeated and enveloped the entire room, burst into a ball of fire. Immediately the cloth on the altar table caught fire and went up in flames. The flames then spread to each of the Deities’ pictures. Then almost on cue, the demons began to dematerialise and vanish from the scene.