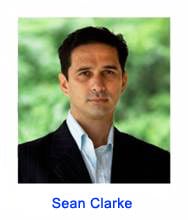 Sean Clarke has been doing spiritual practice under the guidance of SSRF for the past 12 years. In the recent past, as his satseva (service to the Truth) of researching and publishing articles on the SSRF website, he has witnessed many supernatural phenomena and has interviewed many people who have had supernatural experiences. In this article, he narrates his brush with spontaneous blood stains which appeared around him.

The first time I saw a blood stain appearing was when I was visiting an SSRF ashram in Goa, India in 2003. After finishing lunch, as I lifted my plate off the ground, I saw a blood stain that seemed to have materialised just below my plate. I searched for a dead insect but found none. The stain was about 3 cms long. It was then that I learnt of this phenomenon and also found out that, in some cases, seekers had found pieces of flesh beside the blood stains that appeared spontaneously. 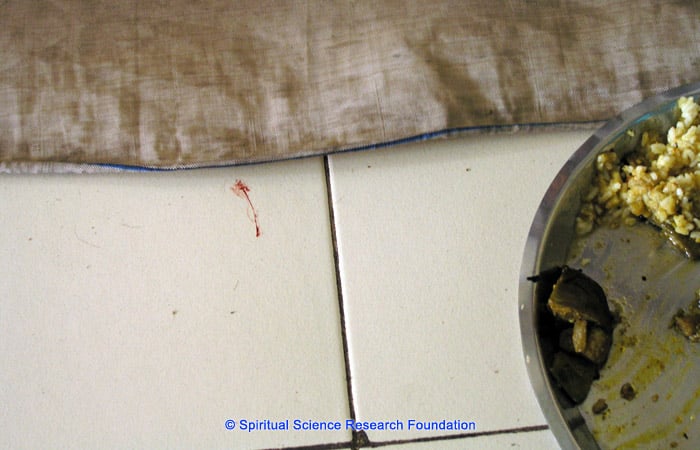 Six years later, in the beginning of 2009, as we began production of a documentary explaining blood stains caused by negative energies, I experienced the phenomenon 3 more times.

The first time was while sweeping the floor of my room. While performing this routine task, my attention went to the floor just in front of me where there was a sudden appearance of a blood-like stain. It was quite prominent, approximately 3 to 4 cm long and just a moment before, it had not been there. The picture below shows this particular blood stain. 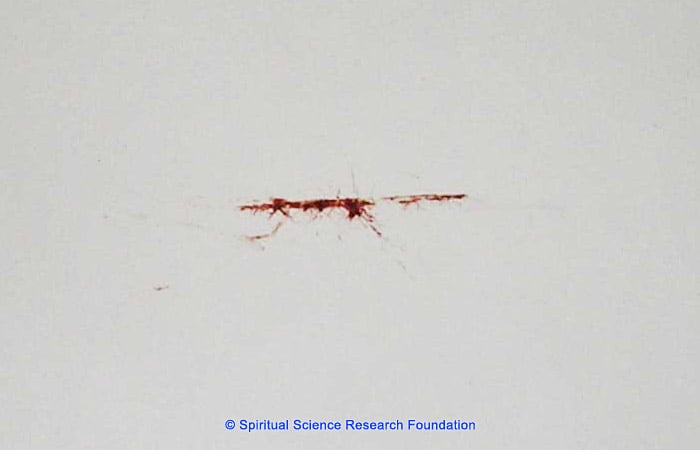 The next two incidents happened while I was asleep. The first was when blood stains appeared randomly on my bed sheet. They were too large to have been caused by any insect. 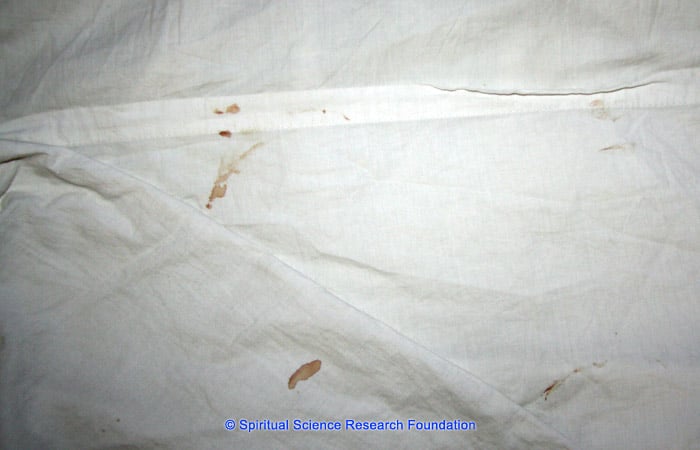 The second time that it happened at night, was when blood stains appeared on my vest. Here, unlike the previous time, there were three well-defined round stains in a row. They were each of at least 1 to 1.5 cm in diameter and at an equal distance apart. When I awoke I saw them almost immediately, and they were still semi-wet.

This time around I also sent the vest for forensic testing. When the test results came back, it was found to be the blood of a human being, but what was really uncanny was that the blood type did not match mine. My blood type is AB-ve while the forensic results showed that the stains were A+ve.

Later that morning I showed the vest to His Holiness Dr. Jayant Athavale, and to other seekers within the subtle department of SSRF. They confirmed that it was a subtle attack by negative energies. H.H. Dr. Jayant Athavale commented that the stains were emitting a foul subtle odour. When I smelled the vest, I too could smell the odour emanating from it.

At that time two new seekers were visiting the research centre. Both of them were able to perceive the subtle and were quite sensitive to subtle vibrations. However, unknown to them, they were both possessed by higher level negative energies. On touching one of the stains to take a subtle reading, they both felt a surge of energy emanating from it, and on the whole had a positive feeling about the stains. In actuality, it was the possessing entity in each of them that was drawing on the black energy from the stains, and feeling positive about receiving black energy from the stains.

A few months later when I saw the vest, a foul order emanated very strongly from it. It has been our experience that quite often when negative energies affect a person’s clothing, it emits a foul and almost pungent smell.