The Maharshi University of Spirituality along with the Spiritual Science Research Foundation conducted an experiment to determine if the recitation of mantras from an ancient sacred text, the Samaveda can impact the body temperature of a person. Using a thermal imaging device, the surface body temperature of 2 seekers were measured around the area of their chakras (which forms a part of the Kunḍalinī system) before, during and after the recitation of mantras.

It was observed that the temperatures of the regions associated with the chakras rose by as much as 2.8°C within 30 minutes in both individuals when exposed to mantras from the Samaveda. This is even though the studio where the mantras were being recited was 5°C less than where the baseline readings were taken.

A control reading was taken (with no mantra recitation) and it was observed that the body temperatures of the regions associated with the chakras of both seekers reduced by as much as 1.4°C even though all other conditions were identical to when the mantras were recited.

In physics, it is a well-known fact that it is not easy to harvest energy from sound waves and that sound does not have the ability to create such temperature differences in the environment. However, this experiment indicates that some sounds like mantras generate energy that can affect the body temperature of a person in a relatively short period of time. Through spiritual research, it was concluded that mantras generate spiritual energy. Thus, along with energy forms such as solar energy, nuclear energy etc., an important finding is that spiritual energy also needs to be considered as a form of energy.

1. Background of the experiment

The Maharshi University of Spirituality along with the Spiritual Science Research Foundation have found through numerous experiments and through spiritual research that Sanskrit emits positive subtle energy when spoken or written. The earliest collection of Sanskrit works are the Vēdās. The Vedas consist of 4 parts and these are the Rugvēda, Sāmavēda, Yajurvēda and Atharvavēda.

Two Vēdmurtis (i.e., priests who have learned the Vedas) from the Shri Yogiraj Ved Vijnan Ashram, Solapur, Maharashtra who are well versed with the Ranayaneeya Samaveda visited the Spiritual Research Centre and Ashram in Goa, India. As they were recording verses from the Ranayaneeya Samaveda in the Spiritual Research Centre’s studio, the Maharshi University of Spirituality took the opportunity to test the effect of the recitation of Sanskrit verses from the Samaveda on two individuals. Thermal imaging technology was utilized to study differences in body temperature in the 2 individuals before and after the recitation of the Sanskrit mantras.

Thermal imaging involves the use of thermographic cameras to detect long-infrared range radiation in the electromagnetic spectrum. An object will radiate more infrared radiation as its temperature increases, so thermal imaging can be used to measure variations in temperature. Temperature naturally changes due to heat flowing from a hotter region to a cooler region, thus raising the temperature of the cooler region and reducing the temperature of the hotter region. If changes in temperature detected by thermal imaging do not follow this pattern, it implies that there is an external energy source powering the heat exchange.  For more information, refer to: https://en.wikipedia.org/wiki/Thermography

3. Setup of the experiment 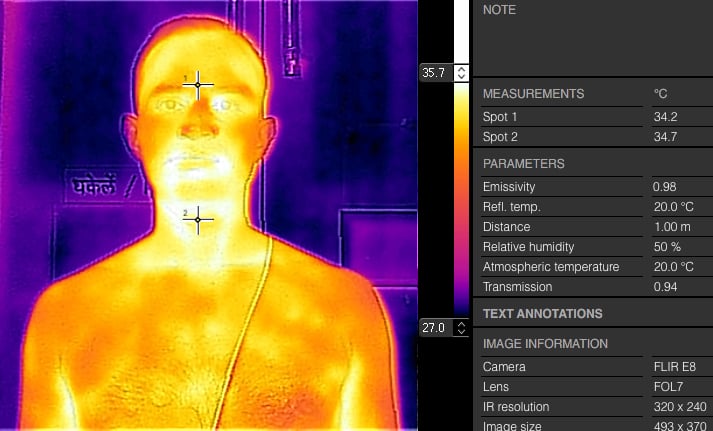 The following two sets of charts show the temperature fluctuations of the 4 chakras of the seekers over the period of 50 minutes while listening to the recitation of the verses of the Samaveda and while not listening to anything.

Through spiritual research, it was found that when mantras from the Samaveda were recited, they generated positive spiritual energy. This spiritual energy was absorbed by the chakras of the seekers; an energy exchange was created and hence resulted in the temperature difference. This brings up a few interesting aspects and avenues for discussion and further experimentation:

We appeal to scientists who are interested in carrying out further research on mantras and their subtle effect to contact us using login facility.