Sweating and body odour are facts of life for most people. Heavy perspiration and body odour can happen when we exercise, when we are too warm, or when we are nervous, anxious or under stress. The physical, biochemical and psychological causes of body odour and foul smells emanating from the human body are widely known to the scientific community. Factors such as food, drink, and diseases can affect body odour. An individual’s body odour is also influenced by lifestyle, genetics and medication.

However, there is another important cause for body odour and foul smells which is unknown to the scientific community: a spiritual cause.

The spiritual cause for bad odours was received as Divine Knowledge by seekers of SSRF with a highly activated sixth sense or extra-sensory perception (ESP). When a person is graced with sixth sense, he is able to access the Universal Mind and Intellect. This sixth sense is due to spiritual practice undertaken in this birth or a previous birth.

Negative energies are known to produce various types of foul odours from the body. Sometimes the foul odour (emanating from the body, bad breath, bad smell from burps, yawns, etc.) is made to spread into the surrounding environment. This is done to increase the distress of not only the affected person but also of those in the vicinity.

3. What is the cause of body odour?

Sweat itself is odourless by nature.  Bacteria that normally cover the surface of the skin break down sweat.  The by-product or resulting waste material of this interaction are acid compounds that have an odour which we associate with body odour.

As bacteria breaks down sweat, a couple of different odour compounds are produced.  These acids have distinct smells and are typically what constitutes body odour.  Two common acid compounds associated with odour include:

4. What contributes to body odour and bad breath?

What we eat can play a significant role in not only body odour, but foot odour and bad breath as well.  Nutrients and compounds contained in food are essential for day-to-day sustenance. However. some of them, especially when eaten in overabundance, can influence odour.  Foods commonly associated with odour issues include red meat, seafood, egg yolks, garlic, onions, yogurt, beans, asparagus, cabbage, and spices such as mustard seed and coriander.

A common side effect of many drugs is sweating.  Antipsychotic and antidepressant medication can be known to do this, as well as some other medicines.  In addition, overuse of aspirin and acetaminophen can also lead to increased sweat production.

The most common hormonal change associated with body odour is menopause.  A common side effect of menopause is hot flashes, which can lead to increased perspiration.  As more sweat is produced, more odour compounds are produced as a result of bacteria breaking down the additional sweat.

Human biology and genetics do play a role in how a person smells.  People of East Asian descent (such as the Japanese, Chinese and Koreans) tend to have fewer sweat glands in the body.  Fewer glands make them less prone to body odour due to the fact that fewer sweat secretions are released.  In addition, people of East Asian descent tend to have dry ear wax.  In contrast, most people have wet ear wax.  This is due to a particular gene prevalent in Japanese, Chinese and Korean ethnicities.  Wet ear wax can contribute to auxiliary body odour. 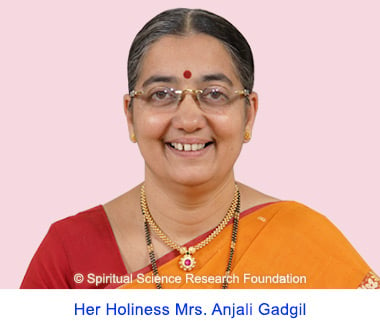 In some people the cause of body odour may be spiritual in nature. Since the cause belongs to the subtle-dimension it can be detected only by a person having a highly activated sixth sense who has access to the Universal Mind and Intellect. Medical science may find an absence of apparent pathology in such cases. Medical science would not be able to provide any attributes of the cause of the problem which is at a spiritual level. Also all efforts to treat the same at a physical level tend to fail.

The following information is Divine Knowledge received by a Saint of the Spiritual Science Research Foundation, Her Holiness Mrs. Anjali Gadgil.

5.1. Spiritual cause of body odour emanating from a seeker

The war between good and evil has been going on since times immemorial. Seekers of God who do spiritual practice to increase their Sattva component and reduce Raja-Tama are frequently attacked by negative energies. These attacks are more frequent in the current times as the negative energies are being defeated and soon the Divine Kingdom will be established. Since the negative energies are being defeated, the black energy in the cells of the seeker starts reducing and a foul smell emanates from the body of that person and may also permeate the atmosphere. This is due to the subtle-air released from the waste material of the body.

Subtle-sorcerers (māntriks), who are fighting against the seeker, transmit black energy from every pore of the skin through the medium of sweat in order to increase the pressure in the atmosphere. That is when the process of foul smell emanating from the body begins. The smell is usually caused due to lower level entities. They use the Absolute Earth Principle (Pruthvitattva) to make bad body odour. However, even if there is a subtle-battle with higher-level entities, foul smell can still be released as a by-product of this subtle-war that is taking place.

5.3. Process of creation of the foul smell in various parts of the body due to distressing energies and their effects

In order to create each type of foul smell, negative energies have to utilise 30 percent of their energy.

5.4. Odours of various regions of Hell and their effects on the person affected

6. Remedies to reduce foul odours from the body

When the cause of the body odour or bad breath is physical in nature, simple measures such as good personal hygiene (a daily bath with antibacterial soap, use of antiperspirants and deodourants, brushing one’s teeth after every meal, mouthwash, etc.), and a well-balanced diet will help.

There will also be a time factor involved as per the subtle-battle between positive and negative energies and the extent of it.

Sometimes when there is a subtle-battle where the positivity of a seeker is fighting off the black energy created by a negative energy around a seeker, then a foul body odour may occur.

Foul odour emitted from the body may be due to a physical, psychological or a spiritual cause (attacks by negative energies)

Intensifying spiritual practice as per the basic principles helps to combat the spiritual cause of foul odours emitted from the body.