Many cultures around the world believe that through our thoughts or through an envious glare, one person is able to cause harm to another in the form of illness, injury, or even death. While there are many different terms for this phenomenon, we will be using the term “evil eye” in this article.

2. What is the meaning of evil eye?

In today’s competitive and materialistic world, most people have personality defects and vices such as jealousy, hatred, hunger for publicity etc. Raja-Tama vibrations generated from these vices have a spiritually distressing effect on us. This is what is termed as getting afflicted by the evil eye. Distress experienced due to being affected or possessed by negative energies (ghosts, demons, devils etc.) is also a type of affliction by the evil eye.

While the evil eye has been viewed by many people as a pure superstition and a phenomenon that has no rational claim, they fail to recognise or understand how various aspects of the spiritual dimension can have a direct effect on us. Through our research about the various methods and rituals to remove the evil eye, we have found that the individuals upon whom the rituals were performed have experienced immediate relief from various problems which they suffered, and which could not be relieved by conventional means.

3. Who or what can be afflicted by the evil eye?

The evil eye can be cast on anyone or anything. This includes an individual, an animal, plants, as well as inanimate objects.

4. How does one get afflicted by the evil eye and what this means to us?

A seeker who has advanced sixth sense ability, Ms. Priyanka Lotlikar, has created the following drawing based on subtle-knowledge that depicts the subtle-effect of casting the evil eye. It shows the subtle-process she observed when a person casts the evil eye on another individual. 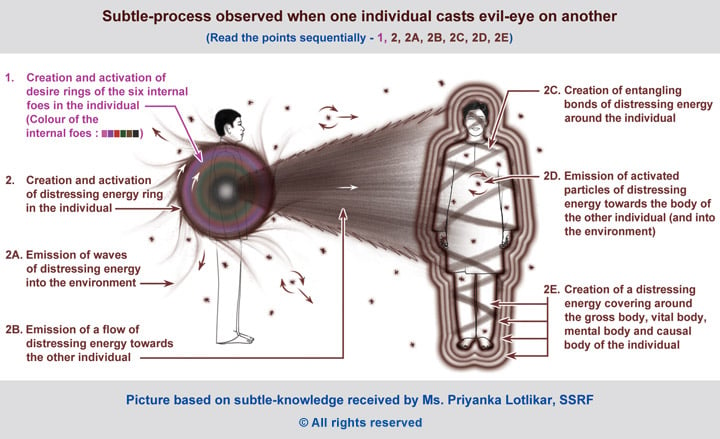 The desire-oriented waves generated in a person about another individual are transmitted to that individual and an evil eye is cast on them. From the drawing based on subtle-knowledge, we can see that the flow of energy transmitted onto the other person is Raja-Tama-predominant and attacks the gross body (sthūladēha), vital body (prāṇa-dēha), mental body (manodēha), and causal body (kāraṇdēha). This creates a subtle distressing covering around the individual and consequently the individual experiences distress.

Below we have listed some triggers of affliction by the evil eye and what this means to those who are affected.

Sometimes when people see a smiling and healthy child, they unknowingly have some desire-related thoughts. As these thoughts are Raja-Tama predominant, the child gets afflicted adversely as their subtle-body is very sensitive.

One lady experienced that after participating in a dance competition and achieving first place, she fell ill and became bedridden the very next day. After her mother performed a ritual to remove the evil eye, she immediately recovered. As she had achieved first place in the competition, the others competing against her had had envious thoughts about her and this had a direct effect on her.

Black magic is a term used to describe a ritual where specific mantras and tools are used with a specific aim to cause harm to another individual. There are some people in society as well as higher level negative energies that perform rituals like black magic. Often the people in society that perform black magic do so under the influence of negative energies.

Seekers of God who do spiritual practice for the spread of spirituality (samashṭi sādhanā) are at the forefront of the attention of negative energies. As they are working towards the establishment of the Divine Kingdom, the negative energies who wish to establish a Demonic Kingdom act to cause distress to the seekers.

Despite the attacks of negative energies, seekers of God have access to Divine protection and their spiritual practice enables them to overcome the distress and obstacles posed by the negative energies.

4.5 What does the strength of evil eye depend on?

The below table gives a comparison of the different sources of affliction by evil eye, their intensity and the spiritual power behind them.

5. Symptoms and meaning of being afflicted by the evil eye

Some symptoms of being afflicted by the evil eye include:

In the current era of the Kaliyug, as the majority of people are not doing spiritual practice, the Tama component within them and in the environment is very high. Various impressions in the mind, like greed, jealousy etc. are predominant and this means many people have strong attachments to worldly things. All of these thoughts are associated with desire-oriented responses. These impressions and desires are dominant in today’s society and this means the Tama component from them affect every person in one way or another. Due to these reasons and because the activity of negative energies is also high, the incidence of evil eye in today’s times is high.

7. Methods of removing the evil eye and the importance of spiritual practice as a means for protection from the evil eye

There are various methods of removing the evil eye using different substances, which have the ability to absorb negative vibrations. Afterwards, the substances are burned or immersed in water.

In our other articles we discuss the ritual to remove the evil eye and share in detail the various methods one can perform.

The above methods are effective in achieving immediate relief of the effects of the evil eye. When the ritual is completed, a protective sheath develops around both the affected person and the one performing the ritual. The period for which the protective sheath is retained after the ritual is completed depends upon the intensity of the spiritual emotion (bhāv) in both of them, meaning it is only a temporary solution as one can become affected by the evil eye again even after being relieved of it.

Additionally, it is important to note that the person who is performing the ritual for removal of the evil eye does it on each affected person separately. Doing it collectively on two or more affected persons, can cause the distressing energy that comes out from one person to enter the other person who is sitting close by.

By doing regular spiritual practice as per the 6 basic principles, a subtle-shield that protects us from the evil eye is formed around us and we are able to imbibe Divine waves from the atmosphere to a greater extent.