Short summary : Did you know that apart from helping one’s departed ancestors in the afterlife, the person performing the Shraddha ritual also gains positive energy ? 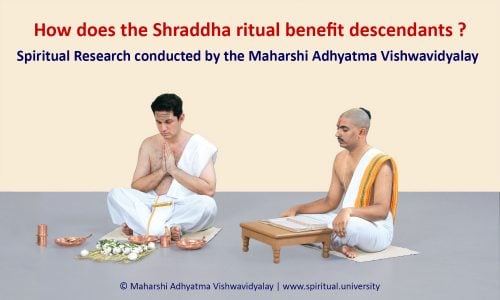 1. Introduction to how Shraddha benefits the descendant performing the ritual

The Maharshi Adhyatma Vishwavidyalay (also known as the Maharshi University of Spirituality) conducted an experiment to demonstrate how by performing Shraddha, the descendant gains spiritually positive energy. This experiment was conducted using aura and energy scanners and it clearly showed the spiritual benefit to the person performing Shraddha.

2. Experiment setup and methodology to study the effect of Shraddha 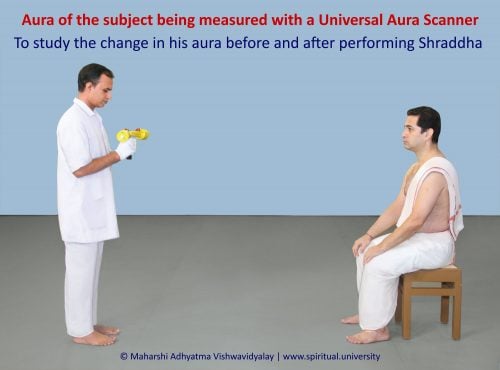 3. Key observations and analysis from the Shraddha ritual experiment 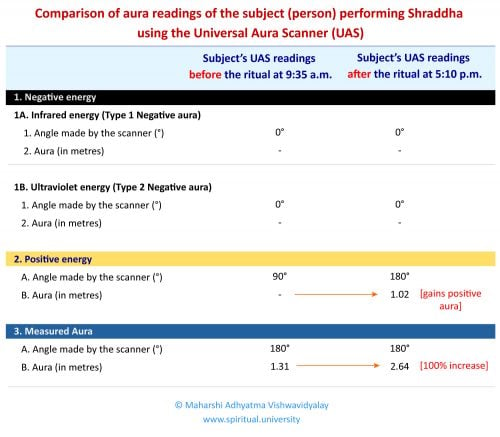 The significant increase in the positivity of the subject (the descendant) was due to the following reasons :

What this experiment shows is that the subject (descendant) was positively impacted by performing the Shraddha ritual. The UAS was able to pick this up to a certain extent. However, the enormous positive effect that such a ritual has on the departed ancestors and their blessings on the descendant for performing Shraddha can only be truly assessed using advanced sixth sense. At the Maharshi Adhyatma Vishwavidyalay, we have seekers in the Spiritual Research Team who can actually perceive the subtle dimension with a high level of accuracy just as we do the physical dimension. They report that such rituals, especially when conducted with spiritual emotion, go a long way in helping the departed ancestors to move further in the afterlife. The spiritual research team at the Maharshi Adhyatma Vishwavidyalay urges everyone to perform Shraddha as per their capacity at least once a year during the period of Pitrupaksha. For us, it does not require that much effort, but for our departed ancestors, this one ritual provides them with spiritual energy for a year.

Ancestors – How to help