The case history in Cyriaque’s words

1. What was the problem?

By nature, I was a very introverted, extremely shy and tense person who could not mix well with people.

The trouble started during my teenage years, though I cannot put a finger on exactly when the trouble started. On many occasions, I would have some strange feelings as if I was witnessing some weird incidents and I was not myself. The following were some of the incidents which were quite out of character for me:

I was also addicted to cigarette smoking. I would smoke one to one and a half packs of cigarettes a day. Along with smoking sometimes when we went to a party, I would drink a lot of alcohol. Many times I had no desire or need for a drink, but would nevertheless find myself drinking.

I felt that there was something amiss with me. At first I thought I may be suffering from some sickness. Afterwards I began to think I must be a little crazy. I did not know how to resolve the problem and felt reluctant to go to a psychiatrist.

In February 1999, I came in contact with Yoya (now my wife since 6 years) and her mother Dragana. One evening we went to have dinner in a restaurant in Milan, Italy. Dragana was sitting to my right. During the course of the evening, Dragana started getting fidgety as she felt that some unpleasant electrical current was surrounding me. She tried to touch my right shoulder and felt as if the electric current that she felt was burning her. She felt that something strange was going on. Then she placed her hand above my forehead at a distance of about 10 cm. (Later she told me that she did not have any idea why she placed her hand on my forehead.) However, at that very moment, I was consumed with inexplicable anger. I got up from the table and went to the bathroom. I was so angry, I wanted to break the mirror.

Two to three days later after the incident at the restaurant, I went with Yoya to her home. Dragana told me that she had asked His Holiness Dr. Athavale about the reason for my anger and what was happening to me. He had said that the cause of my distress was from the subtle-bodies of my departed ancestors and that I needed to chant the Name of Lord Datta to alleviate the problem.

Intuitively, at that very moment, I knew this was the answer I had been looking for. I had an intense urge to start chanting that very second to free myself from these erratic thoughts and moods that I had been experiencing. Looking back, I cannot explain this urge to chant the Name of Lord Datta as the whole concept was alien to me. But I remember having the thought that I had nothing to lose by implementing the chanting.

As it was the first time I heard the Name, I could not repeat it properly so I asked her to write It on a piece of paper. Then I immediately went into the bathroom to be alone so I could chant. When I sat and took the paper in my hands, I was feeling a little strange and had difficulty in pronouncing it properly.

So I prayed to God, “Please God I don’t know how to repeat this Name. Please chant for me”.

My prayer was answered instantly as the chanting started automatically from within. I felt it working inside me, going very fast as if in a spiral.

This experience is a manifestation of the effect of the chanting on the subtle-bodies of Cyriaque’s departed ancestors and the resultant spiritual cleansing.

After a few minutes, I got up and was feeling very dizzy. I could not even stand on my feet. As I got up to leave the bathroom while chanting intensely, I felt myself nailed to the bathroom door with force. I yelled out for help. Dragana came almost immediately and helped me to walk away from the door and spoke something to me in a loving tone.

One of the entities within me snapped back at her saying, ‘Look how powerful I am’.

Entities such as ancestors’ subtle-bodies, ghosts (demons, devils, negative energies etc.) are privy to the happenings in the lives of the person whom they possess at all levels – from gross to subtle, depending on the extent of their possession. One of their characteristics are that they are egotistical.

I myself felt as if I was eight meters tall. At that time, something told me that there were eight ghosts within me and that one of them was the strongest.

This is an experience directly related to the subtle-bodies of the ancestors. Due to the effect of the chanting of the Name of Lord Datta, the subtle-body of the ancestor was experiencing severe distress and as a result was forced to surface and manifest externally. When the subtle-bodies manifest grossly, the person’s consciousness of their own identity is very much clouded by the awareness of the consciousness of the entity. As the departed ancestor does not have a gross body (sthūladēha), their experience of ‘self’ is limited to their subtle mental body which can be eight meters tall. This was also an attempt by the ancestor’s subtle-body to show off its power.

I told this to Dragana. Then Dragana helped me to lie down.

3. Resolving to overcome my difficulties with spiritual practice

Two days later Yoya spent the evening with me. That night, I had the feeling that the subtle-body of the ancestor within me had bad intentions for Yoya. Then in the morning, I took Yoya back to her home.

On the way back from Yoya’s place I had an intense desire to fight this ancestor’s subtle-body within me. I made a resolve that I would not stop until it went away. At that time, I was in a metro (underground railway) and I became very angry. Some people moved away from me. The anger within me was such that when I was holding the rail in the metro I felt I could break it. Internally, I understood that the ancestor was angry as I decided to fight.

I was scared but then I heard a soft voice saying, “Don’t worry, I am with you.”

Even when walking from the metro to my home, some people moved away from me. When I arrived home I sat on the bed and started chanting. Within a few minutes, I collapsed and started twisting around. After some time I sat again and chanted again until my body collapsed. I experienced a sensation like my body was being lifted above the bed some 20 to 30 cm. It was really eerie. I would not experience the sensation of my gross body but I had awareness only of the subtle-body. I felt as if I was undergoing spiritual surgery to remove the subtle-body of my ancestors from me. Throughout this process, I did not experience any pain. I barely slept or ate. It all lasted for two days or so. Then all of a sudden, I felt like the main ancestor’s subtle-body left my body.

Yoya is also a seeker being guided in her spiritual journey by SSRF. She has the unique ability to perceive and represent the subtle-world graphically and has created many drawings based on subtle-knowledge to this effect. Yoya created drawings based on subtle-knowledge of what she saw happening to me over the two days. The drawings are a representation of what happened at the subtle-level to bring about the remarkable change in me. 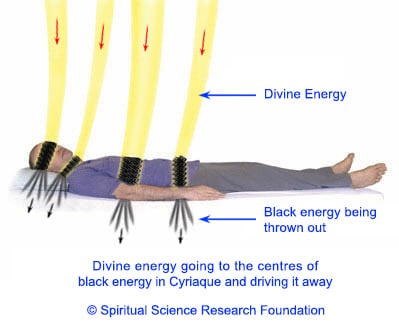 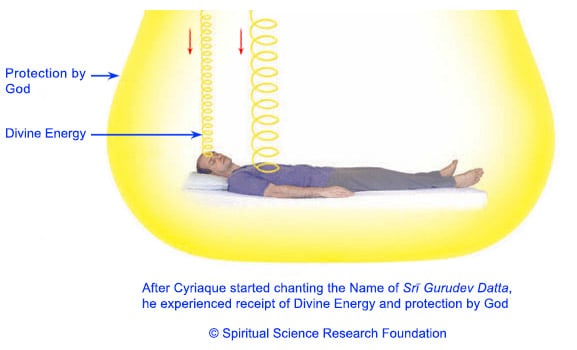 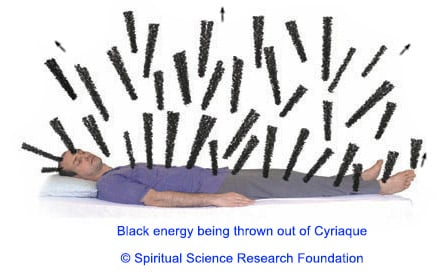 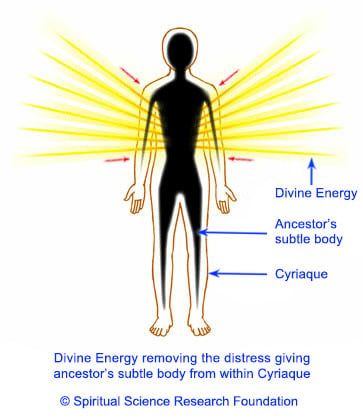 After the two day period, I felt completely drained physically. When I tried to smoke a cigarette, I could smoke only half the cigarette and had to stop.

Slowly and steadily I began feeling much lighter. My smoking habit stopped completely as I felt I had no need to smoke. Along with this the negative thoughts stopped coming to my mind. I became more open and communicative.

Over the course of the next few months some of the earlier symptoms resurfaced. I was informed that I had been affected with a whole batch of ancestor’s subtle-bodies. So I continued the spiritual treatment of chanting 3 mālās (A mala is a string of 108 beads i.e. 3 X 108 = 324 times) of the Name of Lord Datta daily. Later that same year in December 1999 when we met H.H. Dr. Athavale for the first time in Goa, India, He told me to increase the chanting to 9 malas (9 x 108 = 972) as the problem of being affected by subtle-bodies of ancestors was severe.

In the months that followed, many a time I would experience some distress but the difference was that this time around:

Please read our section on chanting

Even though initially my mind was full of doubts about spiritual practice, I persevered in the spiritual practice of chanting on a daily basis. I also always remember the initial experience that I had and it gives me strength to know that this is the correct way and keeps me steadfast on this path even though the initial symptoms have now long since subsided.