1. Introduction to a study about the spiritual benefits of Tulsi or Holy basil

Tulsi (Ocimum tenuiflorum) or Holy basil is regarded as the holiest of all plants. The plant is cultivated for religious and medicinal purposes, and for its essential oil. It is widely known across South Asia as a medicinal plant and commonly used in Ayurveda. Ayurveda is a system of traditional medicine native to the Indian subcontinent and is a form of alternative medicine.

The spiritual level of a person can only be ascertained through the medium of an advanced sixth sense. However to study the effect of the Tulsi plant on the environment, SSRF used two biofield imaging machines which are Resonant Field Imaging (RIF) and Polycontrast Interference Photography (PIP).

The spiritual level of a person is also a function of the proportion of the three subtle components that a person is made up of. The higher the Sattva component, which represents the spiritual purity in a person, the higher is the spiritual level of the person. Due to the high level of sāttvikta present in Saints, they positively affect everything and everyone by their mere presence. As H.H. Dr. Athavale is a Saint of the highest level, it has been observed that many objects used by Him are showing visible changes due to the Divine conciousness emanating from Him. Read more about the phenomenon on progressive changes in objects due to positive spiritual energy.

Through spiritual research SSRF has found that the Tulsi plant has the highest levels of the Sattva component amongst plants. In October 2013 Divine particles had appeared for many days on every leaf of the Tulsi plant that H.H. Dr. Athavale watered each day on His balcony. This was due to the plant being exposed to the Divine conciousness emanating from H.H. Dr. Athavale.

If one has an above average sixth sense ability, one can easily perceive the spiritually pure nature of the Tulsi plant watered by H.H. Dr. Athavale and the positive vibrations that it emanates. Some biofeedback equipment such as the RFI (Resonant Field Imaging) and PIP (Polycontrast Interference Photography: a biofield imaging type of equipment) are able to pick up the vibrations around an object and display it in a visual format. This gives an average person the opportunity to visually see the aura or energy field of an object and its surroundings.

Using the PIP biofield imaging device we took three readings which were:

Let us now examine each of the auras displayed by the PIP biofield imaging device.

3.2.1 The environment with no Tulsi plant

This is an aura image of the environment when it was empty and no Tulsi plant had been placed. As one can see from the picture below, the main colours seen are orange and violet, which indicate negativity. The colour green, which indicates positivity, has been pushed back due to the orange. This was the baseline reading of the environment before we placed Tulsi plant A. 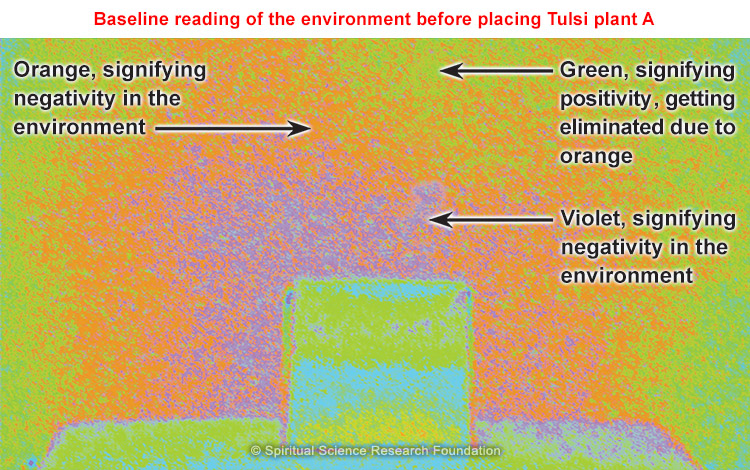 3.2.2 The environment with a Tulsi plant that had been watered by an average person – Tulsi plant sample A

In the next stage of the testing, a Tulsi plant that had been watered by an average person was introduced into the same environment. As one can see from the diagram below, there is a significant change in the aura in a matter of five minutes. The negatively associated colours have dissipated and colours that are considered positive such as green and traces of light blue are predominantly seen. This shows that a Tulsi plant has a positive impact on the environment. 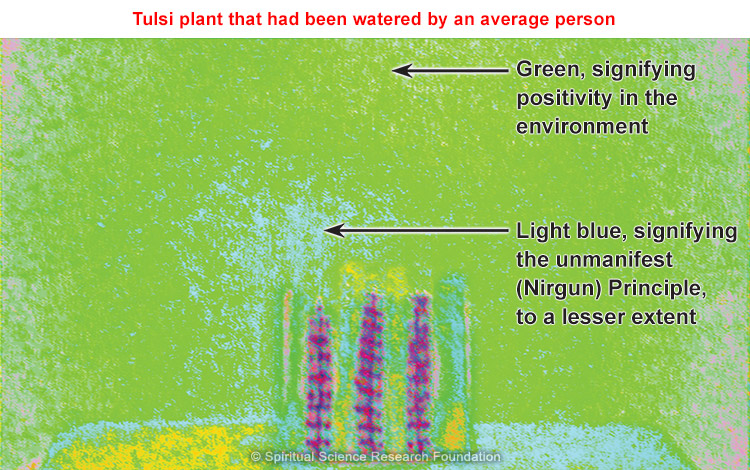 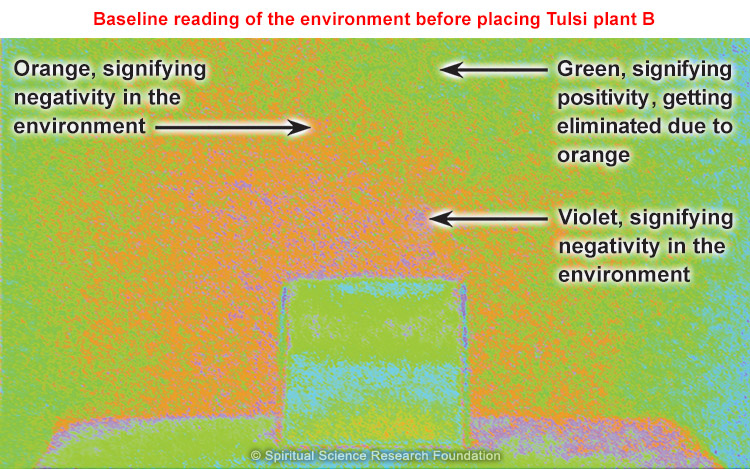 3.2.3 The environment with a Tulsi plant that had been watered by H.H. Dr. Athavale – Tulsi plant sample B 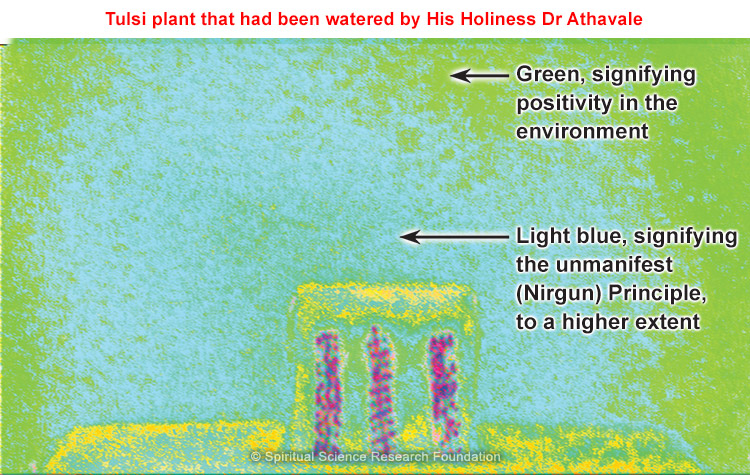 3.2.4 Summary of conclusions and significance

In this experiment the results of the biofield imaging devices only endorse the findings obtained through sixth sense about the spiritual purity of a Tulsi plant and the immense benefit of the presence of a Saint. The following are the key points established by the experiment.

The above scan and analysis has been done with the help of Mr. Santosh Joshi (Universal Energy Researcher, Mumbai, India).

SSRF appeals to scientists and experts in the field to join us in studying the various unexplained phenomena in the Spiritual Science Research Centre in Goa, India