To dowse is basically to search, with the aid of simple hand held tools or instruments. These instruments include Y-rods, L-rods and pendulums.

By using these instruments, dowsers believe that they are able to find things which are otherwise hidden from view or knowledge. Historically, dowsing has been primarily used for finding water beneath the surface. However, apart from locating water and minerals dowsing has also been used for other purposes.

For example, using a pendulum, dowsers believe that they can ask questions about a person’s life and get ‘Yes’ and ‘No’ answers, depending on the movement of the pendulum, after the question is asked to the pendulum. The questions answered with the means of a pendulum are manifold and include questions regarding relationships, investments, authenticity of things and even asking about the future.

2. How we came to use dowsing with a pendulum as a spiritual research tool

2.1 Reports by seekers about their dowsing experiences

Some seekers of SSRF practise dowsing using a pendulum. When they dowsed pictures of H.H. Bhaktaraj Maharaj (Inspiration of SSRF), SSRF incense-sticks etc., they found that the pendulum showed movement in a clockwise, that is, positive direction. When they dowsed negative objects, such as objects affected by negative energies, the pendulum showed movement in a negative, that is, anticlockwise direction. They reported their findings to us. This made us realise that spiritual positivity or negativity can be gauged by dowsing with the help of a pendulum. This gave us an idea that dowsing could be used to demonstrate the intangible spiritual dimension to the world.

2.2 Input by our subtle-knowledge-section on reliability of dowsing using a pendulum

So we asked seekers with an advanced sixth sense from our subtle-knowledge section about the claims of dowsers. They told us that the ability to catch subtle vibrations and move accordingly is a salient feature of a pendulum and that dowsing using a pendulum was indeed a reliable divination method as long as certain basic principles were adhered to. These principles include ensuring that:

This can be ascertained only through an advanced sixth sense. We decided to conduct our own study using the pendulum as a dowsing tool to map the extent of positivity or negativity in sattvik and non-sattvik objects and persons.

3. Nature of our research

We conducted a number of experiments using the pendulum as a dowsing tool.

3.1 How our study differed from regular dowsing 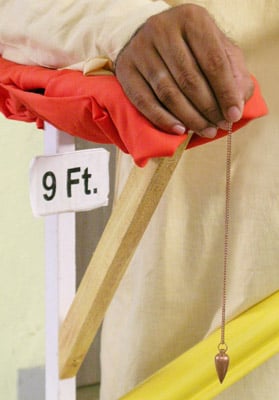 3.2 Unique feature of our study – input from the subtle-knowledge section

The unique feature of our research is that seekers with an advanced sixth sense from our subtle-knowledge section were present throughout the experiments and they did subtle analysis of significant events in the experiments. 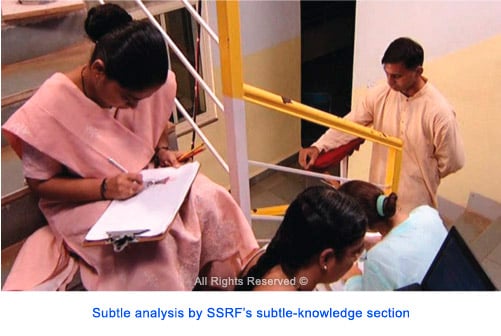 We also showed the readings obtained from the experiments and our observations to the seekers from our subtle-knowledge section and asked them questions regarding the subtle reasons underlying the observations. This way, the information obtained from the tangible readings was complemented by the knowledge provided through the advanced sixth sense. This completed the picture and gave us a clearer idea of what was actually happening in the spiritual dimension.

Metals are good conductors of energy. That is why we chose a metallic pendulum for our study. It is also the most sattvik material from amongst the various materials that pendulums are made from, such as crystals. Hence, it is the most sensitive. We used a metallic chain instead of thread, which is widely used, again because a cotton thread is a bad conductor of energy.

4.2 Why we chose this particular shape of the pendulum

4.3 Why we chose a human dowser

In the preliminary stages before actually embarking on this study, we experimented using the pendulum hanging on a wooden stand by itself. We placed positive and negative objects under the pendulum. We found that the pendulum did show appropriate movement. However, it was too feeble to record. At times it was so feeble that we could barely discern the direction of its movement. This is because wood is a bad conductor of energy.

The human body is a good conductor of energy. That is why we decided to opt for a human dowser. As the dowser himself can conduct energy, it adds to the motion making it clearly discernable and hence easily recordable.

4.4 Why we chose a spiritually positive dowser

In all our experiments, unless it was the requirement of that experiment, we used a dowser above the 60 % spiritual level without negative energy distress. The high spiritual positivity of the dowser radiates outwards and lends lightness to the pendulum and makes it sensitive to the vibrations emanating from the object or the person being dowsed.

Also, if the negativity of the subject or object being dowsed is high, then this negativity will shoot through the pendulum affecting the dowser. This is less likely to happen if the dowser is at the spiritual level of 60% as the negativity is counteracted by the dowser’s inherent spiritual positivity.

5. Unique findings from the research

In the course of this research, the input from our subtle-knowledge section regarding various observations in the experiments revealed a wealth of knowledge on the basic principles we mentioned above, both about dowsing and the different variables we tested. For example,

We will be sharing the details of this spiritual research with our readers in a series of articles, wherein each article is dedicated to a single experiment.