Most of us may be aware that dowsing with a pendulum is sometimes used to ‘divine’ answers to questions regarding location of ground water and minerals, relationships, investments, authenticity of things and even asking about the future. However, the accuracy of the ‘divination’ depends on a number of variables. In this study we tested one such variable – whether the presence or absence of negative energy distress in the dowser influences the accuracy of the answer.

To better understand this experiment do read our article Introduction to spiritual research using a pendulum.

2. Methodology of the experiment

To begin with, we asked a seeker with an advanced sixth sense from our subtle-knowledge section, Mrs. Anjali Gadgil, to perform a subtle analysis based on subtle-knowledge about the object to be dowsed in this experiment, and to keep a record of the findings. This was done so as to determine the baseline spiritual reading of the object that we would later compare the results against.

We then asked her to place the object in an envelope, seal it and hand over to us for the experiment. None of the staff or the subjects involved in the experiment knew about the contents of the sealed envelope. We marked the surface of the envelope in concentric circles at a distance of 2 inches (5.08 cms). This was to facilitate taking readings of the distance the pendulum travelled. 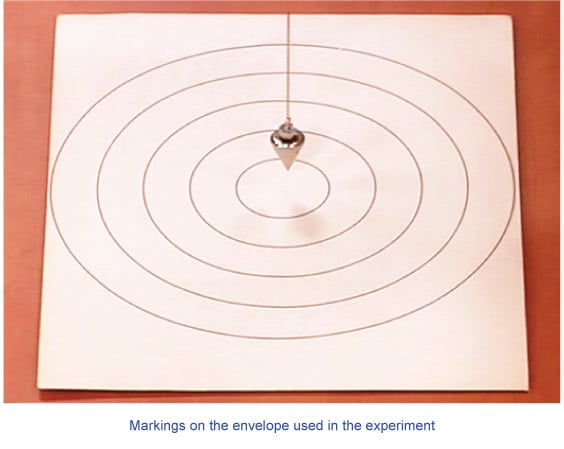 We then asked Mrs. Gadgil to do a subtle analysis based on subtle-knowledge of the two subjects participating in the experiment. She reported that the first subject, Ms. Lola, did not have negative energy distress, and that the other subject, Ms. Elisabeth, had negative energy distress. Mrs. Gadgil was present during the entire experiment and was doing a subtle analysis of various significant  events during the experiment. We then asked our first subject, Ms. Lola, to start dowsing above the sealed envelope using the pendulum at a height of 1-2 inches from the envelope. We asked her to steady her hand by placing it on her folded leg.

The readings were noted.

We then asked our second subject, Ms. Elisabeth, to repeat the dowsing experiment on the same sealed envelope using the same pendulum. The same distance from the sealed envelope was maintained and the hand was similarly stabilised.

The readings were noted. Ms. Elisabeth also shared her experiences during the course of the dowsing. 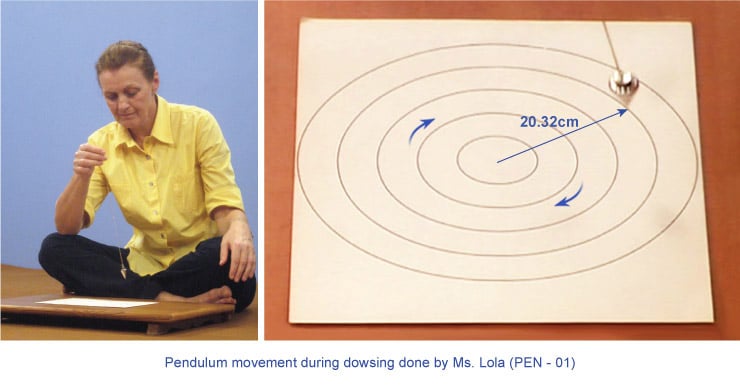 3.2 When Ms. Elisabeth did the dowsing 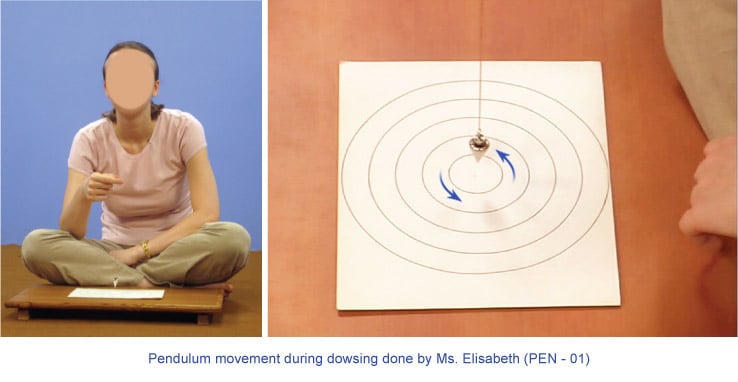 Subjective experience of Ms. Elisabeth: When the sealed envelope was brought in front of me I felt as if negative energy was getting released from my body. I felt like moving away from the envelope. I began to feel drained out. As I continued with the dowsing, I began to feel some positivity coming to me from the envelope. Then I felt that I was receiving good energy from it and felt better.

Since the place, time, the object on which dowsing was done and the pendulum used for dowsing were the same, the same or at least similar readings were expected. However, we found contradictory readings. Since there was apparently no explanation at the tangible level for this, we asked Mrs. Anjali Gadgil to explain to us what exactly was happening in the subtle dimension based on her subtle analysis done during the course of the experiment. She explained to us the subtle reasons underlying the readings.

4.1 Nature of vibrations from the object

Mrs. Gadgil explained that the object in the sealed envelope emanated strongly positive vibrations. Then the envelope was opened and there was a picture of Srīkrushna in it. 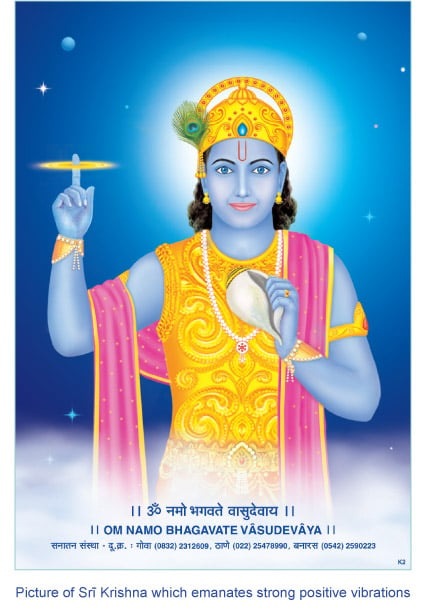 Srikrushna is a Hindu Deity. Deities are a form of the God Principle and their visual form emanates strong positive vibrations. This is especially so if the Deity is depicted in a way that significantly reflects its true form. The picture of Srikrushna which was used in this experiment is such an example.

4.2 Significance of direction of movement of the pendulum

4.3 Reason underlying the anticlockwise movement when Ms. Elisabeth did the dowsing

6. Key points learnt from this experiment

6.1 Importance of the dowser being free of negative energy distress

Ascertaining whether the dowser is free of negative energy distress cannot be done at the level of the five senses, mind and intellect. This can be done only by doing subtle analysis using subtle-knowledge.

6.4 Importance of Srikrushna’s picture as a spiritual healing remedy

This experiment revealed that the positive energy in Srikrushna’s picture fought with the negative energy of the subtle-sorcerer distressing Ms. Elisabeth, thereby reducing the black energy stored in her by him. Most of the problems in our lives, from various physical and psychological illnesses to marital and financial problems, are due to the black energy of the negative energies. Hence, contact with pictures of Deities such as Srikrushna, which reduces the black energy of the subtle-sorcerer, is a good spiritual healing remedy. We can ensure continuous spiritual healing benefit by carrying such a Deity’s picture in our wallet, or by wearing it in a locket, etc. The benefit increases manifold, proportionate to our faith in the remedy.

Our subtle-knowledge section did subtle analysis of the readings of all the experiments. Their subtle analysis showed that at times the underlying reasons for two similar readings provided by the equipment were diametrically opposite. However, the modern scientific world recognises similar readings as similar events. From this perspective, the subtle-knowledge section explained the limitation of scientific equipment in research and their role in day-to-day life as diagnostic tools. Read more on this in our article ‘Commentary on the limitations of modern equipment used in research studies‘