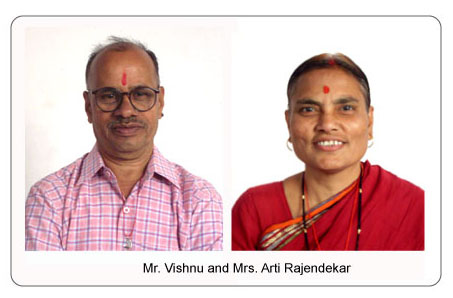 This case study describes the appearance of peculiar scratch marks on kitchen utensils used by Mr. and Mrs. Rajendekar and their family, who have been doing spiritual practice under the guidance of SSRF since 1998. They devote all of their time to spreading spirituality and helping others understand the importance of undertaking spiritual practice.

2. Experiences prior to the attack

All family members experienced an overall increase in distress, prior to the appearance of the scratches in 2004.

Following are some examples of distress experienced at Mr. and Mrs. Rajendekar’s home:

A subtle attack by negative energies is often preceded by increased distress. This can be experienced in various ways.

Later that year, when a Saint, His Holiness Kalidas Deshpande visited them, He too impressed upon them, that distressing vibrations could be experienced in their home.

Saints are able to perceive the spiritual dimension with accuracy.

Then one day, while cleaning grains, Mrs. Arti Rajendekar suddenly noticed that all the utensils in the house had pierce marks and scratches on them. She was puzzled because she had not used any sharp objects while cooking nor while cleaning the vessels. She enquired with the other family members but they too were unable to explain the scratch marks.

The slideshow below shows the various scratch marks on the utensils ,made as if they had been scraped by a sharp object. 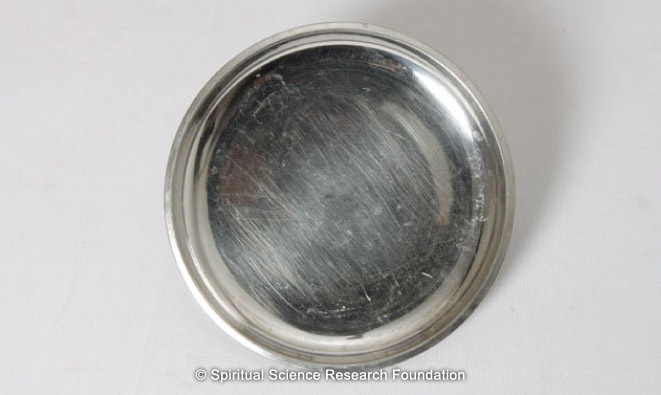 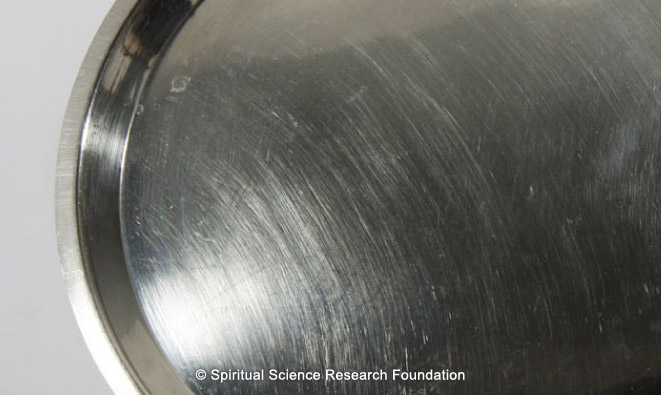 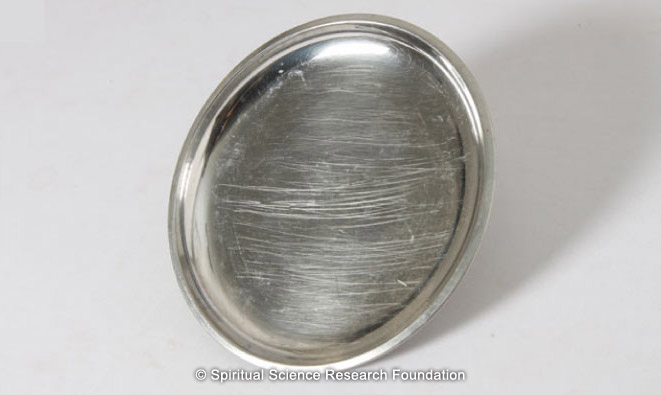 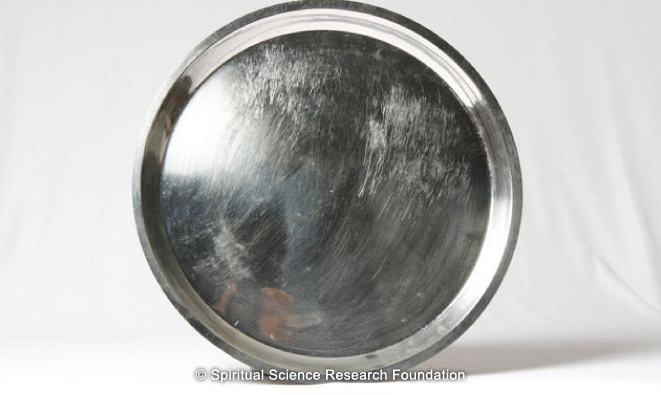 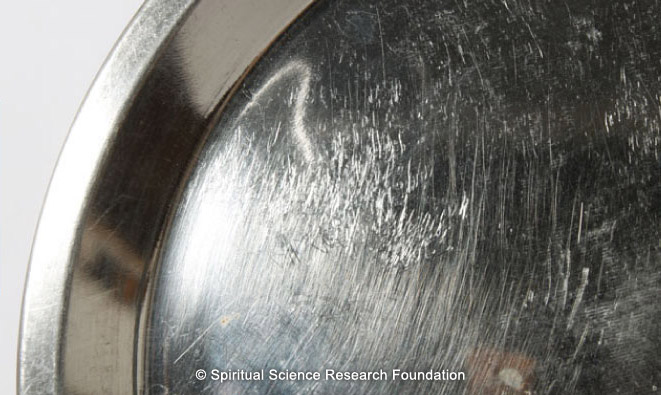 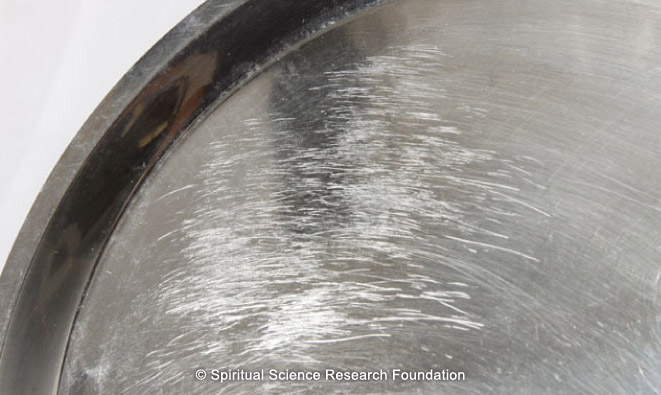 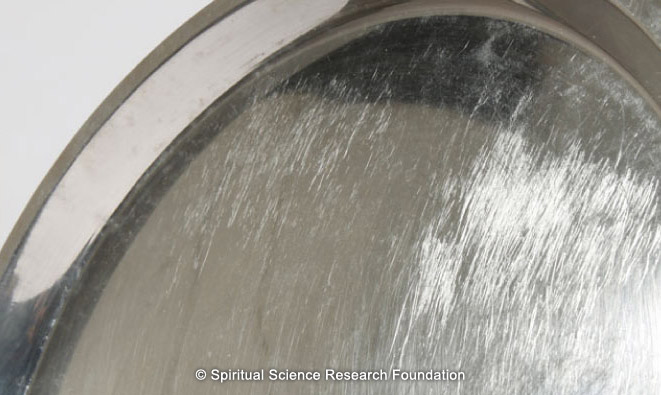 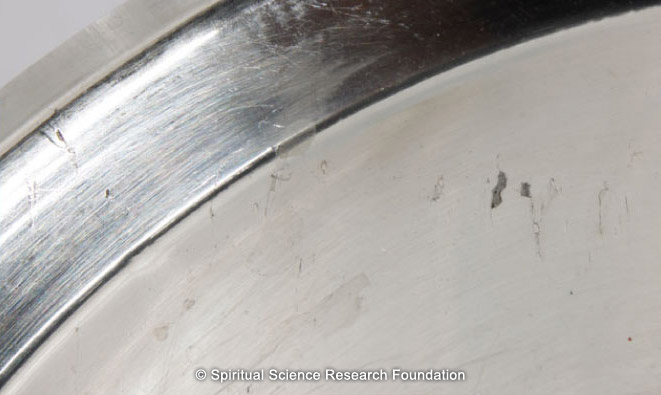 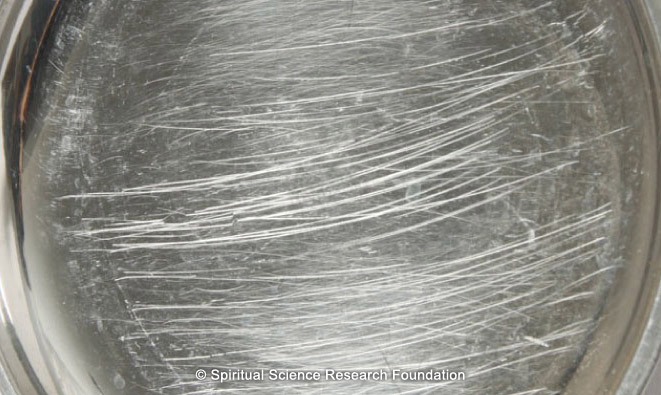 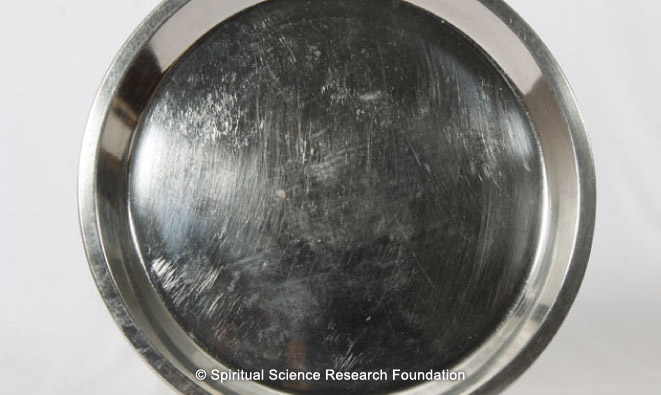 After this, Mrs. Rajendekar was severely affected by negative energies. The distress she had been experiencing before discovering the scratch marks increased manifold. She was continually unwell for 3 months. She had severe stomach ache, and could hardly eat. She also suffered from urinary tract infection.

At that time her father, late Raja Bhau Deshpande arrived at their home. He also started experiencing a lot of distress caused by negative energies. He perceived the presence of ghosts and he would wail after that. His behaviour became quite unusual and erratic. For example he would have fits of anger and he would bang his head against the wall. He became psychologically unstable, kept babbling about ghosts, negative energies or about anything at all.  He would leave the house for long periods of time. He became ill and would not eat much.

Mr. and Mrs. Rajendekar narrated all these incidents to H.H. Dr. Jayant Athavale. He confirmed that they were caused by negative energies and advised spiritual remedies like washing the kitchen utensils with Holy water (water mixed with Holy ash), lighting incense sticks in the kitchen, chanting, etc. He also advised specific spiritual remedies for Mrs. Arti Rajendekar, such as drushta (a ritual to cast off the evil eye from a person affected by negative energies). She was advised to have drushta performed on her by waving a coconut around her seven times. This was to be done for seven days. After performing these spiritual remedies the distress reduced.

During the ritual of drushta using a coconut, the coconut is usually waved around the person three times. However in this case, the spiritual remedies were prescribed by an evolved spiritual guide. In order to take benefit of an evolved Saint’s resolve (sankalpa) for the healing to occur, it is necessary to adhere to the specific advice given by Him or Her.

Due to the severity of the attack, even today the utensils have pierce marks and scratches on them. However the intensity of the black energy emitted through them has reduced.