This is a case study of a different type of spontaneous combustion. No fire took place, however a residue of soot was seen all around, as if a fire had indeed taken place. The incident is narrated by Mrs. Sharon Clarke-Sequeira, a seeker doing spiritual practice under the guidance of His Holiness Dr. Athavale.

2. The events prior to the incident 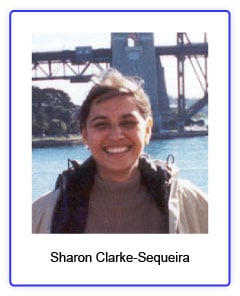 This strange occurrence took place in July 2003. I had gone down to Melbourne, Australia to spend time with the Australian seekers of SSRF and to attend Gurupourṇimā (Gurupournima is a festival where seekers of God express their gratitude to the Guru Principle or the Teaching Principle of God). I was staying with 2 seekers, Vamsi Krishna and Sean Clarke (who is my brother) at their residence and which also was the sēvā kendra in Melbourne (a seva kendra is a place where seekers reside to collectively serve the spread of Spirituality). Just before Gurupournima, seekers had gotten permission from the landlord to paint the house in preparation for the festival.

I remember that on the day of the Gurupournima festival, seekers had experienced an awakening of spiritual emotion (bhāv) and that quite a number of people had attended the lecture. We had also put up various slides of pictures and drawings based on subtle-knowledge to better illustrate various spiritual concepts.
Just the day before, one of our seekers from Europe called us to say that a ghost had manifested in one of the seekers there. She warned us saying that the manifesting ghost had threatened that the negative energies had a plan to attack the Melbourne seva kendra. We were surprised by this warning and at that time could not fathom what means of attack they would use.

The next day, a cold wave had hit Melbourne. I decided to sleep in the living room where the lecture had been held so that I could use the electric heater. I closed all the windows, put on the electric heater and as a spiritual measure of protection, I had kept a small ghee (clarified butter) lamp burning in the corner. When Sean woke me up in the morning, we were amazed to see that overnight, a thin film of black soot-like residue had developed on all the freshly painted walls, floor, doors and furniture. The pictures of Deities had the highest amount of residue on them.

The slide show below shows the various things that had been attacked. 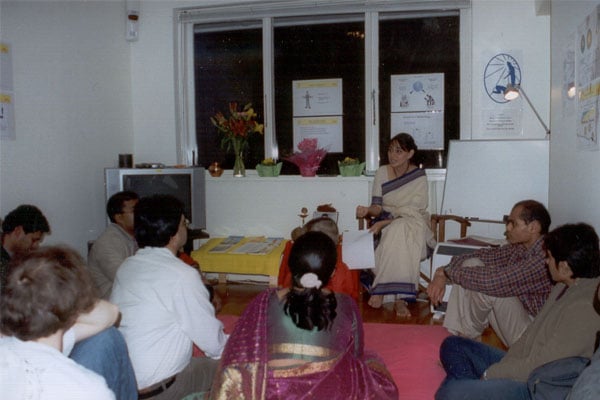 The room that was used for the Gurupurnima lecture was attacked. 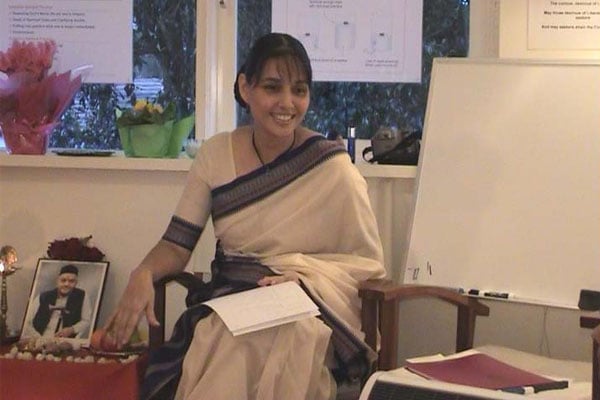 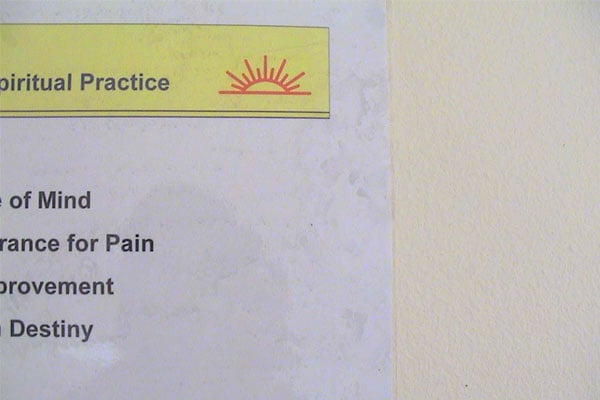 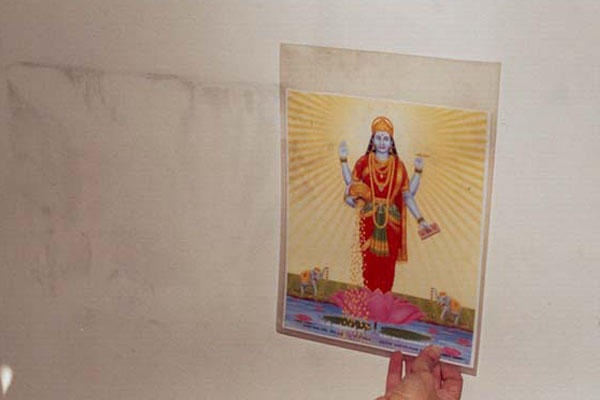 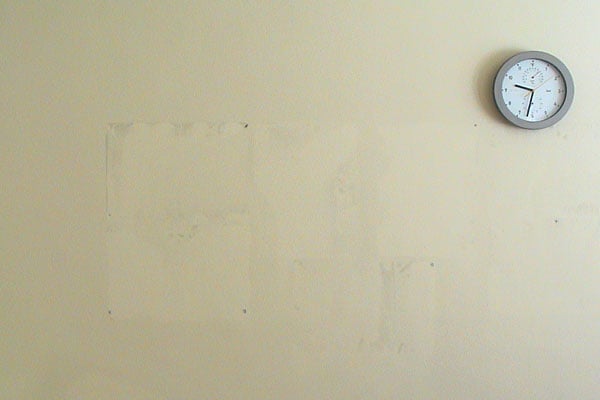 After the pictures were taken off the wall, one can see soot like layer as compared to no soot on the section of the wall behind the pictures 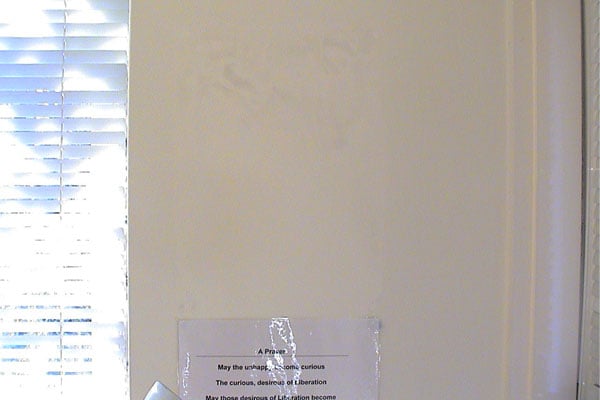 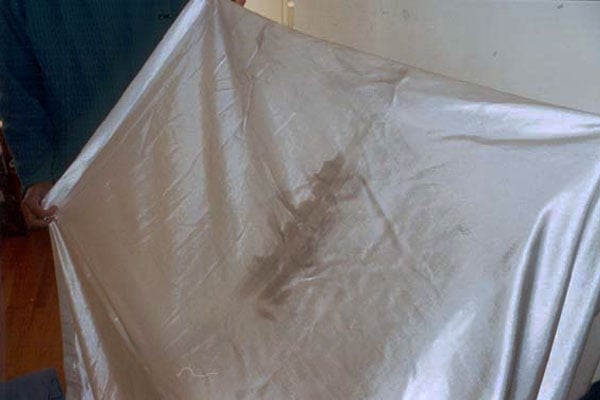 Soot like stains on the bedsheet. It was not possible for the soot to have physically reached there because the bedsheet was covered by a quilt 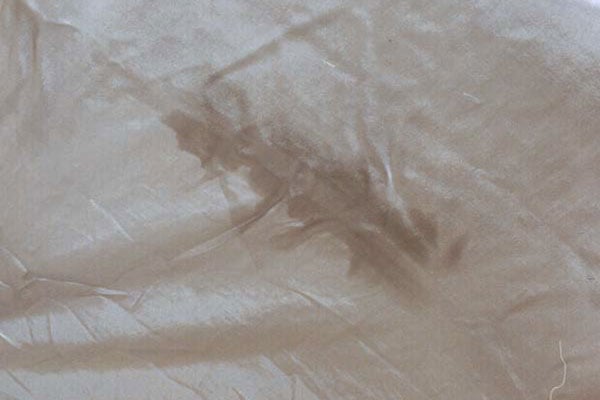 A close up of the bedsheet with soot like stains

Borders containing the Shrī Krushṇa principle have been drawn around the article so that readers do not feel distressed while looking at the images or reading the information given above.

There was no possibility of the small ghee lamp causing such a black ‘soot-like’ residue to appear all over the room. Ghee is not a type of fuel that creates soot and nor was the quantity of ghee burned that night capable of creating such a widespread cover of soot in the room. We had lit a ghee lamp on many occasions in similar conditions but nothing like this had ever happened. When we saw our bed linen too, there were soot-like stains on them. This too was not physically possible, as for the soot to have stained the sheet it would have needed to get past the quilt and our bodies. Interestingly, there was no soot-like residue on our clothes or bodies. After ruling out any reasons for this occurrence at an intellectual level, we assumed that it had been a negative energy attack.

We felt that the intense spiritual activity during Gurupournima along with many lectures of SSRF being conducted in various parts of the city had enraged the negative energies and that they were trying to intimidate us with this attack. However we just treated the entire occurrence as something that needed to be recorded and studied. So we photographed all the blackened objects and emailed the photographs and report to the SSRF subtle-department. After that, four of us seekers got buckets and sponges and set about the huge task  of cleaning the soot that was just about everywhere.

When later speaking to the subtle-department at the SSRF research centre, they confirmed that it had been an attack by negative energies. They asked us to play Holy songs sung by H.H. Bhaktaraj Maharaj in the room continuously to spiritually purify the room and rid it from the effects of this subtle-attack (The Divine consciousness or Chaitanya from hymns sung by higher level Saints act as a powerful spiritual healing measure).

This unusual phenomenon has never happened again at that residence, even though the same physical conditions of lighting a ghee lamp and closing the windows with that heater on were replicated in that room.