Are famous paintings by famous artists worth it? 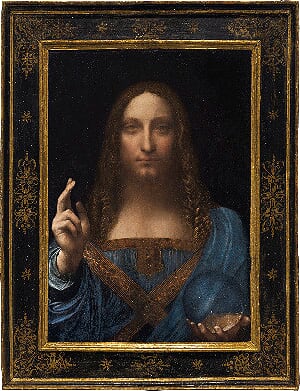 In 2017, Leonardo da Vinci’s Salvator Mundi sold for a record-breaking $450.3 million. Art lovers may understand why the painting sold for such a high price. After all, this was the last da Vinci painting in private hands. While this price was extraordinary, art collectors regularly pay exorbitant amounts for artwork that art critics deem to be valuable. People buy expensive art for different reasons, including having an emotional connection with the art, decorative purposes, and prestige. Many of the benefits associated with buying expensive art are classed by economists as ‘psychic benefits’, which are intangible and related to enjoyment and experience.

Art lovers flock to auction houses and museums to view famous works of art. However, the spiritual aspects of artwork and the vibrations that they emit are never taken into account in the valuation of art. SSRF and the Maharshi Adhyatma Vishwavidyalay (MAV) have found that there are other intangible aspects related to art that the modern artist and art lover can consider. We wanted to test the spiritual vibrations of famous artwork compared with those drawn by seeker-artists.

SSRF and MAV have conducted in-depth research on art for over 3 decades. This research focuses on how art can be made in a spiritually pure way so as to benefit the observer and the environment. The results are ground-breaking and have the potential to reshape the way the world views art. In the last article in this series (coming soon), we presented research showing how a digital painting of Deity Ganapati has been made in a spiritually pure way, and the benefits associated with it. SSRF and MAV have also conducted spiritual research into paintings made by famous artists especially those paintings that are pictures of Deities, and an example of this research is presented below.

2. A deity’s picture drawn by a seeker versus the same deity drawn by a famous artist

The spiritual research team wanted to understand whether pictures of Deities drawn by famous artists have the same spiritual positivity as the ones drawn by a seeker-artist under the guidance of His Holiness Dr. Athavale. To conduct this experiment, 3 paintings of Deity Lakshmi (who is the Goddess of wealth), were compared. The first was a painting of Goddess Lakshmi that was painted by a famous artist. The second was a commercially available painting and the third was a digital painting drawn by a seeker-artist from MAV. 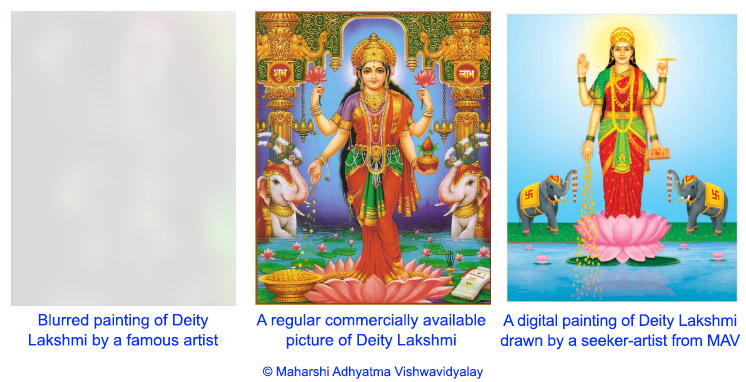 Three separate experiments conducted to study the spiritual positivity or negativity of the paintings above are given below.

2.2 Using PIP technology to compare the subtle-vibrations emitted by paintings of Deity Lakshmi

In the first part of this experiment, Polycontrast Interference Photography (PIP) was used. Below are the corresponding PIP pictures of each of the three paintings of Deity Lakshmi mentioned above. They have been compared to a baseline reading of the environment where the experiment (using PIP) was conducted. The baseline reading was taken of an empty room with a table and an empty picture frame where the various pictures were thereafter placed one by one. 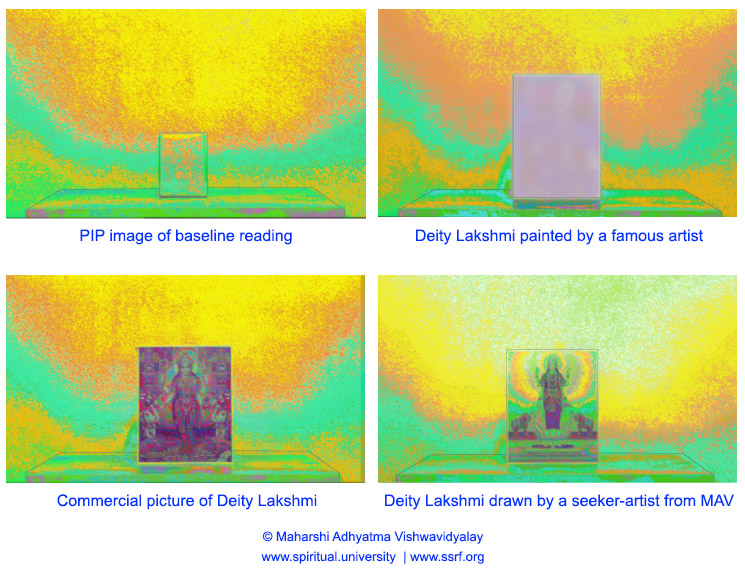 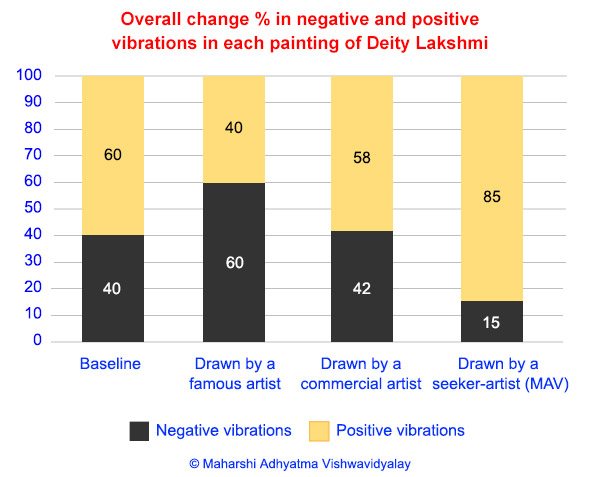 In this experiment, the Universal Thermo Scanner (UTS) was used. The Universal Thermo Scanner (UTS) is an instrument developed by Dr. Mannem Murthy (a former nuclear scientist) and is used to measure the subtle-energy (positive and negative) and the aura around any object (living or non-living). Using this instrument, the same three paintings of Deity Lakshmi were used as in the previous experiment. They were measured for three criteria, i.e. negative aura, positive aura and total combined aura.

The three charts given below show the readings of the aura (in metres) as per each criterion. 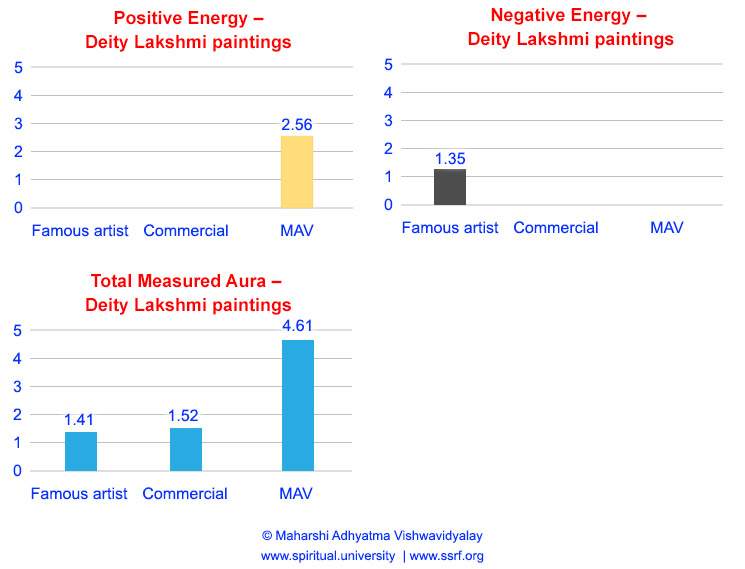 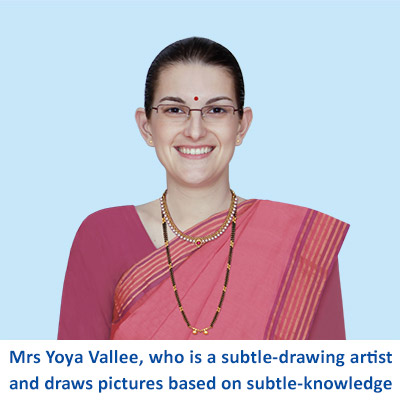 At the Spiritual Research Centre and Ashram (in Goa, India) extensive research into the spiritual dimension is conducted using an advanced level of sixth sense. The subtle-knowledge received by seekers in the spiritual research team goes through rigorous scrutiny.

One medium of receiving Divine knowledge is in a visual format. The seekers who receive knowledge in such a way are known as subtle-drawing artists and they can visually perceive the subtle-process during an experiment or situation and draw what they see and feel.

These drawings are akin to spiritual X-rays and provide the average person with an unparalleled visual view into the spiritual dimension. Two such pictures are displayed below. They represent what Mrs Yoya Vallee (who is a seeker-artist from MAV) perceived in the subtle when observing the two types of pictures (as mentioned above), namely the picture of Deity Lakshmi drawn by the famous artist and the picture drawn by the seeker-artist Janhavi from MAV. 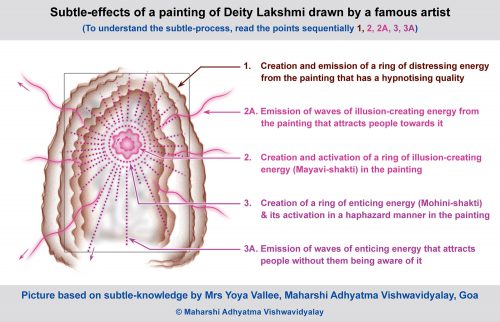 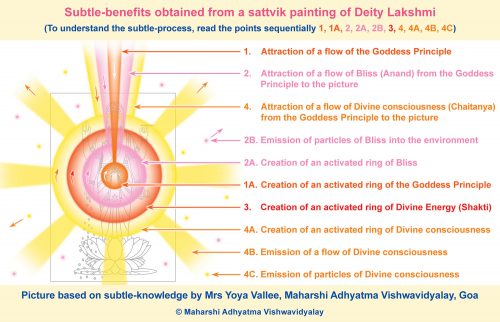 This brings up the question as to why the artist’s work emits negative energy. The following are some explanations that shed light on this subject.

The spiritual state of the artist has a significant impact on the spiritual vibrations their art emits. If an artist is afflicted by negative energies, artwork made by that artist will have more negative vibrations. The colour of the entire picture is black, which is a spiritually negative colour. The biggest flaw in the famous artist’s approach to art was attempting to draw a deity’s picture as per his imagination and wish, rather than under the guidance of a spiritually evolved guide. If he were to have listened to a spiritually evolved guide, then he would have drawn the deity as per the spiritual science of art.

Often famous artists give their own aesthetic touch to pictures of deities. As per the principles of spiritual art, the form in the artwork representing a deity should exactly match the form of the deity. Hence most famous artists violate this fundamental principle of art when painting a deity.

When it comes to art, the artist’s name often dictates the popularity of his works. It also goes a long way in attracting crowds to view his artwork. As a result, art lovers blindly go to great lengths to purchase works of art made by famous artists without understanding the spiritual vibrations that the art emits. For example, purchasing a work of the famous artist can cost hundreds of thousands of dollars. However, when one purchases a work of art and hangs it on a wall at home, one would want it to emit positivity. Yet, research has shown that very often expensive paintings that are highly sought after, emit negative vibrations.

Clearly, the fame of an artist is not a relevant criterion in determining the spiritual purity of a work of art. The best way to understand this is by starting or increasing one’s own spiritual practice because then one develops one’s sixth sense. This enables them to feel spiritual positivity and negativity through their own sixth sense, so one would naturally understand which works of art are spiritually positive and which ones are negative. 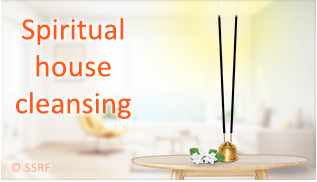