1. Introduction to types of ghosts

At the outset, it is important to note that while we use the phrase ghosts (demons, devils, negative energies, etc.) as a collective noun to cover the entire gamut of negative energies, there is a vast difference between the lower order ghosts and higher order ghosts such as subtle-sorcerers (māntriks) from the sixth and seventh region of Hell (Pātāl). This difference is in terms of their spiritual strength. It is like comparing the military might of the United States of America to a small country in the Pacific Ocean. Though they both have the status of being sovereign nations, they are simply not in the same league in terms of military might.

As you can see from the above chart, the spiritual strength of subtle-sorcerers is the maximum amongst all types of negative energies. They have access to enormous amounts of spiritual black energy. They can access it to cause damage over large areas and severely affect humanity at large. Subtle-sorcerers from the 6th and 7th Region of Hell have the spiritual capability to wage a subtle-war even against lower level Deities from the subtle region of Heaven (Swarga).

1.1 What about all the familiar names of ghosts?

For those of you who have been exposed to literature about ghosts, you may be wondering what happened to the familiar names you have read about such as Satan, Devil, Poltergeist, Phantom etc. These are but various names of ghosts that fit into the framework of generic types of ghosts or demons that we have given above.

2. Is there any hierarchy in ghosts?

Yes there is a hierarchy among ghosts which is based on their spiritual power or strength. Ultimately all ghosts are controlled by subtle-sorcerers.

3. How does a ghost become a particular type of ghost or type of a demon?

4. Basic shape and form of types of ghosts

In the various articles where we have provided detailed information on the various types of ghosts and demons, drawings based on subtle-knowledge of their generic form have been provided. Please note that this is just a rough guideline as ghosts can take up any form.

The spiritual principle that word, touch, form, taste, smell and its associated energy coexist is also true with ghosts. Depending on their type of energy, they take up generic forms. These forms can however change, depending on what the ghost is trying to achieve. For example, if the ghost is trying to intimidate, it will take up an intimidating form, whereas if it is trying to fool a spiritual healer it may take a form of an angel or a positive energy. They can also take the form of our departed ancestors thus misleading psychics and the people who come to psychics to enquire about departed relatives. This is true in almost all cases.

5. SSRF research on types of ghosts

The Spiritual Science Research Foundation (SSRF) has been studying various types of ghosts (demons) and their manifestations since the year 2000. At that time due to the intense spiritual practice of seekers in the SSRF hermitages (Ashrams) across India and the mission of the organisation to spread Spirituality in order to herald in the era of spiritual renewal after 2025, we found that seekers of SSRF began to be increasingly targeted by ghosts. Initially the lower order ghosts began to attack the SSRF hermitages and seekers. SSRF seekers fought this onslaught of subtle-attacks by increasing their spiritual level, spiritual healing remedies and most importantly the grace of their spiritual guide His Holiness Dr. Athavale. However as the years progressed, various types of demons and type of ghosts of increasing spiritual strength attacked seekers in an attempt to stop the spiritual research that was taking place in the SSRF hermitages. 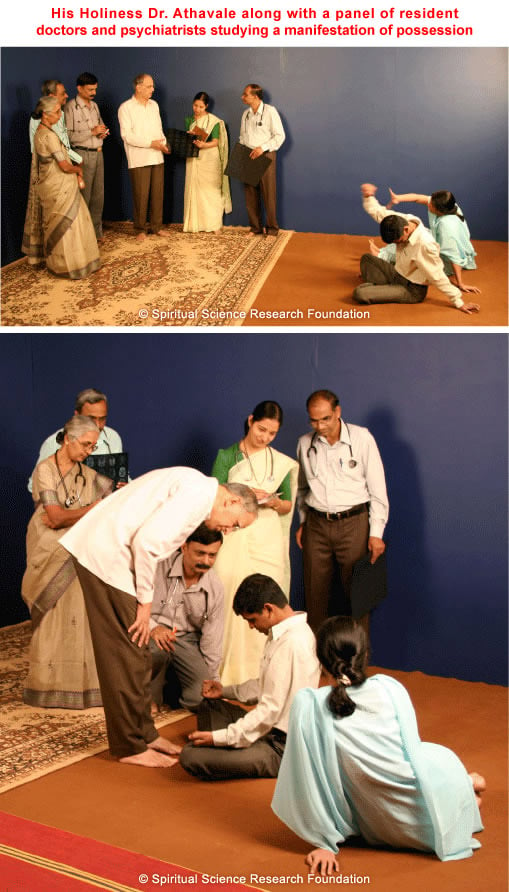 During the period from 2000 to date, SSRF has had the opportunity to witness and research thousands of subtle-attacks and possession by various types of ghosts. In this section, we explain the various genres of ghosts and their characteristics.

We are happy to share with you that we have a new upgraded design and website functionalities. We made this effort to make the website more user friendly for you. We hope you enjoy the new english website. In the coming weeks we will also upgrade the websites in other languages.

If you have any feedback for us for the new website please feel free to share with us in our livechat facility.