For many women, there is nothing more heartbreaking than to learn that they are infertile or unable to carry a child to term. The inability to conceive or infertility in women can be a deep and lasting wound that is also, unfortunately, all too common. Nowadays, as many as 8 to 12 percent of couples suffer from infertility worldwide (Kumar & Singh, 2015). The ordeal of a couple struggling to conceive is further aggravated by the stress of treatments for infertility, which can be both agonizing and deeply depressing.

What makes things worse for many couples is the fact that infertility is unexplained in about one-quarter of cases (Somigliana, et al., 2016). In diagnosing problems related to pregnancy and conception, modern science generally focuses on the genetic, biological and psychological factors. However, are we missing a key piece of the puzzle, that is the influence of the subtle dimension on our ability to conceive and deliver a healthy child ?

In this testimony, Cristina shares her personal journey of how she overcame her long-standing inability to conceive as well as the multiple gynaecological issues she faced by addressing the spiritual root cause. 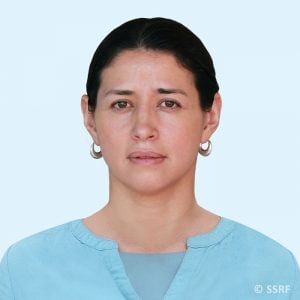 My name is Cristina Santa Cruz. I live in Bolivia and I am a biologist by profession. Before getting into how I was able to overcome my inability to have children, I would like to share with you some background about my formative years, and how my early inclination towards Spirituality helped me to overcome the spiritual root causes of my problems.

3. Childhood and my inspiration for spiritual practice 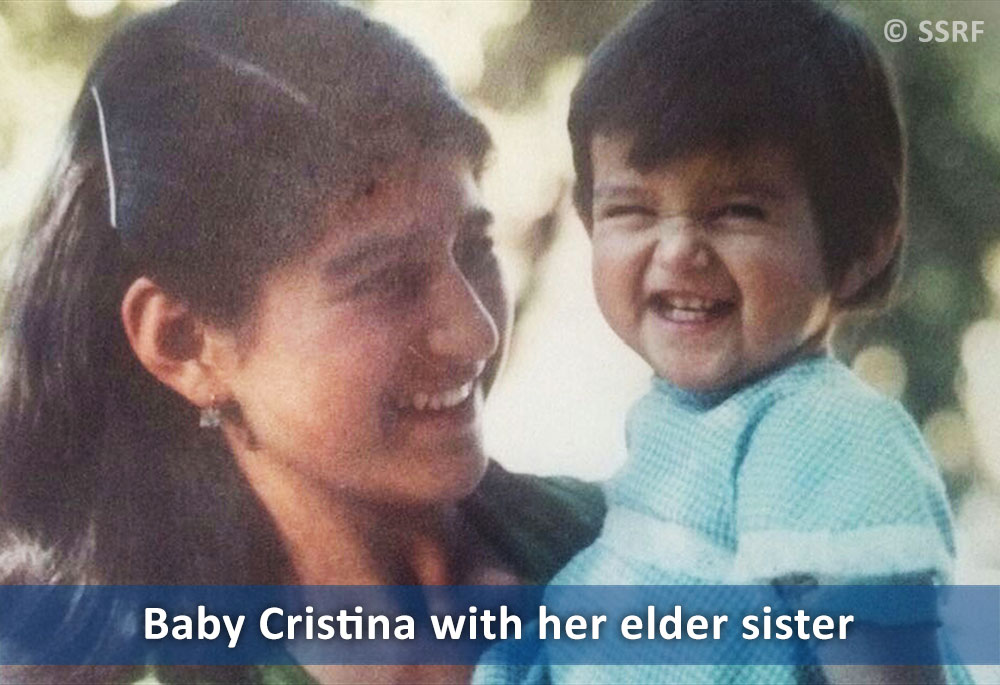 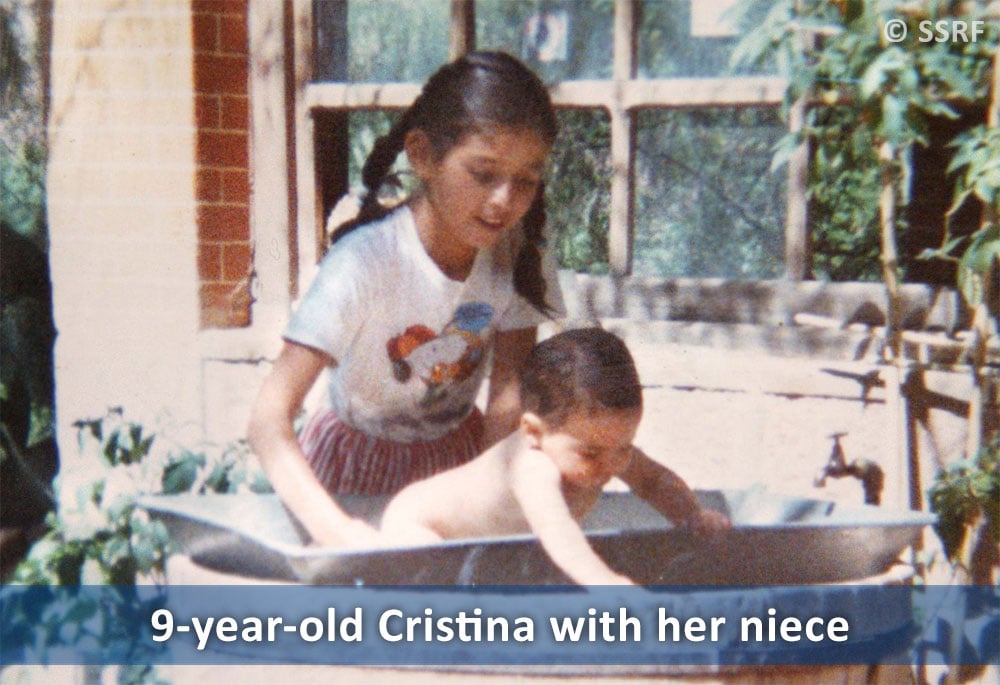 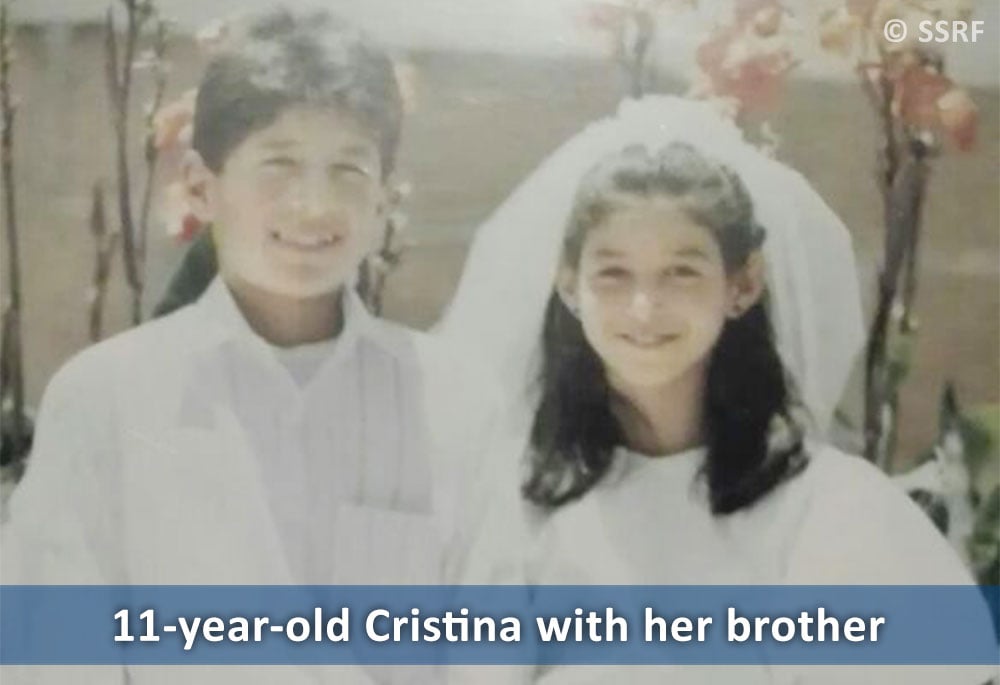 I was the youngest daughter in a family of 8. My mother had an interest in Spirituality, and I believe that she was able to perceive far more than others around her through her sixth sense. I recall my mother always talking about the existence of non-physical beings such as gnomes and angels. In addition to this, my mother lived through a unique near-death experience during which she was able to perceive her body being revived. Also, there used to be many books on metaphysics at the house, and somehow this, and my mother’s experiences, inspired me to look for something beyond religion.

4. My inability to conceive – background

Like most women, I had a strong desire to have children. However, this proved very challenging for me, given that I had a number of longstanding gynaecological issues. I had an irregular menstrual cycle and suffered from polycystic ovary syndrome (PCOS), a hormonal disorder that can cause infertility, miscarriage or premature birth. The exact cause of PCOS is unknown (Mayo Clinic, 2017)

I was also diagnosed with cervical insufficiency (incompetent cervix), a condition whereby for unexplained reasons, the cervix opens (dilates) long before the baby is due. This medical condition is considered to be the cause of 15-20% of pregnancy loss, as well as premature labour (Yates, 2010).

The only two pregnancies that I was able to have at all were very complex. I had to take medications in order for the eggs in my ovaries to mature and for conception to be possible. Once pregnant, I felt very tired. I could not digest food and experienced constant nausea and vomiting, heartburn, colds, urinary tract infections, vaginal infections, and I finally required full bedrest. The pregnancies also both ended in miscarriages due to my cervical insufficiency.

Doctors finally told me that due to my cervical incompetence, it would be very difficult for me to have children. I was devastated, as I really wanted to be a mother. I felt, however, that the situation was hopeless.

5. A phenomenon begins to unfold as I begin spiritual practice

I began my spiritual journey at the end of 2012, after noticing my co-worker using some alternative healing products that I had never seen before. I was curious and asked my colleague about the products. My colleague then shared some SSRF incense sticks with me, as well as an article about how I could start my spiritual journey.

My co-worker also taught me about the spiritual practice of chanting the Name of God. Although chanting was new to me, I somehow had an immediate interest and desire to try it. As I began chanting, I had more questions about Spirituality and began to attend spiritual meetings (satsangs) in my community organised by SSRF.

Over the next few months, as my knowledge and awareness of spiritual practice grew, I began to chant the Universal Chant, as well as the Shri Gurudev Datta chant for overcoming ancestral problems. I also began to practice Personality Defect Removal (PDR) as well as various spiritual self-healing remedies recommended by SSRF such as nyas and the Salt Water Remedy.

Somehow, after beginning spiritual practice, the hope of conceiving a child returned to me. I gained the inner strength and motivation to seek out the best medical advice and visited the leading medical centre in my city for assisted reproduction. Incredibly, the doctors now diagnosed my chances of conceiving a child to be quite good. The conception indeed happened smoothly and almost unexpectedly. My doctor even authorised me to travel during the first three months of my pregnancy.

Throughout my travels, I was able to do much more chanting than I had ever done up to that point. I also noticed drastic changes in my husband. He said that he wanted to improve his personality and even decided to quit smoking. Upon returning from my trip, I had a precautionary medical procedure known as cerclage (stitching of the cervix) to prevent a premature delivery. Following the procedure, I was advised to maintain partial bedrest and limit my physical activity.

6. My infertility problems return and intensify

From week 20 of my pregnancy, I started to have strong hip pains that doctors believed were due to a nerve that could have been affected by my pregnancy. From that point onwards, my health began to decline, and I began, once more, to face the very real danger of a miscarriage. I started to lose worrying amounts of amniotic fluid (a fluid in the uterus that is vital for healthy fetal development). I was also diagnosed with a serious and life-threatening condition known as placental abruption. (Placental abruption is defined as the complete or partial separation of a normally located placenta from its uterine site before the delivery of the fetus. When the abruption is severe, as it was in my case, it can result in fetal demise. (Han, Schatz, & Lockwood, 2011)

Due to my combined health issues, by week 25, the doctors artificially hastened the growth of the lungs of the fetus. By week 26, I was given an emergency caesarean section due to the almost total placental abruption and the almost total lack of amniotic fluid remaining in my uterus. As such, my baby was born but she was in a very critical state. 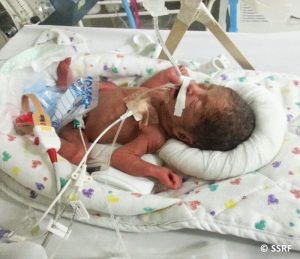 Throughout all of this immense fear and despair, when my baby’s life was clearly at risk, I gained strength and stability from my spiritual practice. I followed the guidance of Sadguru Cyriaque Vallee, an SSRF Saint, to do the Salt Water Remedy, nyas and the Shree Gurudev Datta chant (a Sadguru is a Saint between the 80-89% spiritual levels). I did the Salt Water Remedy every night and made PDR efforts that helped me cope with my psychological stresses and fears. I was also supported through this difficult time by my guiding seekers from SSRF.

7. The birth of a miracle 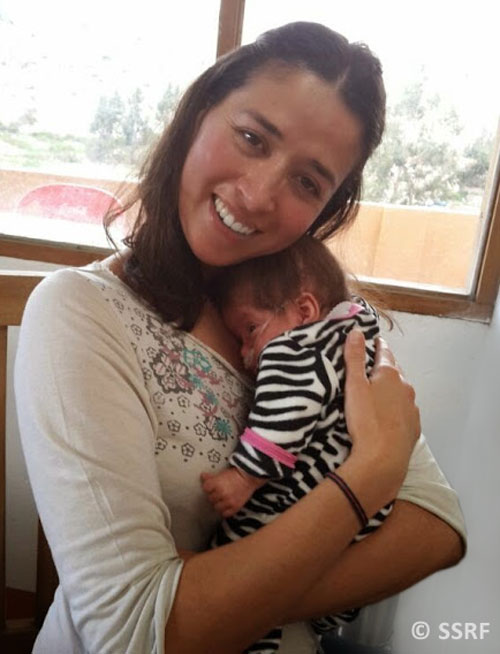 By God’s grace, and despite all odds, my daughter Florence was born weighing barely 720 g. She spent approximately 3 weeks in neonatal intensive care. These first three weeks of Florence’s life were the most precarious, as Florence was on artificial ventilation. She was at high risk of hypoxia (dangerously low levels of blood oxygen) and needed to be resuscitated more than once. It was my faith in God alone that helped me through this extremely difficult period.

Florence was later transferred to an incubator until she reached 2 kg in weight and it was safe enough for her to leave the hospital. During this time, I would leave a picture of Deity Shrikrushna in her incubator and chant for her. Even after Florence’s release from the hospital, due to her prematurity, I needed to support her breathing with additional oxygen for approximately five months. There was also a risk that she might stop breathing altogether, so I would use an apnea monitor to track her breathing while she was sleeping.

Florence had very poor muscle tone and ligament laxity, which is common for premature infants. As a result, she had difficulties crawling and walking and has some difficulties in writing to this day. To address this, I have been taking her to physiotherapists and psychomotor specialists since infancy. Florence’s condition is improving day by day. Though she continues to suffer from congested lungs and low blood oxygen, her bouts of cold and pneumonia are becoming less and less frequent. I also have not observed any psychological problems in Florence, despite the trauma surrounding her birth. She always speaks openly and, despite her tender age, introspects and analyses life situations well.

Florence has an innate curiosity about God and asks questions such as why God is within us and how can I come closer to Him. Florence does, however, have nightmares and respiratory allergies, which I feel may be due to ancestral problems.

In my case, I continue to have ovarian cysts and hormonal imbalance, but I have been assured by my gynaecologist that there is nothing to worry about. 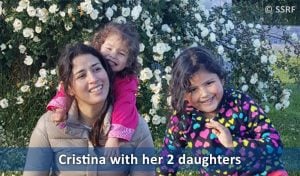 Looking back on the events surrounding Florence’s birth, I truly believe that she is only in this world thanks to my spiritual practice.

Though I was relatively new to spiritual practice at the time of my pregnancy, I made sincere efforts to chant and apply self-healing remedies. As a result, Florence survived. Her birth and her subsequent recovery were considered by doctors to be nothing short of miraculous.

9. The spiritual science explained : What were the root causes of the infertility faced by Cristina ?

As per spiritual research, spiritual factors (ancestral and negative energy problems) account for 50% of the reasons why men and women are unable to conceive. A possible sign of infertility being a spiritual problem is if a doctor diagnoses a patient with an ‘unexplained fertility problem’ or if he or she cannot pinpoint the cause of one’s trouble conceiving.

Departed ancestors, especially those with some spiritual power or with the help of powerful ghosts such as subtle sorcerers (mantriks) can target the mother and fetus in the womb itself, in order to :

10. Measures to overcome problems related to infertility in women

Problems with a spiritual root cause can only be overcome through spiritual means. Hence, parents can reduce, or completely eliminate problems related to pregnancy and conception by practising Spirituality. Given ahead are some spiritual measures which can be adhered to by parents :

We hope this article helps prospective parents to learn how to apply spiritual measures before conceiving, during pregnancy and childbirth so that the child born is healthy and spiritually protected.