Spiritual Research on the Life and Predictions of Nostradamus

The spiritual research was done through the activated and highly advanced sixth sense of Anjali Gadgil, a seeker of SSRF. Her spiritual analysis was checked and reconfirmed by His Holiness Dr. Athavale.

1. Introduction to the life and predictions of Nostradamus 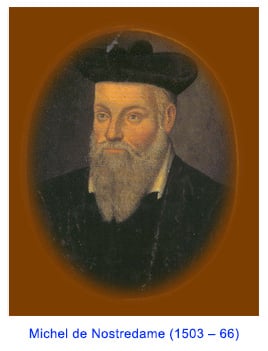 Michel de Nostredame (1503 – 66), popularly known as Nostradamus, was one of the world’s most famous seers. His predictions spanned 500 years into our current times and have captivated the whole world. The Spiritual Science Research Foundation (SSRF) recently conducted spiritual research on the spiritual life of Nostradamus that contributed to his extraordinary gift. The contents of this article have been obtained through the medium of advanced sixth sense (ESP).

In all cases where a person has psychic abilities or is able to look into the future, it is generally a gift due to past-birth spiritual practice. How we use this gift can impact our spiritual journey and the region we go to after death.

2. Spiritual research on the reasons for Nostradamus’ gift of prediction

Before his life on the Earth region (Bhūlok), he had done spiritual practice in the subtle-region of Heaven (Swarga). As a result of this spiritual practice, Nostradamus obtained two types of supernatural powers:

3. Spiritual research on the reason for Nostradamus’ birth and the purpose of his predictions

Nostradamus had to be born on Earth to rid himself of the sway/hold that his supernatural power of predicting the future had over him. His spiritual goal was to obtain guidance about practicing Spirituality so as to continue his afterlife spiritual journey into the further positive regions.

4. Spiritual research on the life and predictions of Nostradamus from a spiritual perspective

Over the years, Nostradamus became over ambitious and invested a lot of time in his gift of seeing the future. He would receive prior intimation of many events through his divine supernatural powers. As he would disclose what he saw, people would come to know of future perils and take measures to protect themselves against them. This infuriated the ghosts as their plans to create problems for people would be foiled. Consequently subtle-sorcerers (māntriks) from the fourth region of Hell (Pātāl) started attacking his brain through the medium of black energy threads. These subtle-sorcerers had the capacity of creating illusory visions.

Due to the attacks by ghosts, his brain was affected and obstacles were created in stimuli reaching his brain. Consequently his behaviour started becoming strange and eccentric.

As a result, in his later years, he suffered from bouts of depression. He also did not have access to a Guru which meant he had no one to turn to at a spiritual level. He therefore also did not have the spiritual strength of a Guru or personal spiritual guidance to protect him. Spiritual research indicates that his personal life was steeped in internal sorrow that the people around him may not have been aware of.

In the beginning, by virtue of his supernatural power of vision, Nostradamus would receive predictions through visions and scenes. Over time he got carried away with his fame and the accolades of people.
This defect in his personality weakened him spiritually. The subtle-sorcerers took advantage of this spiritual weakness. Illusion creating subtle-sorcerers started intercepting some of his visions with their own illusory visions. They attacked Nostradamus with black energy interspersed in the illusory visions that they provided him with. This is a common method that ghosts use to attack clairvoyants. As a result of this, his eyes started appearing sharp and aggressive and the influence of the black energy of subtle-sorcerers started becoming apparent.

Due to this subtle-influence of ghosts and his own desire for fame, the subtle-atmosphere around him had a subtle foul smell. Instead of feeling positive in his company, people began to feel distressed. Many of the sāttvik people that were his friends and colleagues, started distancing themselves from him. This was exactly what the subtle-sorcerers wanted to happen.

Nostradamus used his wilful action (free will) to get further entrenched in his fascination for supernatural powers and fame. As a result, he deprived himself of further spiritual practice on Earth. The effect of ghosts (demons, devils, negative energies, etc.) only made matters worse. Slowly the stores of his spiritual practice from his previous lifetimes were depleted. Hence at the time of his death, Nostradamus’ subtle-body got trapped by the very same subtle-sorcerers and had to dwell in the Nether region (Bhuvarlok). In short, instead of using his time on Earth to do spiritual practice and attain a higher positive region, he regressed from the subtle-region of Heaven to the subtle-region of the Nether world after his life on Earth.

5. Cautionary points we can learn from the life and predictions of Nostradamus

Our spiritual journey can be a slippery slope fraught with the perils of our own personality defects. Though Nostradamus was graced with the supernatural power of prediction, he did not use it to augment his spiritual growth. Just predicting the future by itself does not constitute spiritual practice. If his primary focus were to be his spiritual practice, then his future would definitely have been different.

Having supernatural powers is not enough; one has to persevere with spiritual practice and reduce one’s ego and dissolve one’s mind and intellect. By dissolving one’s mind and intellect, we mean going beyond our superficial worldly feelings and thoughts, thereby gaining access to the higher divine Universal Mind and Intellect. Our mind and intellect is relative to our experiences and conditioning and it cannot see beyond the barrier of time into either the past or future. The Universal Mind and Intellect being divine, functions through the Absolute knowledge of the entire past and future and is not limited by the conditioning of individual experience. It frees us from the clutches of individual will and enables us to understand God’s will. As a result one is able to tap into the Soul (the God within each one of us) and experience the ultimate in Spirituality which is merging into God.

For example, some of the seekers from SSRF who have an advanced sixth sense of vision use it to create drawings based on subtle-knowledge to educate society about the spiritual realm. They do this as part of their spiritual practice under the guidance of H.H. Dr. Athavale. Under no circumstances do they use their gift for profit and fame. They are constantly vigilant about becoming proud of their gift and a resultant rise in their ego.