Note: To understand the background behind this case study and why these phenomena have been taking place especially with regard to SSRF, please read – An introduction to Horrifying Supernatural Phenomena. 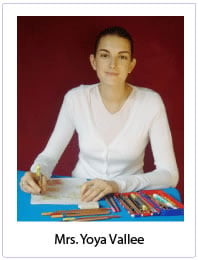 This case study describes the appearance of blood-like stains on the nightshirt of Mrs. Yoya Vallee, a seeker of SSRF’s subtle-department. Yoya has been doing spiritual practice with SSRF for over 10 years, and at the time of the attack she was staying at the SSRF research centre in Goa. This attack occurred the very morning after she decided to stay longer at the centre to conduct spiritual research (through sixth sense) on the phenomenon of bloodstains.

She recounts the incident in her own words:

I woke up on the morning of 23rd January, 2009 with a lot of negative thoughts. I had been staying in SSRF’s research centre for about a month. I kept getting repeated thoughts that I should leave and return home to Paris. Coincidently, I had just decided the night before to stay a few more months so I could do more service in the subtle-department, so I found these negative thoughts quite strange and just the opposite of what I had been thinking about yesterday.

At about this time, I became aware of a pain in my right shoulder-blade area, but I ignored it and went to take a shower.

When I took off my t-shirt, I saw numerous red blood-like stains on the back side of it. (There were 8 stains to be precise). However when I checked in the mirror there weren’t any scratches or wounds on my back, and I don’t have any medical condition that could cause spontaneous bleeding.

In addition SSRF checked the following:

The forensic testing would take time so in the meantime SSRF asked Yoya to take a blood test to rule out any blood disorders. She was checked by our internal doctors and an external doctor. After looking at the blood report and carrying out a physical check-up, none of the doctors could find anything out of the ordinary that could create the bloodstains.

When the findings of the forensic specialist returned it showed that the stains were not blood but some organic substance. The origin of the stains however could not be ascertained.

Yoya, being from the subtle-department of SSRF, immediately perceived the stains to be an attack by negative energies. She felt it was their reaction to the decision that she had made to conduct spiritual research on blood stains.

Later Yoya drew the entire subtle-attack using her advanced sixth sense of vision.  The following are some of the key highlights from her drawings based on subtle-knowledge and Knowledge received about the attack.