1. Introduction to the phenomena of sinkholes

During the past few years a strange phenomenon has been increasingly observed all over the world. Residents of various places around the world have been taken aback to find sinkholes suddenly come up in their locality – sometimes involving fatalities. A sinkhole is a depression or hole in the ground caused by some form of collapse of the surface layer. The ground caves in all of a sudden, creating large holes in the ground and sometimes devouring whole buildings.

In the slideshow below, we have displayed a few pictures which show some of the various sinkholes that have appeared around the world. 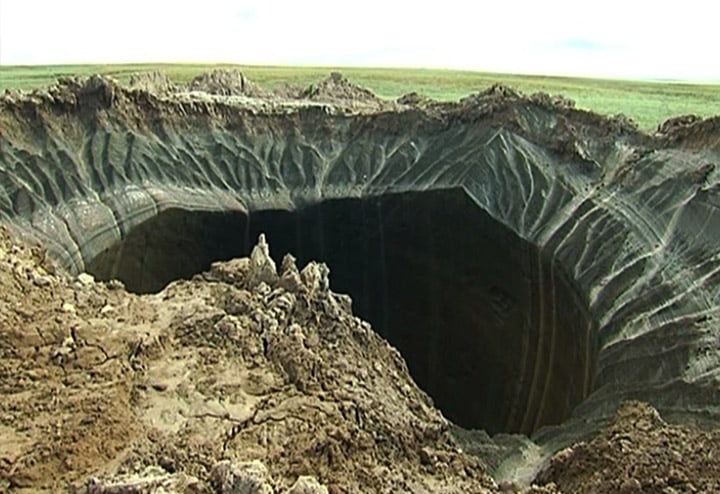 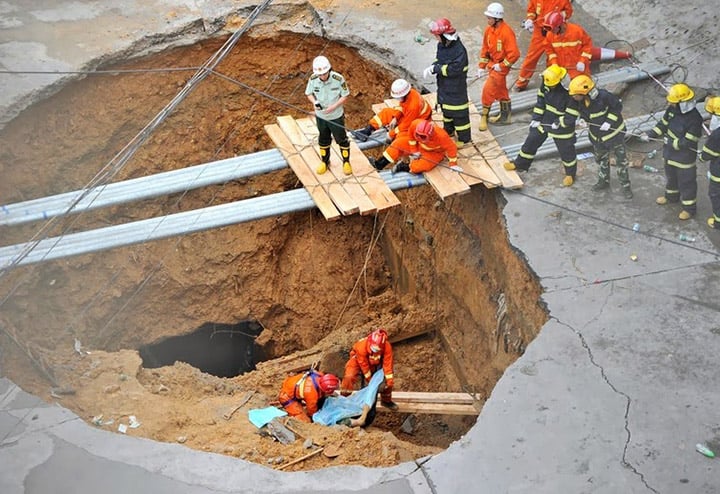 Shengden, Guangzong, China: Not all sinkhole victims escape. Here, rescue workers retrieve a body from a caved-in roadway. Such deaths are rare, but when a sinkhole strikes, there's no way to avoid it. Reported incidents from Beijing, China, Taiwan, Idaho (USA) and Utah (USA) have all involved victims who were near-instantly lost when the ground gave way beneath them. 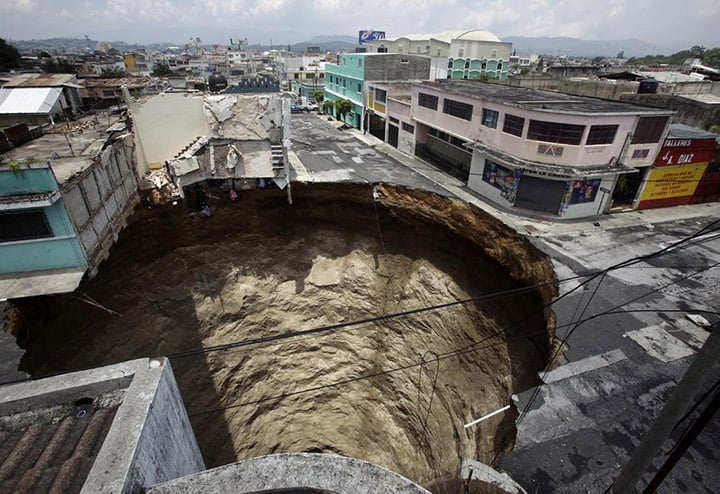 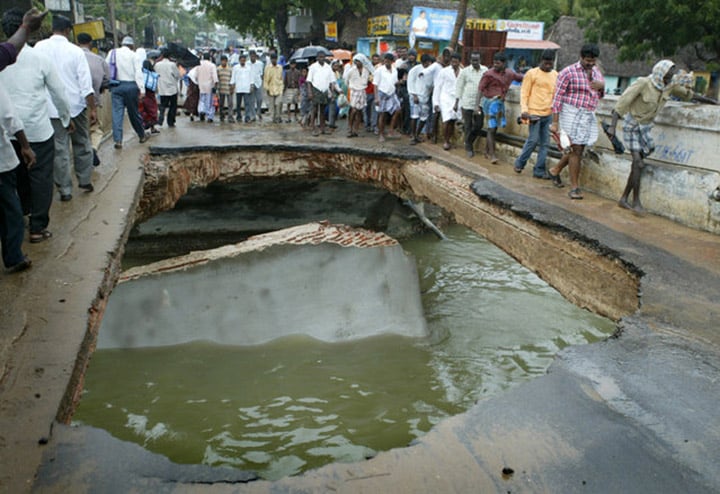 Sinkhole in Nagapattinam, India, 2004: A sinkhole appeared suddenly in the middle of a busy road. 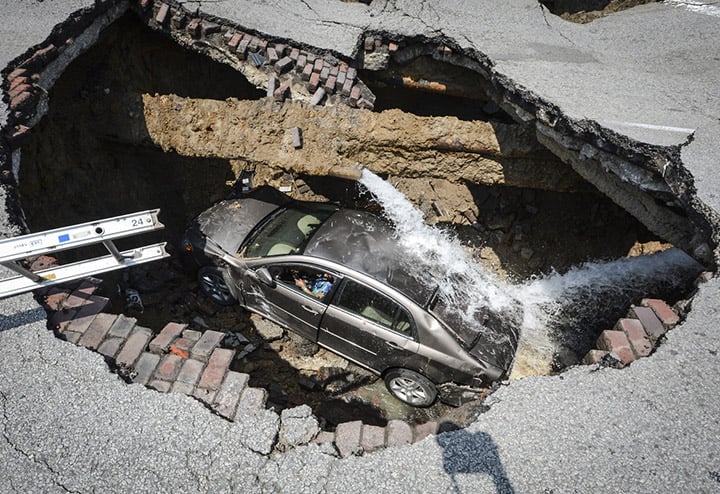 Sinkhole in Toledo, Ohio, July 2013: The driver of this car drove straight into a sinkhole that opened up right in front of her eyes. She was able to climb up a ladder to the surface, shaken but unharmed.

3. Scientific reasons for the appearance of big holes or craters

Geologists have offered various theories for the natural causes of sinkholes such as the type of soil / rock giving way to rainwater and underground water. Other natural causes submitted by experts include meteorite strikes, heavy rainfall, global warming, underground gas explosions, etc. Sinkholes can also be exacerbated by artificial means such as mining activity. They can also occur from the over-pumping and extraction of groundwater and subsurface fluids. Sometimes scientists are still searching for answers. For example, there is still speculation about what caused the spectacular sinkhole in the Yamal Peninsula in northern Russia.

Through spiritual research we found that these physical reasons are just one part of the reasons why sinkholes appear.

4. Spiritual research into the cause of sinkholes

In our article World War 3 Predictions, we have explained that the Universe is in the midst of a huge subtle-battle. Most of this battle is fought at a subtle, unseen level. However, a fraction of the subtle-battle is manifesting on the Earth plane and humanity is and will be severely affected. It will result in many worldwide problems, which include wars and severe natural disasters, etc.

Spiritual research conducted by SSRF with regard to the creation of sinkholes revealed that the primary cause is spiritual in nature and that subtle-sorcerers are behind such occurrences around the world. These holes are formed by subtle-sorcerers to store negative black energy. Negative energies then use these storehouses of negative black energy to spiritually pollute the environment by continually spreading Raja-Tama vibrations which are spiritually negative in nature. For example, the sinkhole in the Yamal Peninsula in Siberia has the ability to spread negative energy up to distances of 500-1000 km. Smaller sinkholes would have a lesser range.

4.1 How do subtle-sorcerers cause sinkholes?

1. The physical element has been already been explained amply by geologists and has been described briefly above in section 4.

3. Spiritual factors: 70% of the reasons such sinkholes appear is because of the resolve of higher level subtle-sorcerers. Sorcerers capitalise on both the physical and psychological factors prevalent in a place to create such sinkholes, which become storehouses of negative energy to be used towards World War 3 and Armageddon. The very space where the hole appears needs to be at least 5% more negative than the average to enable the hole to appear. The proportion of physical and psychological versus spiritual will differ from sinkhole to sinkhole. In some cases it can be 10% physical / psychological and 90% spiritual. On an average though it is 30% and 70%.

4. The range of its capacity to affect the environment is also given on average. A sinkhole can exert an influence of 1000 km if it is very large.

Subtle-sorcerers through their supernatural powers (siddhis) use the 5 Absolute Cosmic Principles (Panchatattva) to achieve destruction on the Earth plane.

4.2 What about sinkholes that look beautiful?

Not all sinkholes look destructive like ones described above. Some sinkholes around the world are sought after tourist-attractions where visitors come to swim or dive. Examples of these sinkholes are: 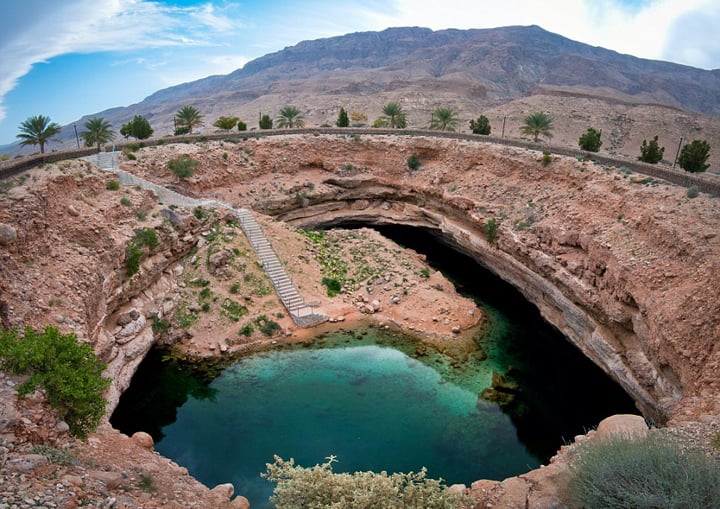 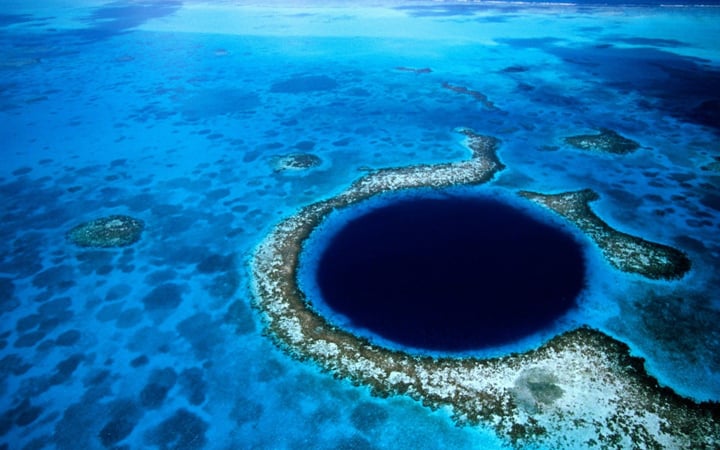 Both these sinkholes however are example of sinkholes created with illusory negative energy of subtle-sorcerers. Their picture perfect well rounded shapes camouflages the spiritual negativity within such sinkholes. People who swim in these water will be affected by the negative energy contained in it.

You can test your sixth sense by conducting a subtle experiment on these sinkholes.

Two SSRF seekers visited a sinkhole that appears externally beautiful. Their experiences are below:

While we were in Cancun, Mexico, we visited the Ik Kil sinkhole. When we arrived in the area of the sinkhole I felt my distress begin to increase as my thoughts became more extrovert. There was a set of stairs that led down to the sinkhole. As we descended, a feeling of heaviness surrounded my head and I found it difficult to think. My husband would ask me some questions and I would have difficulty in organizing my thoughts to respond to him. My chanting stopped and when I tried to restart my chanting it was very difficult. The pressure around my head was becoming increasingly hard to bear.

On the exterior the sinkhole looked very nice, and many people were jumping in the water to swim in it. However, it was one of the places where I have felt the highest distress. I felt more distress at the sinkhole than I have while walking through a cemetery.

Even while starting to write my experience of visiting a sinkhole I had difficulty clarifying my thoughts to express myself. This entire experience has shown me firsthand how negative and harmful sinkholes are on a subtle level.
– Mrs Radha Mallick, Vancouver, Canada

My wife and I were visiting Cancun, Mexico for a vacation and at one time we visited the Ik Kil sinkhole as a part of a tour package. The sinkhole is described as beautiful and it is a popular tourist destination. Since it has a pool at the bottom, many tourists choose to swim in it daily.

When I first heard we would visit a sinkhole I thought that the distress would probably not be very bad. I felt that I must have been exposed to worse distress in other situations so things would be fine. However, as we were approaching the sinkhole, I noticed that the pressure in the environment was increasing. Later, I realized that my thoughts became more extroverted during this time though I was not initially aware of it. As we entered the sinkhole, I felt the pressure increase significantly and I felt that a subtle black covering had formed on my intellect that made it hard to think clearly and to chant.

My wife was also visibly affected and she seemed to find it difficult to respond to questions I asked her.
Though the sinkhole looked beautiful externally and many people were bathing in it, the entire area gave off a lot of negative vibrations. I was amazed that something that looked harmless in gross could be so dangerous in subtle and I could not imagine how distressing it would be to actually swim in the sinkhole.

The experience has taught me how subtly harmful sinkholes can be. I was not expecting the sinkhole to be so distressing and the level of distress surprised me. On a positive note, this was a nice way to learn how valuable the Spiritual Knowledge that is available on SSRF about distressing phenomena such as sinkholes is.
– Mr Auritro Mallick, Houston, USA

Another intriguing fact about these large holes or craters is their appearance in the wilderness or in very remote and sparsely populated areas. From the outside it appears that, in a way, it is good that these appear in remote areas to avoid causing damage to life and property. In reality, the opposite is true. When one investigates this through spiritual research, then the sinister motive of subtle-sorcerers to cause much greater damage at a subtle-level can be understood. Creating holes in remote areas has an added advantage: no one takes much notice of them. So, it becomes even easier for the negative energies to keep amassing negative energy in them until these centres become very strong. For instance, the subtle-sorcerers have purposefully chosen a remote place (such as Siberia) to make the large holes or craters, because it is inaccessible to most people.

Mrs Yoya Vallee, an SSRF seeker commenting on spiritual phenomena of sinkholes added, “Nowadays most people have forgotten God due to their ego and getting absorbed in The Great Illusion (Māyā). Thus, the population on Earth is predominantly Raja-Tama.

This has enabled the distressing energy transmitted by the negative energies from the Region of Hell to get accumulated under the ground. This distressing energy present below the ground is now being released into the atmosphere through the medium of these large gaping sinkholes. These sinkholes are one of the reasons why the proportion of the Raja-Tama on the Earth and in the atmosphere has increased and has become dangerously high.”

5. What can we do to avoid such phenomena from occurring?

One of the ways to counteract spiritual impurity is to adopt a spiritually purer lifestyle. As more people adopt a sāttvik lifestyle, the Raja-Tama component will reduce due to an overall increase in the Sattva component. This rise in purity reduces the chances of attacks by subtle-sorcerers or negative energies. However, the only permanent cure is doing consistent spiritual practice as per the six basic principles of spiritual practice.

Global Issues from a Spiritual Perspective