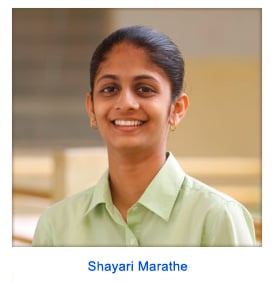 A key spiritual research effort at SSRF is about investigating various types of spiritual healing methodologies. One such healing method we have seen is the application of a Saint’s picture to an area that is experiencing a problem due to spiritual reasons. There is a spiritual rule that states ‘The word, touch, form, taste, smell and its related energy coexist’. This means if we have a picture (i.e. the form) of a Saint, then the energy of the Saint also co-exists within the picture. The higher the spiritual level of the Saint, the more potent His picture becomes as a spiritual healing tool. In this case study we describe a healing process using a Saint’s picture that occurred on a seeker, Ms. Shayari Marathe. Shayari is a student who lives at SSRF research centre along with her parents who are full-time seekers and have dedicated their lives to Spirituality. She recounts her experience in her own words.

“This incident happened in April 2008. I had my maths paper the following day and that afternoon at around half past three I was engrossed in solving the example test papers. All of a sudden I began to feel heaviness in my eyes and I asked my mother who was nearby if she could see anything unusual with my eyes. She told me that my eyes looked quite puffy. There was no itching and I cannot recall anything that could have caused such a swelling.”

SSRF checked with Shayari if she had done anything out of the ordinary such as eating something she may have been allergic to, or whether an insect had bitten her. She answered both questions in the negative. The cause of this seeming allergic reaction was still unknown. 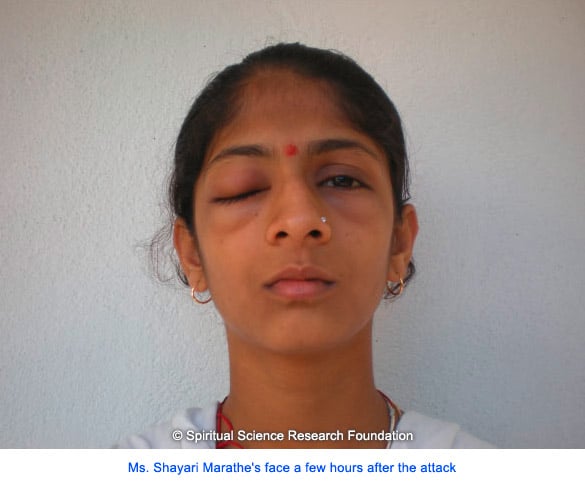 “Within 10 minutes after first noticing it, my eyes puffed up so much that I could hardly see at all. With my exams the next day and as I had a history of being affected by negative energies, my parents told me to show it to the subtle department of SSRF. A Saint entered the room at that time and was surprised to see my condition. After looking at me for about a minute He said that it was purely due to negative energies (i.e. a spiritual cause) and that there was no physical cause to the swelling. As a remedy He suggested that I place a total of 3 pictures of H.H. Bhaktaraj Maharaj on my face. One of each picture was to be placed on both my temples and one on my forehead at my Brow chakra (Adnya-chakra). He also mentioned that the picture should be facing outwards.” 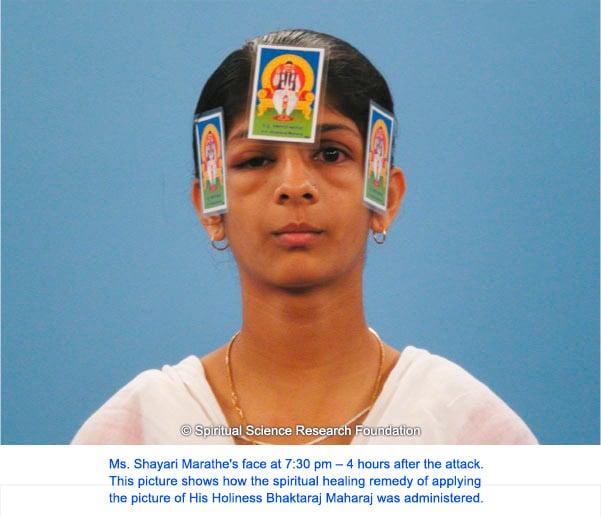 Refer to the drawing based on subtle-knowledge of H.H. Bhaktaraj Maharaj which shows the spiritual vibrations emanating from Him.

Subtle analysis of the attack 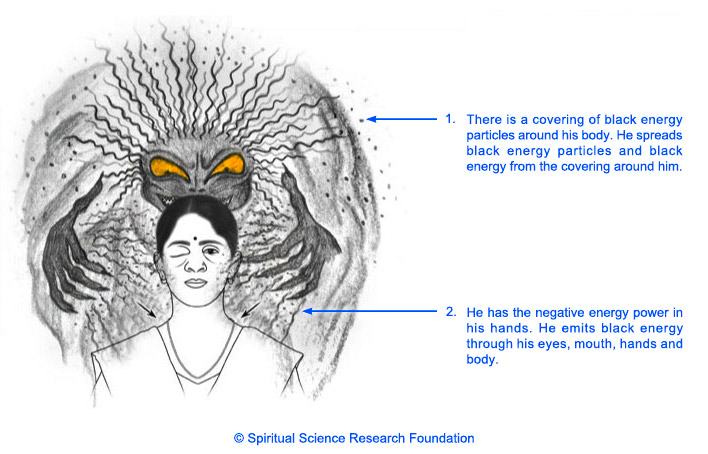 Knowledge about the key features of the attack gleaned through spiritual research is as follows:

Click here to view the SSRF classroom tutorial on: Who is a Saint?