Quite often our readers ask the meaning behind seeing dead relatives in their dreams frequently. A few of them, welcome seeing dead relatives and a few are fearful of the same. Their questions include, ‘Has my father moved on in the afterlife?’, ‘Has he gone to heaven?’, ‘What are they trying to tell me?’, etc. In this article, through spiritual research, we shed some light on this issue from both a psychological and spiritual viewpoint.

Please read what is spiritual research?

2. What is the meaning behind dreaming of dead family members in dreams?

Psychological reasons can include a feeling of guilt or regret for not having spent time with a loved one before he/she died or some anxiety about that departed family member. Here the images of dead relatives that appear in the dream are eruptions from our sub-conscious mind.

Spiritual reasons are mainly two-fold. One meaning is that after death, the subtle-body of the dead family member needs help and is trying to contact its descendant on the Earth region (Bhūlok) of existence. The other reason is trying to seek revenge, to get even with some relative. 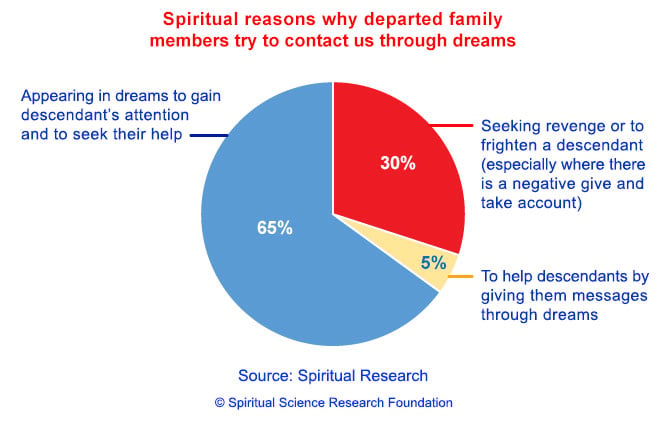 Through spiritual research, we have found (with regard to the spiritual reasons) that approximately 65% of the time, it is the ancestor’s need for help in the afterlife and 30% of the time, it is to seek revenge or to trouble the descendant on the Earth plane of existence. In approximately 5% of cases the meaning of such dreams of dead relatives can be attributed to the dead relatives wanting to help their descendants by giving them messages through their dreams. Refer to the article: It is said that sometimes our ancestors help us, is it correct?

A dream can be considered spiritual in nature if the same dream recurs at least 3 times. Dead family members will generally try to contact the family member (or appear in their dreams) who they feel is most likely do something for them. The reasons subtle-bodies, in the afterlife, find it easier to communicate through dreams as opposed to the waking state is because during the waking state the person who they are trying to contact, is more engrossed in the five senses and does not have concentration of the mind. During the dream or sleep state, the mind is more receptive to messages from the subtle.

We have found that people who have had untimely or violent deaths are more likely to appear in dreams as opposed to people who have had normal deaths such as after a prolonged illness. This is because the person who has died of natural causes is more mentally prepared for death and therefore finds it easier to move-on in the afterlife.

In only 10% of cases there is a negative energy masquerading as the dead relative in the dreams.

3. What is the meaning of a dream of a close friend who had died suddenly?

However, dreams of the departed are not necessarily limited to dead family members. Sometimes even close friends who are deceased appear in one’s dreams. This is mainly to seek help as they may feel closer to the person who they are trying to contact as opposed to their family members on Earth. The following example narrated by one of the members of the SSRF research team will shed more light on this aspect.

Recently a friend of mine, Andrew (not his real name), visited me at the SSRF research centre and narrated how he had been plagued by dreams of a close friend who had died in a tragic accident. Andrew said that once, while at University, he did not go on a trip with his friend because he was competing in an event that his friend had trained him for. During the trip, his friend drowned.

Andrew was overcome by a feeling of remorse and guilt for not being there for his friend and perhaps being able to save his life. He did not have the strength to go to the funeral. Soon after the funeral, Andrew’s deceased friend began to appear in his dreams. It would be the same dream each time and it would recur every few days. This continued for many years. Andrew was very fearful of the dream but he did not ask for help from anyone on this matter.

Then one day after many years, he faced his fears and said to his friend in the dream, “Look I am sorry I was not there for you. I cannot change the past but I cannot keep living like this, dreaming of you every second day. So whatever it is you want from me …. do what you must … kill me if you will, I don’t care.” From the next day onwards he did not have the dream ever again. Andrew felt that standing up to his deceased friend in a dream was the correct thing to do. However, from a spiritual perspective, all that the departed friend wanted, was some spiritual help from his closest friend Andrew. Once he saw that Andrew would never understand, the subtle-body of the deceased friend retreated, never to ask again.

Andrews’s correct action should have been to help organise a ritual to be conducted to help his deceased friend.

4. What can one do, at a spiritual level, to help dead relatives who appear in one’s dreams?

Shourya Mehta, an architect by profession had constant nightmares of her deceased sister in pain for over 10 years. It only stopped after a specific ritual was conducted. 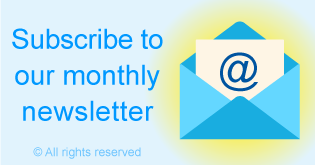