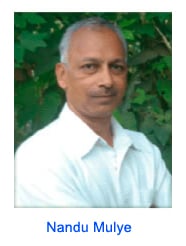 I began smoking the year I started working, that is in 1977. I remember it  being a gradual process of getting addicted to cigarette smoking. In the beginning it was just a few cigarettes during smoking breaks at work. Before I knew it, I was already addicted. In addition to smoking, I developed a liking for alcohol, and occasionally indulged when in the company of friends. While smoking cigarettes became a full fledged addiction, drinking remained limited.

Over the next one and a half decades (1980-97), I battled with giving up the habit innumerable times, but was always unsuccessful. In August 1996, I came into contact with the Spiritual Science Research foundation (SSRF) and started doing spiritual practice of chanting my family deity’s Name. I also chanted the spiritual protection chant of ‘Shrī Gurudev Datta‘.

By December of 1996, I mentally started to feel very uncomfortable with smoking cigarettes publicly and only smoked in private. In February of 1997, in the course of a routine health check up in my office, an irregularity in the ECG was picked up. I was advised to stop smoking or else it would contribute to further deterioration of a cardiac problem that I had developed; still my habit of smoking continued unabated.

On 20th April 1997, a public lecture on Spiritual science by His Holiness Dr. Athavale was organized near Mumbai, India. I along with some others had the responsibility of organizing it. I was also entrusted with the responsibility of welcoming Him on the dais. I decided to derive complete benefit of this opportunity. “If I do not put an end to the addiction how can I face Him?” I thought. With this intellectual conviction, prayers, chanting, attending weekly spiritual meetings conducted by SSRF and some service unto the Absolute Truth (satsēvā), I was finally able to stop smoking completely on 19th March, 1997.

Previously I used to drink when I went on picnics with my friends. But with spiritual practice, my social circle changed and I stopped attending those types of picnics. Thus that habit went away by itself. Overcoming my addiction created such an impression on my family members that some of them also took up spiritual practice. It has now been over nine years since I quit smoking and I attribute this to my regular spiritual practice under the guidance of SSRF.