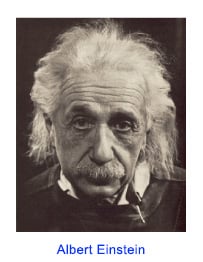 Albert Einstein (March 14, 1879 – April 18, 1955) is widely acknowledged as one of the greatest physicists of all time. He was voted Time Magazine’s ‘Person of the 20th century’. Considering his high profile achievements in worldly life as a scientist, we conducted spiritual research into his life to understand his spiritual background and how far he had gained and progressed spiritually in this lifetime. We felt that the learning would be of value to all scientists.

Through spiritual research, we found that prior to his life on Earth Albert Einstein was at a spiritual level of 50%.  Due to this, he was in the subtle-region of Heaven (Swarga) for a few months as a reward for his high merits in his previous life. Heaven is the beginning of the subtle positive regions in the Universe. When in Heaven, he ridiculed the divine play of some heavenly beings. For this reason, as punishment, his stay in the subtle-region of Heaven was cut short and he had to be reborn on Earth. Thus even though he ultimately attained great fame on Earth; due to his folly in Heaven, he had to give up an existence of superlative pleasures and no unhappiness whatsoever in Heaven. Compared to experiencing Heaven, the roller coaster ride of happiness and unhappiness that life on Earth provides is in itself a punishment.

He had a strong desire to help the human race through science. Due to this and good spiritual level, he had the ability to access the 5th Plane of Knowledge in the Universe through the subtle-aspect of his mind. We have explained how people can access knowledge through their-subtle mind and intellect in the article on sixth sense.

The Universal Mind and Intellect encompass knowledge about the entire Universe. Hence any answer can be received from it. The Universal Mind and Intellect function through the medium of each of the seven Planes of Knowledge in the form of subtle-frequencies. Therefore the seven Planes of Knowledge are made up of these various subtle-frequencies. Depending on the spiritual level of the person, one can receive knowledge from correspondingly higher and subtler frequencies. The 7th Plane of Knowledge is the highest and most subtle.

Because of his intense curiosity and spiritual level, he was able to perceive spiritual thoughts from higher Planes of Knowledge. In fact most of his ground breaking works such as E=MC2 was actually due to knowledge accessed from the Planes of Knowledge. However the spiritual knowledge accessed remained just at the mental level. The reason for this was that despite a well above average spiritual level, Albert Einstein did not have a good base of spiritual thinking and understanding.

The issue was that Albert Einstein was not able to convert the spiritual knowledge and translate it into an applied manner for spiritual progress of humanity. Hence the thoughts received did not come down to an action level, i.e. they did not get incorporated into his theories.

Some subtle-sorcerers (māntriks) tried to interfere in this process of Einstein receiving thoughts from the 5th plane of knowledge. They tried to steal the knowledge and pass it on to atheist scientists and give it a different twist with the help of their black energy. Their idea was to instigate the atheist scientists to give a scientific look to the spiritual thoughts and thereby disprove Spiritual science. But as these scientists were not as brilliant as Einstein, far from discovering new principles based on this knowledge, they could not even comprehend them.

4. Neglect of his spiritual goal

On the basis of divine gifts like a brilliant intellect, stability and perseverance, he revolutionised the scientific world and laid the foundation for future generations of scientists. But later, he himself got too engrossed in it and did not pursue the true two-fold purpose of life, one of which is to realise God.

Our entire modern day education system is set up to help us with our worldly endeavours and succeed in a worldly paradigm. However this is not the purpose of our lives. The purpose of our lives is to complete our give-and-take account and grow spiritually so as to finally merge with God. This is something our modern education system ignores in its curriculum. Accordingly unless our worldly endeavours have an underlying spiritual perspective i.e. to help ourselves and humanity grow spiritually, it only creates more and more karmic accounts for us thus keeping us in the cycle of birth and death.

5. Only Saints have the ability to be good Scientists

In order for science to be absolute, it needs to take into account all dimensions, i.e. the physical, psychological as well as spiritual dimensions. As modern sciences do not take into account the spiritual dimension, they are constantly in a relative paradigm and subject to frequent changes. That is why we find different theories being propounded about the same thing, e.g. the nature of light was claimed first to be particles, then as a waveform and then it was said that it has a dual nature of both particle and wave.

Only Spiritual science, which includes the spiritual dimension in its purview is not subject to change and is absolute. That is why theories of Spiritual science remain constant throughout, though the manner of their application can change according to time.

Though scientists are brilliant people who find out the scientific reason behind tangible worldly events in life, the real reason or root cause behind the scientific reason can be known only through Spiritual science. Until such time that this root cause is understood, the person (scientist) though brilliant and famous is still accorded an inferior position from a spiritual point of view. Only Saints can be good scientists, as they can understand the scientific as well as the Spiritual reason behind events. The paradox here is that while Saints have the best ability to be scientists, their entire viewpoint as far as research and acquiring knowledge, is geared towards helping humanity attain God and not towards worldly inventions.

6. Predicament of scientists of modern sciences

As scientists function in a state of relativity, not absoluteness, they are always unsatisfied and tense. With every new discovery and invention scientists face a feeling of incompleteness, one of ‘what next?’ Quite often this leads to more and more expectations from life. During the latter part of their lives when they find that their body no longer functions as per their expectations, i.e. they grow old and feeble, the inner quality of their life goes downhill rapidly. This same process happened in Einstein’s case. Even though Einstein was outwardly happy, his eyes appear sad. This is because scientific fervour alone cannot give complete contentment. Hence every discovery proves to be incomplete and ultimately leads to depression.

On the other hand, Saints are always engaged in activities without expectation and are detached from worldly pleasures. They always maintain the feeling that, “I live to be in service of God and that God only gets everything done through me.” Their ego is negligible and as a result they live their lives in Bliss (Ānand)  and are also liberated from the cycle of birth and death.

Even though a person is born with a divine quality like intense curiosity, unless this curiosity is tuned in the direction of merging into God, he is incapable of leading a life of a seeker of God. Einstein had intense curiosity that resulted in the activation of his subtle-mind. But due to a lack of spiritual practice for God-realisation this activation did not last forever. Hence he could not avail of the benefit of the divine, that is, real spiritual knowledge. Thus his life though full of worldly fame, was inadequate at a spiritual level. That is why when Albert Einstein died, he went to the Nether region (Bhuvarlok) a region lower than the subtle-region of Heaven that he came from.

Refer to our article on ‘Life After Death’.