How to greet – kissing | A spiritual perspective

Depending on the culture and context, a kiss can express various sentiments which include love, passion, affection, respect, greeting, friendship, and good luck, among many others. Also dependent on the culture, relationship and context, a person may kiss another on their lips, cheek, head, hand and each of these gestures may carry a different social significance. In today’s world, especially in western culture, a kiss on the cheek is recognised as a common form of greeting.

In this part of our series on spiritual research into greetings, we look at the effects of a kiss from a spiritual perspective.

At the outset, we encourage you to familiarise yourself with our article, ‘A spiritual perspective on greeting’. It provides the necessary background information to understand this article. The article explains how we are more prone to an exchange of subtle-energies when a greeting includes touch. Through spiritual research, we have found that most people are affected to some extent by negative energies. As a result, it is very likely that the exchange of subtle-energies between two people touching or hugging is spiritually detrimental. Most of us cannot perceive this detrimental effect, as we do not have the sixth sense ability to do so.

3. A note about greetings that involve touch

When a greeting involves touching, the following can be kept in mind. The use of touch enhances the transfer of spiritual or subtle-energies up to 100%, when compared to a greeting that does not involve touch. (Staring into each other’s eyes can also instigate a transfer of subtle-energies, depending on the types of negative energies involved.)

As stated in the table above, kissing mouth to mouth instigates the easiest and greatest transfer of subtle-energies. Negative energies generally enter a person through one of the orifices such as the mouth, nose, ears etc.  In fact, the intake of food is one of the easiest ways that negative energies affect a person.

From a spiritual perspective, the mouth is considered an impure void. There are two reasons for this:

Kissing another person mouth to mouth, as opposed to touching another person by means of a handshake, generates a far deeper level of sexual intimacy. This generally invokes an emotional response towards the other person which in turn can potentially destabilise the mind. Any destabilisation of the mind can be taken advantage of by negative energies as they have the capacity to exaggerate one’s emotions and make one even more emotional in a detrimental way. 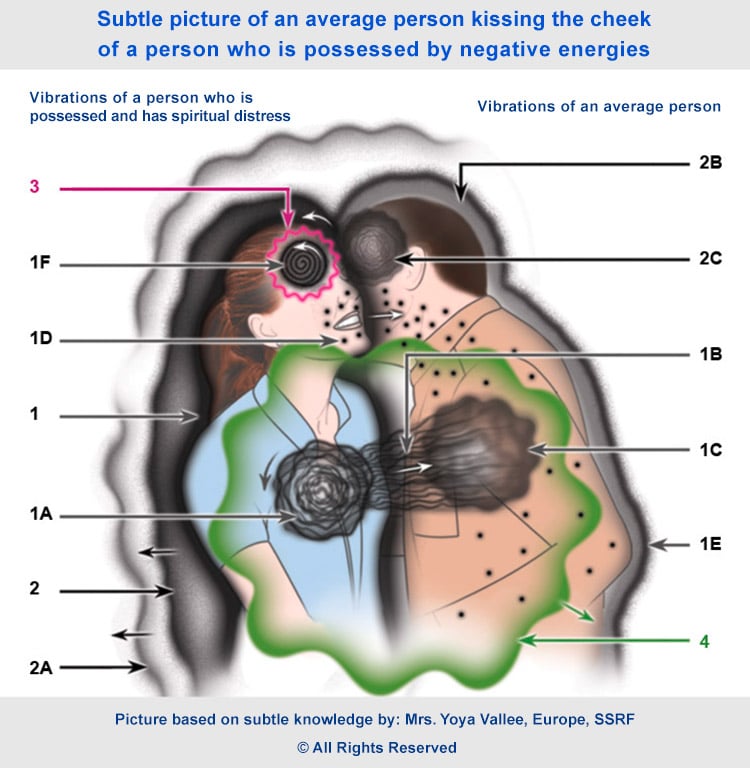 The table below provides the details behind each of the aspects in the above drawing based on subtle-knowledge. Refer to the article on chakras to acquire a better understanding of the table below.

The act of kissing another person generally gives rise to negative vibrations which attracts negative energies in the environment.  Out of all the greetings, kissing is actually the one that is most likely to give rise to Tama predominant vibrations. The negative effect of kissing a person who is possessed can last for many days, resulting in depression, negative thoughts, too many thoughts, etc. The person affected, due to a lack of understanding of the spiritual realm, will not comprehend that these are due to an inability to perceive the spiritual dimension.

There are exceptions to this rule:

If we kiss people who are friends and acquaintances with goodwill, then the goodwill hardly counts as the kiss is generally in lieu of a regular handshake. In such situations, the feelings are too superficial to generate any positive vibrations and the net result is most likely to be negative vibrations.

5. Avoiding the spiritual ill-effects of a kiss

The purpose of this article is to make us aware of the spiritual consequences of our everyday actions and not to make us feel afraid. Having knowledge about something that affects us adversely gives us the ability to take corrective measures.

The following points can be kept in mind: