At the outset, we encourage you to familiarise yourself with our article on a spiritual perspective on greeting. It provides key background information to understand this article. The article explains how we are more prone to an exchange of subtle-energies when a greeting includes the aspect of touch. Through spiritual research, we have found that most people are affected to some extent by negative energies. As a result, it is very likely that the exchange of subtle-energies between two people touching or people hugging is spiritually detrimental. Most of us cannot perceive this detrimental effect, as we do not have the sixth sense ability to do so.

3. A note about greetings that involve touch

When a greeting involves the aspect of touch, the following can be kept in mind. The use of touch enhances the transfer of spiritual or subtle-energies up to 100%, when compared to a greeting that does not involve touch. (Staring into each other’s eyes can also instigate a transfer of subtle-energies, depending on the types of negative energies involved.)

Refer to the article on the “Spiritual perspective on a kiss”.

4.1 Various scenarios in the case of hugging

The following table provides the various scenarios we can come across in day-to-day life, the likelihood of it happening, and the possible outcome.

4.2 A drawing based on subtle-knowledge of a possessed person hugging an average person

The following drawing based on subtle-knowledge, which shows the spiritual effect of a hug, has been drawn by Mrs. Yoya Vallee, a member of SSRF’s spiritual research team. Using her advanced sixth sense of vision, Yoya provides us with a glimpse of the interplay of subtle-energies when a woman who is possessed hugs a man who is mildly affected by negative energies. 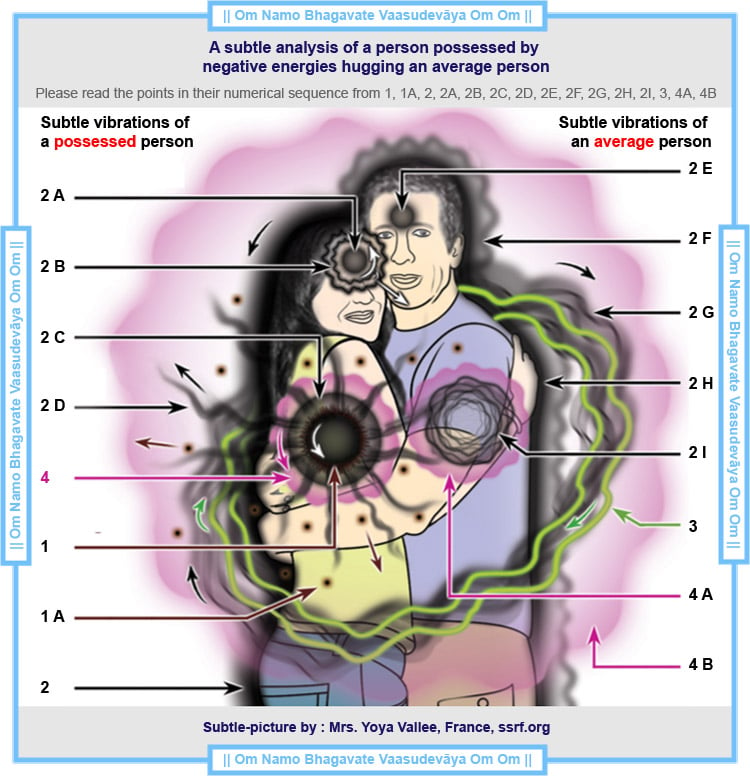 Refer to the article – What are drawings based on subtle-knowledge.

The table below provides the details behind each of the aspects in the above drawing based on subtle-knowledge. Refer to the article on chakras to acquire a better understanding of the table below.

As you can see from the above explanation, hugging a person who is possessed by negative energies is extremely detrimental to us.

4.3 Additional points on the spiritual repercussions of people hugging each other 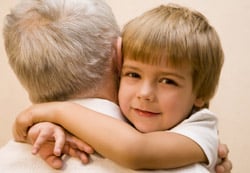 Given the above information gained through spiritual research on the effect of a hug, what then is the perspective in the case of children? Being hugged and touched by their parents is important for the emotional well-being and development of children. Young children will also naturally hug their parents when they feel threatened by an unfamiliar person or situation.

Unfortunately, children and their parents are just as prone to negative energy exchanges when they come into contact with each other. The child who is possessed can affect the parent and vice versa. Hence, spiritual precautions as mentioned in section 5.2 should be incorporated.

5. Efforts to minimise any detrimental spiritual effect of a hug

In order to incorporate measures to overcome the detrimental effect of a hug or touch as a form of greeting, it is important to take the above information seriously. However taking this information seriously might be obstructed by the thought, “I have hugged people all my life and nothing untoward has happened, so this information can’t be true or must be an exaggeration.” This line of thinking will only undermine any efforts to protect oneself from any detrimental spiritual effects from a hug. For this, it is prudent to bear the following points in mind:

5.2 Remedies to overcome any detrimental effect of a hug

Hugging loved ones is something we may not be able to avoid and may not want to avoid, in spite of being aware of the above spiritual research. SSRF recommends the following to minimise the spiritual risk of a hug: