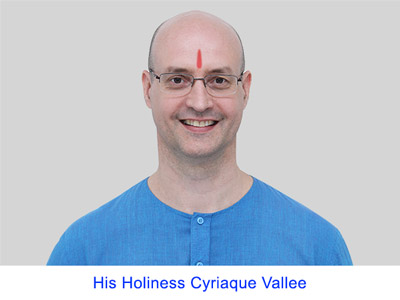 In December 1999, I met His Holiness Dr Athavale for the first time. When I went to bow at His feet, I could feel my whole body shaking. It felt like I was receiving an immense amount of energy from His feet.

Then He placed His hand on my back and I remember Him saying, “I give you a new life.”

At that moment, I felt overcome with spiritual emotion and I started crying. Then the whole environment in front of my eyes became white, I could not see anything beyond that and I lost the awareness of time. One seeker who was present during this experience of mine came to hold me and helped me to get up. I remember that at that time, I could not think or move for the next 20 minutes or so.

This experience was so strong and imprinted in my mind that whenever I had some doubts in my mind or obstacles in my spiritual practice later, remembering this experience helped me to easily overcome them.

Editor’s note : The feet of a Saint emit the most amount of spiritual energy. Losing the awareness of time is a higher level spiritual experience.

In April 2007, I was working as a sales executive in France. I would need to drive around 150 km per day on average around Paris and Île-de-France, which is a district that includes Paris.

One afternoon while I was driving through a tunnel, I had a life changing experience. The tunnel had two lanes for to and fro traffic. My speed was between 50 to 80 kmph and there was no possibility of stopping anywhere as it was an underground tunnel. I was lost in thought about my next appointment when all of a sudden, I began to chant the Name of God with a lot of intensity. The intensity with which the chanting started really puzzled me.

Then after two minutes or so of chanting I looked to my right to the passenger seat and to my amazement I saw His Holiness Dr Athavale sitting next to me. It was like seeing a completely materialised form of His Holiness Dr Athavale. In that moment, I experienced a calmness that was so deep that I almost felt as if I were anaesthetized.

Then after a few seconds one man suddenly jumped on my car. I could even see his face clearly through my windshield. Despite this extraordinary occurrence, I reacted very calmly and did not swerve my car. Had I swerved, it would have been fatal as there was oncoming traffic in close proximity. As I was in the tunnel, I could not stop but I did look in my rearview mirror and saw the man standing in the middle of the road seemingly unharmed.

This experience dramatically increased my faith in His Holiness Dr Athavale. His presence protected me from a fatal accident and I realized that He is just as present in my life in Paris as He is when I meet Him at the Ashram.

Editor’s note : In a person’s life, there are periods where one can be faced with a situation that could lead to untimely death. God and the Guru principle are beyond time and space and come to protect a seeker in situations where there is a life and death possibility. This is so that the seeker is unharmed and is able to continue his or her spiritual journey.