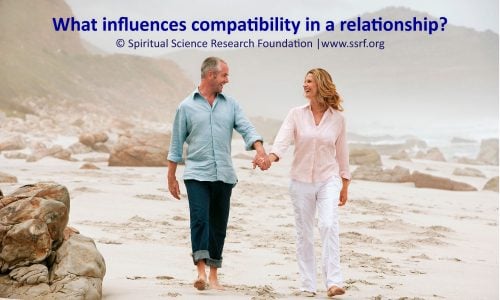 1. Introduction to what influences compatibility in relationships

Many people dream of having a relationship where they will grow old together. A relationship which is built on mutual respect and trust, where there is companionship, love and compatibility. However, in today’s world this can be elusive. Many relationships start out okay but how they will end or whether they will last depends on many factors. Having an understanding of what these factors are will definitely provide insight into our relationships and why some work and other don’t work as well.

In this article, we share the various factors that can affect any relationship between two people. It can be your spouse/partner or a friend or colleague.

If one asks a mental health professional or if we search on the internet for what influences a relationship, the chances are that apart from looks, we will be provided with a list of factors which are primarily psychological in nature such as mutual respect, trust, care, having similar interests, sense of humour, etc.

However, to assess the underlying factors behind anything in life, one has to view it holistically, which means including the spiritual aspects.

Through spiritual research, we have found that the factors that influence the compatibility of a relationship can be broadly categorised under 3 aspects of life. They are physical, psychological (which includes intellectual) and spiritual. In the chart below, we have provided the approximate effect each of these aspects exerts in a person’s relationship. 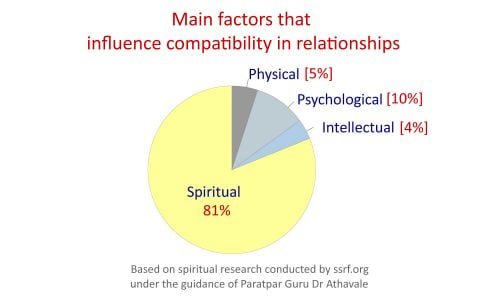 This knowledge is received through spiritual research based on advanced sixth sense. As you can see from the above chart, the interplay of spiritual factors in two people’s lives play a vital role in the quality of their relationship.

3. Breakdown of the main factors that influence compatibility in relationships

So, what are these spiritual factors that influence us and our relationships to such an extent (81%) ?

In the table below, we have expanded upon the various sub-factors that influence compatibility in relationships. It is important to note that we have separated the factors according to whether the couples or people involved in a relationship are active seekers of God or not. The reason we have made this split is because the spiritual factors change depending on whether one is doing spiritual practice. 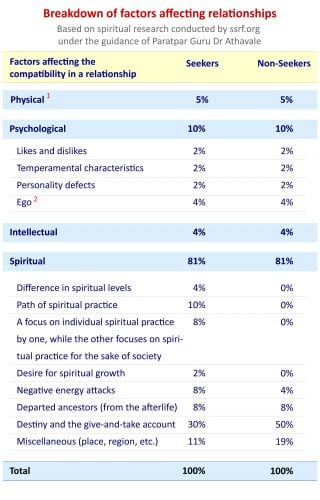 Footnotes (based on the numbers in red in the table above) :