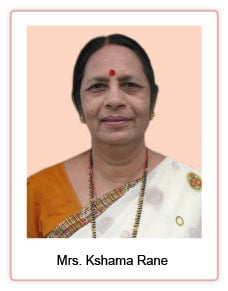 This is an experience of Mrs. Kshama Rane and three other seekers who are doing spiritual practice under the guidance of His Holiness Dr. Jayant Athavale. These four seekers were allotted the service unto the Absolute Truth (satsēvā) of making aprons for spiritual healing. These aprons when worn allow seekers to position Deities’ pictures or small strips with a Deity’s Name on it, at the places on their body corresponding to each of their chakrās. The seekers involved with this service unto the Absolute Truth also make placeholders out of cloth for the 8th and 9th orifices (excretory and sexual organ) of our bodies which allow sāttvik stimuli such as a Deity’s picture or a Saint’s handwriting to be placed over the sexual and excretory organs. This is because the lower three chakras are more easily attacked by negative energies and that brings out our baser desires which in turn increases the obstacles in our spiritual practice. The following experience occurred while this section on spontaneous combustion/burns was being written and has been narrated by Mrs. Kshama Rane.

On 20th February 2010 we moved the tailoring department to a larger room so that more seekers could help simultaneously help with the satseva of making aprons. As that room had not been used in a while, we spent some time cleaning the entire room. We also purified the premises at a spiritual level by lighting SSRF incense sticks around the room and collectively praying and chanting the Name of God. Only then did we unpack the bundles of cloth out and put them on the floor. The bigger bundles were kept to the side while the smaller pieces of cloth that were ready to be cut were kept separately in front of us.

After sometime we began to get a burning smell. At first we thought it was coming from outside. But after about 10 minutes to our astonishment, we saw smoke coming out from under a piece of cloth that was lying just next to us. As we turned the cloth over we saw a huge gaping smoking hole in the material. 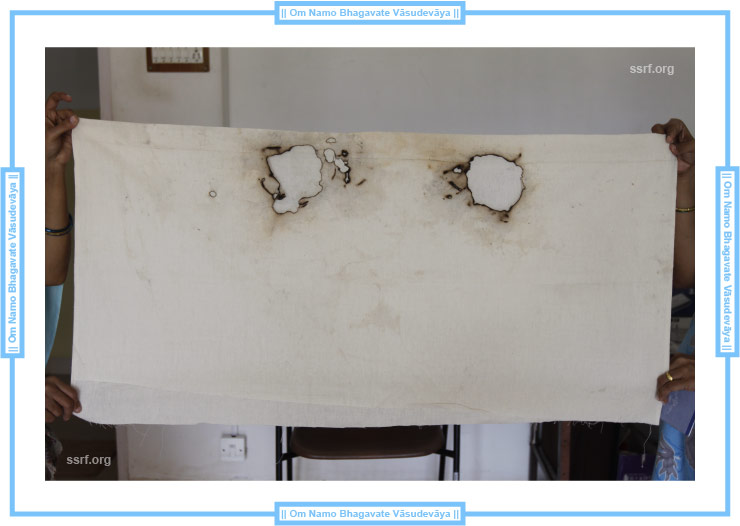 We tried to stop the cloth from burning by patting it with our hands but to no avail. So then we poured the nearest bottle of drinking water we had on the cloth and the burning subsided. This encounter of spontaneous combustion was witnessed firsthand by the four seekers who had been assigned this satseva, i.e. Dr. Mrs. Bhosale, Ms. Aruna Singh, Mrs. Sunandita Sural and myself. There was no catalyst around that could have caused the burning to occur.

Ever since I have been given this satseva, I have experienced various types of distresses that have created obstacles in the carrying out of this satseva and in my spiritual practice. Some of the distresses include headaches, nausea, irritability, not wanting to touch the satseva, etc. It is ironic that I should have had this experience because quite often in the past when I would hear of spontaneous combustion or the burning of the pictures of Deities and Saints due to negative energies, I would always wonder if there was a scientific explanation to this. After having this experience I am sure that the spontaneous burning of objects due to negative energies can occur even if there is no scientific explanation behind it. It also made me understand the importance of the satseva that we were asked to complete as it was for the spiritual healing of other seekers. After narrating the entire incident to the subtle department of SSRF they confirmed that the spontaneous combustion was a subtle attack due to negative energies.