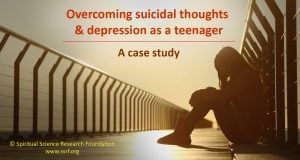 As a young child, I had a sincere and firm belief that God existed. Though my parents were not particularly religious, social functions in our community often took place at local temples. As such, I was introduced to the worship of God at a young age and took a liking to it. At home, I would regularly pray and worship God in my own, simple way. I would sometimes also read stories about Gods and Saints during my free time.

When I was 7 years old, my family immigrated to Canada. I suddenly found myself in a new country without friends, relatives or cultural bearings. I made every effort to integrate and, in the process, rejected the religion of my birth as ‘superstitious’, ‘unscientific’ and ‘backward’.

Life continued uneventfully until I reached my teenage years. At this time, I suddenly started to suffer from severe depression and suicidal thoughts. The desire to kill myself would peak in intensity every few weeks and it would be almost unbearable. Since I had a good family life and no real problems, I was at a loss as to why I was having such terrible, recurring thoughts. My depression became my longstanding, terrible secret, as I was ashamed to confide what I was going through to friends and family.

By the time I was 16 years old, I felt overwhelmed by my negative thoughts and suicidal tendencies. I decided that life was pointless, and that it would make the most sense to end things once and for all. Since I had embraced atheism for some years, I felt that by committing suicide, I would simply cease to exist and that all my suffering would be over. Thus, I took an overdose of pills and said my goodbyes to life.

However, even at this darkest hour, I felt that God was taking care of me.

I ended up surviving the suicide attempt after a harrowing stay at the hospital. Sometime afterward, I was reunited with my mother. She had been visiting relatives in Asia and had not known, until her return to Canada, that I had tried to kill myself. My mother told me that on the day I had attempted suicide, she had visited a local man renowned for his advanced level of sixth sense. She had asked him how I would do at school. The man told her not to bother about how I would do at school, as there were far more serious matters to worry about. He told her that on that day, either myself or my grandfather (my mother’s father) would pass away.

My mother roundly dismissed what the man had told her as unbelievable, as I was in perfect health. However, a few days later, my mother learned that her father had indeed suddenly passed away on the same day as my suicide attempt.

This experience of someone accurately predicting the death of my grandfather shook me profoundly, and led me to believe, without a doubt, that there are powers in this universe beyond our understanding. From that moment on, I rejected atheism and began my spiritual journey.

In my 20’s, I developed a thirst for spiritual knowledge in parallel with living worldly life. During my free time, I began to read all the books I could find on Spirituality. I also joined one spiritual organisation after another in search of an organisation or a Guru that could teach me more about the subtle dimension.

In 2007, I found SSRF’s website by chance. The information I found on the website, particularly on the purpose of life and where we go after death, resounded with me. There was information on the website that I had never read anywhere before, and everything was presented very clearly and practically. I read voraciously through the website, reading and re-reading many articles. It took me several more years, however, to take the next step and start putting the knowledge into practice.

By 2014, I had begun to progress in my career. I also continued to have disappointments in my personal life. The depression from my teenage years continued unabated through adulthood. I was also beginning to experience a severe inability to get married. I would meet someone, things would go well, then suddenly there would be a rupture in the relationship. This was even though both the other person and I wanted to be together. This strange turn of events repeated itself again and again. I began to feel that there was some supernatural factor that was causing these problems and felt desperate to find a solution. I remembered the SSRF website and decided to see if the spiritual practice recommended by SSRF could help.

From 2014 to 2015, I began to make some efforts to practice Spirituality under the guidance of SSRF. I attended SSRF’s free online meetings, chanted the name of God from time to time, and did spiritual healing remedies. Though I was not regular with my efforts, I found some improvement in my well-being. I also found myself in a promising new relationship. I thought that things had finally improved and abandoned spiritual practice to focus on worldly life.

In 2015, just when I felt that my life had turned around, my fiancé, at the time, cancelled our wedding two weeks before the ceremony. This was now the 4th time that such a twist of events had taken place in my life. I was completely crushed and spiraled into deep depression.

By 2018, my depression and negativity about life had significantly worsened. I also started to experience health problems and issues at work that I was finding myself emotionally unable to deal with. I began to suffer from frequent panic attacks and had to struggle to get out of bed. I felt weak and utterly broken, and felt as if the depressing, suicidal thoughts were winning. I considered giving up and going into psychiatric care. However, in a final, desperate cry for help, I prayed to God one night to help me and chanted for the first time in two and a half years.

That night, as if in answer to my prayers, God gave me the thought to reach out to SSRF and try spiritual practice again – but to do it this time with real effort.

7. Returning to spiritual practice with SSRF

In November 2018, I reached out to my former guiding seeker at SSRF and asked if I could return to spiritual practice. She warmly welcomed me back, and from that day onwards, I made a sincere resolve to put everything I had into spiritual practice, as a final stand against my problems.

By God’s grace, after only one week of chanting the name of God, I felt an immense sense of happiness and peace while walking to work. I realised that this was the first time that I had felt happiness in many years. This experience touched me profoundly and gave me the motivation to continue my efforts.

I now became very serious about my spiritual practice. I attended weekly spiritual meetings without fail and did whatever was prescribed by my guiding seekers, even if I initially had doubts as to whether it was useful or worthwhile. In this manner, I began to do several hours of chanting the name of God per day, as well as daily personality defect removal (PDR) efforts, and service unto the Absolute Truth (satsēvā).

I noticed that with regular spiritual practice, my depression was reducing. After the first month, my depression reduced significantly, and I no longer had suicidal thoughts. It was incredible that the afflictions that had been ruining my whole life were being overcome through spiritual practice. This also motivated me to keep going, no matter what the obstacles.

8. Coming to the Spiritual Research Centre and Ashram

In early 2019, I had the opportunity to attend a 5-Day workshop for spiritual progress held at the Spiritual Research Centre and Ashram in Goa, India. The workshop was a life-changing experience for me. I not only received valuable guidance and tools for deepening my spiritual practice but I was also able to benefit from the company of the many Saints and evolved seekers residing at the Ashram. It was also at the Ashram where I had my first experience of the state beyond happiness and unhappiness termed as ‘Bliss’. The experience of Bliss was beyond words, and completely transformed my perspective on life and what is truly of value.

During the course of my stay, it was shared with me that I had been severely affected by negative energies, and that the distress from these negative energies was what had been causing so many of my problems in life. For the first time in my life, I truly understood why I was suffering all these years without any tangible reason. Words cannot express how grateful I am to H.H. Dr Athavale for saving my life through His guidance on spiritual practice.

Since I began to make sincere efforts in spiritual practice, my life has been completely transformed. By God’s grace, I no longer suffer from depression and mostly feel calm and happy. SSRF’s research has found that 80% of the problems in our lives have a root cause in the spiritual dimension. This was certainly the case for me, and I am living proof that these problems can be overcome more rapidly than we think through faith in God and spiritual practice. 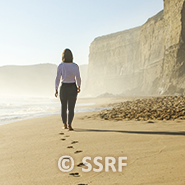