If we stand back and look at our lives, almost our entire day is spent in either doing or achieveing something which will give us happiness, satisfaction or pleasure. On the other hand, it could also be spent trying to overcome a certain problem or difficulty.

As much as we would like to pursue activities that would lead to pleasurable feelings, as a matter of fact it would seem to some of us, that the problems we encounter far outweigh the good parts of our lives.

These problems take different forms for each one of us.

Throughout the day, we are bombarded with issues and problems. Sometimes we can be affected in more than one dimension of our life. For example, we may face a financial set back and marital disharmony both at the same time. When a lot of life’s problems descend on us at the same time, that’s when it really gets tough on us. Sometimes we can be driven to a point of extreme despair and some of us may even get suicidal thoughts.

The Spiritual Science Research Foundation (SSRF) through this section, explains the root cause of problems and ways and means to overcome them.

How do we generally tackle problems and difficulties in our life?

There are typically three ways in which we try to address problems in our life.

This is when we do not address the problem, but instead distract our mind by focusing on something else to ease the pain.
An example of this would be when a woman after a quarrel with her spouse goes shopping, while her husband goes to the local pub to drown his sorrows. Needless to say, the problem still exists. It has been dealt with it at a superficial level, i.e. brushed under the carpet. 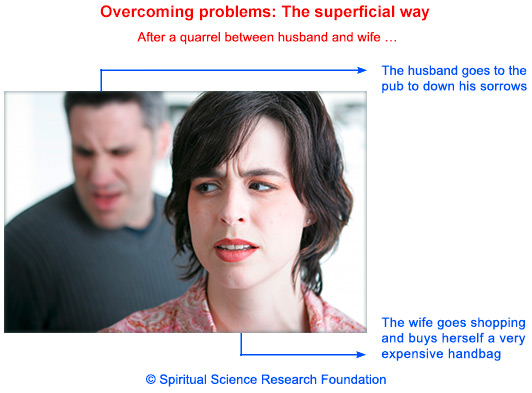 Quite a number of us use this way especially when the root of the problem is too painful to address.

Most of us try to overcome our problems by identifying the cause and remedying it with the help of modern sciences. This includes expert advice that comes from many streams such as legal experts, financial consultants, psychologists etc.

For example, if a person has eaten contaminated food and has a stomach pain he would take an antibiotic to overcome the gastric problem. Here, he has basically put the same three steps in overcoming the problem.

This three step process generally plays out in all cases where we use modern sciences to overcome problems in life.

Some people turn to religion:

Modern research has also shown that people who are more religious are more likely to be insulated from problems they have in life and thus less likely to be driven to extreme situations that make them lose themselves. There was a study conducted by the National Centre on Addiction and Substance Abuse (CASA) at the Columbia University. It was found that adults who never attended religious services were eight times more likely to use the drug marijuana than those who attend religious services on a weekly basis. (Ref: casacolumbia.org, 2001)

What then is the exact relationship between religion, Spirituality and difficulties being solved or overcome? The Spiritual Science Research Foundation has explored this relationship in depth and through this section will be providing information on a regular basis.