SSRF has used PIP equipment to study various aspects of spiritual science. In this example, we used PIP to understand the difference in the energy field around spiritually pure objects such as a Saint’s handwriting as opposed to a normal person’s handwriting. We also compared this with the spiritual research on Saint’s handwriting conducted through advanced sixth sense.

Transcript of the video

Recently with the advancements in biofeedback machines, SSRF has been using these machines to study the effects of various stimuli on our auras, our energy systems and chakras. This has been of great benefit as it helps to physically endorse and prove the research we have already done through spiritual means. For example there were some items that we already knew that had healing properties through sixth sense itself. One such case is the handwriting of a spiritually evolved person also known as a Saint. Do refer to our website where we have described in detail who a Saint is. When seekers were asked to hold a piece of paper with this handwriting, within a short period of time a dramatic and positive effect was seen on the readings given by  biofeedback machines measuring their energy fields and chakras. This also proved the importance of spiritual practice as a means to obtain super health where one person can positively influence many others just by His presence.

One of the machines that we have used is the PIP and it stands for Polycontrast Interference Photography. It is a machine that uses a technology similar to the Kirlian Photography and it is able to study aspects and changes of the energy fieldi.e.the aura around people and objects.

We were able to make many studies with the PIP machine with the help provided by Dr. Thornton Streeter and Dr. Aniruddha Gandhi from the Centre of Biofield Sciences.

2. Nature of information available from pictures generated by the PIP technique 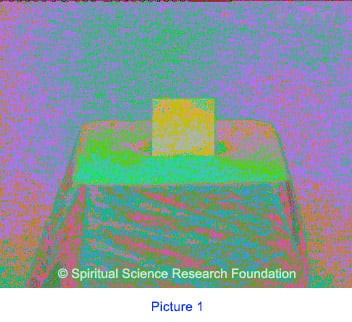 This is an example of the energy field around a person’s handwriting who we considered an average seeker doing regular spiritual practice in the SSRF research centre. We placed it in a small envelope and then placed it again in a bigger white envelope.

With respect to the colours and their interpretation orange, red and purple shades indicate negativity; while yellow and green signify positivity.

Generally we like someone’s handwriting as it looks good but for us, good means each alphabet written in a correct manner. Here, our eyes see the beauty of the letters and our mind likes it but with spiritual practice we can also perceive the subtle vibrations associated with it.

Such a person will perceive the handwriting of a Saint as good no matter how bad it is in appearance. There is an experience of Chaitanya or Divine Consciousness from it.

His Holiness Dr. Athavale is the source of inspiration of University of Spirituality and SSRF. In a similar manner an experiment was done with the handwriting of H.H. Dr. Athavale.

The picture to the left is a PIP picture of the handwriting of an average seeker and that to the right is that of H.H. Dr. Athavale. Now, when we compare the two pictures,

1.      The PIP picture of the handwriting of H.H. Dr. Athavale shows far more positivity by the green colour in the surrounding area around the object on the table. Now in comparison there’s much less green in the picture of the average seeker.

Now it’s  important to understand that the readings obtained from machines like the PIP can never be a substitute for what can be obtained through one’s sixth sense. Machines at best can only measure the most tangible or grossest part of the spiritual dimension. The visuals and the findings obtained through this experiment are a mere superficial representation of the knowledge that can be acquired through actual spiritual experience. The main purpose of this experiment and displaying the visuals is to show:

1.      That the aura or the energy field around a person is very real and can be captured to some extent

2.      And that science is trying to understand the human energy field or the aura.

The aura of a Saint is not the same that is captured by any man made machine.

4. Handwriting of a Saint as seen through sixth sense

In modern science we observe and analyse and infer through the means of  our 5 senses, mind and intellect in the form of words, touch, image, taste, smell and emotions and thoughts.

However in spiritual research it is subtle sounds, subtle touch, subtle smells, subtle visions of light and vibrations and the ability to tap into the Universal Mind and Intellect.

Now this is a drawing based on subtle-knowledge taken of the handwriting of H.H. Dr. Athavale. Very subtle vibrations of Chaitanya or Divine Consciousness can now be picked up.

1. Chaitanya or Divine Consciousness is seen flowing in the yellow colour from the sentences.

2. The Spiritual Energy of Shakti is also seen emanating around the words in the sentences.

3. Halos of Chaitanya are generated around the handwriting and are also transmitted. The Chaitanya is now transmitted from the four corners of the paper and

4. Waves of Chaitanya are also transmitted from the words in an upward direction and the pink particles of bliss are transmitted into the environment.

As you can see there is a vast difference in what can be perceived by the machine and through sixth sense.

Similarly, we have made a comparative study of energy fields related to human nails, hair, and pictures of various categories of seekers.

Through this experiment today I would like to put before you some of the key findings.

2. Many people disbelieve the existence of saints. Understanding the positivity with the PIP pictures we hope that it will instigate people’s curiosity to find and learn more about the subject and finally attain the spiritual level of a Saint themselves.

3. Spiritual practice is necessary as through it one can achieve the level of a saint wherein one can positively influence one’s environment.

I hope this explanation about the subtle aura has awakened your curiosity about this subject. For further information please do visit our website www.spiritualresearchfoundation.org

We wish you the very best in your spiritual journey.