Transcript of the video

Namaskar and welcome to all

Recently, with the advancements of biofeedback machines, we have been using these machines to study the effects of various stimuli on our auras, energy systems and chakras. This has been of great benefit as it helps to physically endorse and prove the research we have already done through spiritual means.

One such machine was the DDFAO which is basically a French acronym which stands for a Computer-Aided Screening and Functional Diagnosis.

2. How does the DDFAO work?

The DDFAO measures the body’s electrical activity, actually using the same principles which are behind the well-known EEG and ECG machines, but instead of focusing just on the brain or heart activities, the DDFAO applies a technique to the entire body, to record an ElectroSomatoGram or an (ESG).

The equipment that the DDFAO contains is basically 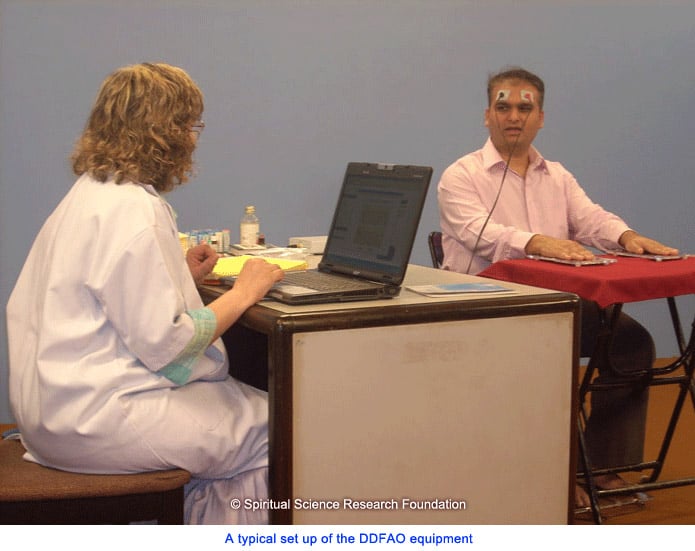 The electrodes are taped to the person’s hands, feet and forehead, and then, a very low electric current is passed through the body of the person measuring the body’s electrical activity. Then running various algorithms, the readings are finally displayed on a computer in a graphical format. One such graphical aspect that is displayed is the state of our chakras. I will touch upon what chakras are a little later in this video.

Now we used the DDFAO to do various experiments that help us to understand the spiritual impact of our various activities on a day-to-day basis and their impact on our chakras and our spiritual practice.

Every day we look at people, we communicate with friends and associates with little understanding of the spiritual impact that is there on us. With the help of the DDFAO we were able to show this impact depending on the spiritual state of the person that we were communicating with. We also ran various other comparative studies that included the impact of vegetarian and non-vegetarian food, types of clothes, the music that we listen to, and the alcohol and fruit juice that we drink.

Now there are seven main chakras and they are aligned with the spinal column.

The seven main chakras i.e. the energy centres that have different and related qualities associated with them are as follows:

The upper four chakras starting from the heart region are

Now the three lower chakras i.e. starting from navel area to the end of the spinal column are

4. Studying the effect of prayers using the DDFAO Biofeedback machine

Making use of this DDFAO technique, we tried to study the effect of different aspects in spiritual practice like chanting the Name of God, being in satsang or the company of The Truth or being in the company of Saints and listening to their discourses, service unto the Absolute Truth (satsēvā), saying a prayer and we tried this across various groups of seekers.

4.1 Setting up the experiment for prayers

In this video, using the Electro-somatographic Scanning Technique using the DDFAO, we will be demonstrating the effect of prayers on the various chakras. These readings obtained from the DDFAO were available in the form of bar charts and numerical values. Using this technique, we mapped the bio-field energy associated with the seven Kundalini chakras i.e. the energy centres in the body of a seeker, and we noted the reading of the seven chakras of the seeker before and after prayer.

4.2 Experience of a seeker along with the experiment for the effect of prayer

Mrs. Shravani Parab, a seeker in the SSRF Ashram, in Goa, who was a part of the experiment, narrated her condition before praying.

I was experiencing severe distress over the last 10-12 days. My Vital energy (Prāṇa-shakti) had reduced considerably. I was having physical problems like body ache and headache. Apart from this, there was psychological distress too, for e.g. irritation and suicidal thoughts. Due to this I was in bad shape. I was also not able to do service unto the Absolute Truth. During this period, scanning was done on me.

After the scanning, I prayed ardently to His Holiness Dr. Athavale, “O Lord I am not able to pray, chant or serve God in anyway. Please you only get all this done through me.” Then, I lay down for a while. I experienced that someone is getting the chanting and praying done through me. He was H.H. Dr. Athavale Himself. This went on for 3 hours. After this , my condition improved. All my body pain disappeared. My Vital energy also increased to 80-90%. My irritability also disappeared. After that, scanning (on the DDFAO) was repeated.

Now for comparison, we have provided the quantitative analysis and the bar diagram of the bio-energy fields of the body associated with the seven chakras, obtained through scanning, this is before and after praying.

Status of the chakras of Mrs. Shravani Parab before the prayerful state

The scanning before praying was done at 12.33 p.m. and after praying at 5.31 p.m. The bar charts of these readings were as follows:

The figures on the Y-axis denote the numerical values. The figures below the 0 value on the Y-axis are negative (minus) and those above are positive (plus). Now the bars from the left to right are basically the chakras numbered from 1 to 7, and they reflect serially the state of the bio- energy fields  of the 7 chakras starting from the root chakra on the left to the crown chakra on the right. The information available in the bar charts is also available in numerical form.

Now the importance of acquiring information about the Kundalini chakras is that these seven chakras are energy centres and they play an important role in the fine tuning of the subtle energy flow in the subtle-body. The imbibing of the subtle black energy as well as positive energy or Divine consciousness (Chaitanya) from the outside and its transmission through the body is done through these chakras.

Now let us see a bar diagram of the condition of the chakras of Mrs. Shravani after praying.

Status of the chakras of Mrs. Shravani Parab after the prayerful state Now I will try to explain the conditions of the seven chakras through the readings acquired from this machine.

As you can see there is a clear difference in the reading before and after the prayerful state that Mrs. Parab experienced.
Here, we have only presented only one example of the effect of intense praying of a person.

5. Key findings in this experiment

Here becoming more inert with the bottom chakras actually is a positive sign. These centres are associated with likes and dislikes and the desires in a worldly sense. Now as a person does spiritual practice the likes and dislikes reduce and so does one’s desires which actually eats up a lot of our mental energy. One is able to be more focused on their spiritual practice and only the necessary amount of energy required for running the related organs is utilised. Now as you can see there is a clear difference in the readings before and after the prayerful state of Mrs. Parab. The upper chakras have become more active while the lower chakras have become more inert or inactive.

5.1 Spiritual science behind the difference in readings

Now this is the interesting part, the chakras have a 90% effect on the mind and only a 10% effect on the body, hence even if the lower chakras become inert or inactive its effect is mainly on the mind, the Raja-Tama thoughts or desires and likes and dislikes, they all reduce and finally stop at higher spiritual levels. That is why the upper chakras can do more tasks or more spiritual practice in a better way. As the upper chakras become active through spiritual practice it helps to improve the Sattva component further. Here we have presented only one example of the effect of intense praying on a person.

So let’s see the key findings in this experiment

One is able to be more focused on spiritual practice and only the necessary amount of energy required for running the related organs is utilised.

I hope you have learned much from the video which just begins to explore the possibilities of various experiments that can be done to improve our state of well being and improve upon our spiritual practice to realise the true aim of life which is the realisation of God.