Summary of the phenomenon: A fragrant liquid spontaneously appeared in a bowl in the room of His Holiness Dr. Athavale. It has been observed to have a spiritual healing effect on seekers, especially those affected with negative energy distress. An advanced sixth sense reading of the Divine perfume shows that the perfume is not of this Earth and is a combination of the fragrances present in the higher subtle regions of the universe. Analysing the vibrations using biofeedback machines also corroborated the sixth sense readings, which indicate that the Divine perfume is highly positive.

1 Background information about the spontaneous materialisation of fragrant perfume

In August 2007, we observed a unique spiritual phenomenon take place at the Spiritual Science Research Foundation’s (SSRF) Spiritual Research Centre in Goa, India. A fragrant perfume spontaneously appeared in an empty bronze bowl. In 2004, this same bronze bowl had been used to hold oil used to massage H.H. Dr Athavale’s feet. At that time a similar fragrance was observed emanating from the oil even though it is not the property of the massage oil.

The purpose of the perfume materialising is to give strength to seekers in the coming adverse times. The fragrance being emitted from the fragrant perfume is unique and has been observed to have a spiritual healing effect on seekers when inhaled. We have provided two pictures taken during a spiritual healing experiment conducted in relation to the Divine fragrance. A cloth that was used to wipe the bronze bowl also inherited the fragrance. Seekers who were suffering from negative energy distress were exposed to the cloth which was placed in a glass jar. The negative energy possessing them manifested and is seen trying to fight with the fragrance. During the course of the experiment, we observed that the power of the negative energy (that had manifested in the seeker) reduced substantially due to the healing power of the Divine fragrance. 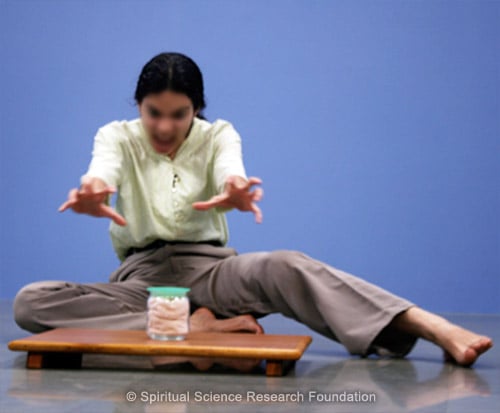 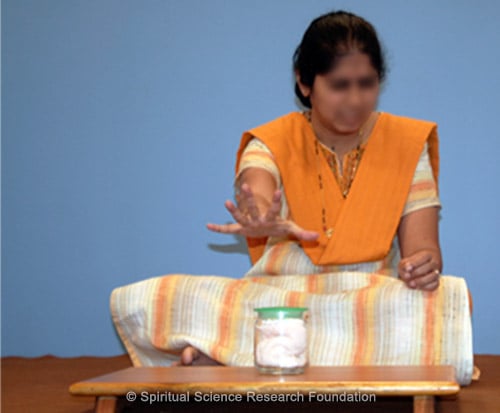 The negative energy in a seeker cannot tolerate the positive vibrations of the Divine fragrance.

Process of how the fragrant perfume was formed

Through spiritual research we discovered that the process of creation of the perfume started in 2005, but it was not until August 2007 that it materialised all at once. When the fragrant air in the room of H.H. Dr. Athavale came in touch with the Absolute Water Principle (Āpatattva), the perfume started to appear to a limited extent. In August 2007, when it came in touch with the Absolute Earth Principle (Pruthvitattva), it materialised all at once as the perfume in the bronze bowl with a unique Divine fragrance. This is because for anything to materialise, it requires the help of the Absolute Earth Principle.

The Divine fragrance is actually comprised of a combination of the atmosphere present in the various positive subtle regions of the Universe which are inhabited by evolved souls after death. This chart gives a breakdown of the composition of the Divine perfume in relation to its properties imbibed from each subtle region of the universe.

In the following chart, the difference between the artificial perfume and Divine perfume is shown with respect to the Absolute Cosmic Principles (Panchatattva).

From the above chart we see why higher levels of spiritual healing experiences are obtained from the Divine fragrance. Compared to artificial perfumes, this Divine perfume has a greater proportion of higher level Absolute Cosmic Principles such as Absolute Ether Principle (Ākāshtattva), Absolute Air Principle (Vāyutattva) and Absolute Fire Principle (Tējtattva). As a result even though this perfume is predominantly made from the Absolute Water Principle a person can have various spiritual experiences at the level of Fire, Air and Ether.

When analysing the chemical composition in a laboratory, we found that the Divine perfume liquid contained a high percentage of Carbon (76%) and Oxygen (23%). We were unable to continue tests to ascertain the percentage of Hydrogen as there was not enough liquid to do so.

If one has an above average sixth sense ability, one can easily perceive the spiritually pure nature of the perfume and the positive vibrations that it emanates. Some biofeedback equipment such as the RFI (Resonant Field Imaging) and PIP (Polycontrast Interference Photography: a bio imaging type of equipment) are able to pick up the vibrations around an object and display it in a visual format. This gives an average person the opportunity to visually see the aura or energy field of an object.

Click on this link for more information about the PIP and its uses.

1. The RFI reading of the Divine fragrant perfume:

2. The PIP reading of the Divine fragrant perfume:

Before: At first we took a base reading of the environment. Violet colour indicates a certain amount of stress. As you can see there is less amount of yellow (which indicates positivity) in the centre of the frame and it is surrounded by violet. 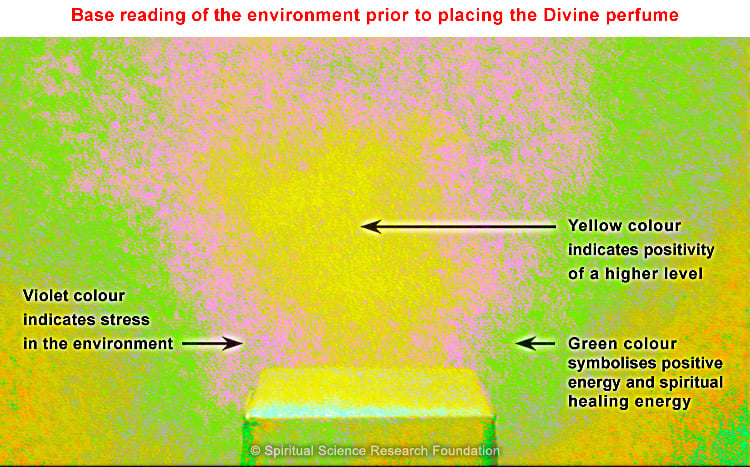 After: Then we placed the bowl containing fragrant perfume along with the glass container that it was placed in. The yellow rings emanating from the perfume pushed away the negative vibrations of violet colour and a yellow aura was formed around the container. 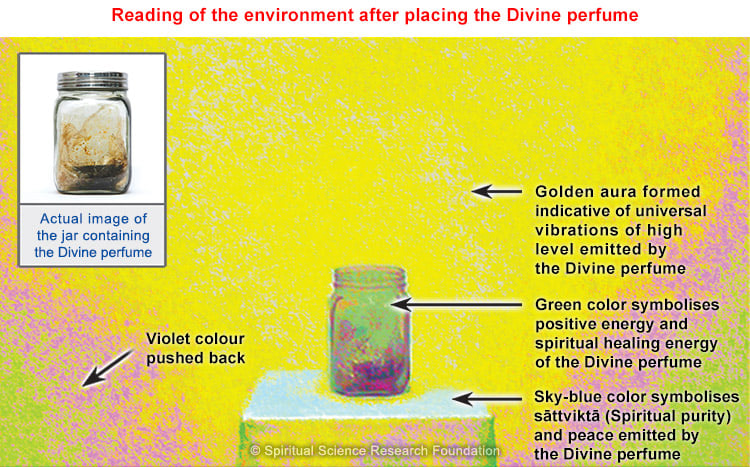 The ‘PIP’ biofield imaging method also depicted a very positive change in the environment due to the perfume. The sky-blue colour seen on the table (where the container of perfume is kept) is associated with high spiritual level. Similarly, the container containing the bowl of perfume has also turned green. In the PIP, green symbolises positive energy associated with spiritual treatment. It is clear from the above observations that the perfume created automatically in the bronze bowl used by H.H. Dr Athavale is of high spiritual level and it is spiritually beneficial. The above scan and analysis has been done with the help of Mr Santosh Joshi (Universal Energy Researcher, Mumbai, India).

SSRF appeals to scientists and experts in the field to join us in studying the various unexplained phenomena in the Spiritual Science Research Centre in Goa, India.