How Much Can We Perceive with Sixth Sense (Psychic) Abilities?

Quite often, we come across pictures or photographs on the Internet that have captured images of ghosts. These photographs provide a blurred glimpse into paranormal activity around us. The truth is that we are almost all the time impacted by ghosts (demons, devils, negative energies, etc.) whether we are aware of it or not. In some cases, the impact might be quite dramatic such as a possessed person behaving in a violent manner or an experience of being sexually assaulted at night by an unseen entity. In other cases, ghosts (demons, devils, negative energies, etc.) create problems in our lives in a very subtle manner such as financial or marital problems.

The capturing of paranormal activity on film or the ability to see an out-of-focus face of a ghost is just the tip of the iceberg in the understanding of the subtle-dimension. In short, it is a very superficial level of understanding, about the activity of ghosts. As our sixth sense (subtle perception ability) develops we begin to understand and perceive this activity in more detail along with why it is happening.

Let us examine the various progressively deeper levels of sixth sense (subtle-perception or psychic ability) with regard to this paranormal world of ghosts.

The diagram below shows the various levels of perception that one can have and the relative sixth sense ability we need to have to perceive it.

From the diagram above we will realise that that there are many levels of perception about an attack by ghosts. In order to perceive the various different levels of causative factors, we need exponentially increasing sixth sense or psychic abilities.

Some seekers doing spiritual practice under guidance of the Spiritual Science Research Foundation (SSRF), have such an activated sixth sense and can perceive and report the following details about ghosts and their activities. 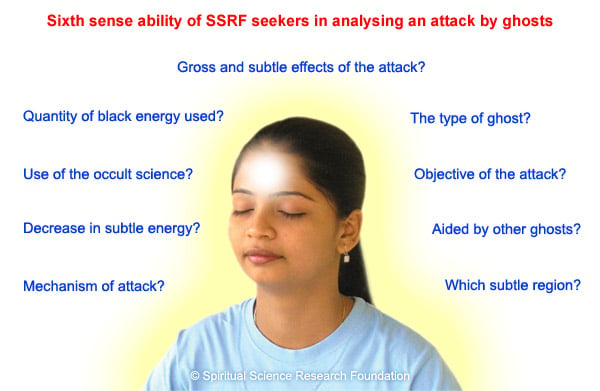 When many seekers, unknown to each other are asked to take a subtle reading of a single event, their readings come uniform across all the various variables as discussed above.

Only when we know the details of the attack and the attacking ghost, can we plan effective measures against them, like fight or flight.