If one types the keywords ‘spontaneous human combustion’ in a search engine on the Internet, one will find there has been much interest in how this phenomenon happens. There have been a number of theories floated around about it. While scientists have been sceptical about the phenomenon, there has been no foolproof rational explanation for it.

At SSRF, we also have encountered a number of situations wherein Deities’ and/or Saints’ pictures have spontaneously gone up in flames and seekers have woken up to find their bed linen in flames or they have found unexplained burns on their clothes and other items. For SSRF, too many independent cases of the same type have been reported  from geographically separate regions to dismiss this as mere coincidence. 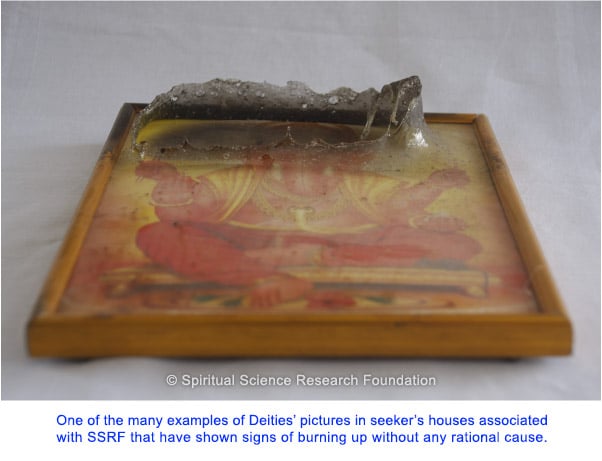 3. How do higher-level ghosts create spontaneous combustion or burns

It is documented that many times, victims of spontaneous human combustion burn-up almost completely while their surroundings, and even sometimes their clothes, remained virtually untouched. The victim is almost completely consumed, usually inside his or her home. Coroners at the scene have sometimes noted a sweet, smoky smell in the room where the incident occurred. What makes the charred bodies in the photos of spontaneous human combustion so peculiar is that the extremities often remain intact. Although the torso and head are charred beyond recognition, the hands, feet, and/or part of the legs may be unburned. Also, the room around the person shows little or no signs of a fire, aside from a greasy residue that is sometimes left on the furniture and walls. In rare cases, the internal organs of a victim remain untouched while the outside of the body is charred. Ref: science.howstuffworks.com

The following are our findings through spiritual research on the above observations around the phenomenon of spontaneous human combustion:

In this sub-section of Horrifying Supernatural Encounters at SSRF, we have provided a number of case studies to show various examples of how this phenomenon of spontaneous combustion takes place.