Note: To understand the background behind this case study and why these phenomena have been taking place especially to SSRF please read – An introduction to Horrifying Supernatural Phenomena.

When we came across this example of a hole appearing spontaneously in the picture of His Holiness Dr Athavale, through advanced sixth sense we recognised that it was created by negative energies. However it also gave us the opportunity to study the subtle battle that ensued between the attacking entity in the spiritual dimension and the spiritual positivity of H.H. Dr. Athavale.

2. Levels and descriptions of the subtle attack

2.1 First level of the attack

At one level of attack, we saw a demon (rākshas) attacking the picture using a skeleton-shaped weapon. A seeker from SSRF’s subtle department Mrs. Yoya Vallee drew what she saw through her advanced sixth sense of vision and has given us a visual glimpse of what actually transpired during the act. 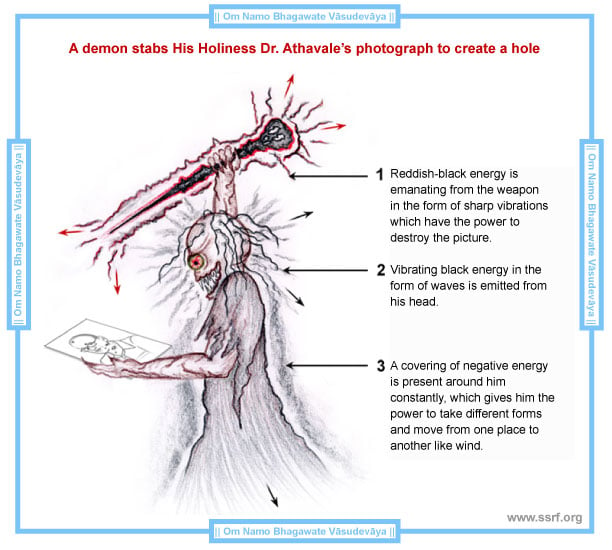 The above drawing based on subtle-knowledge is what Yoya saw with her advanced sixth sense of vision. In movie form she saw a demon-level negative energy holding a dagger-like lance. The top of the lance was skull-shaped where the eyes were plain sockets. The weapon had a reddish black colour subtle energy emanating out of it. This energy was used to create the hole in the picture. (Refer to arrow 3)

Yoya saw the entire demon’s form with an incredible amount of detail. The following is what she noted in her drawing based on subtle-knowledge:

Description of his arms

Description of his clothes

This drawing based on subtle-knowledge after going through a review process was found to have a truth percentage of 80%.

2.2 Second level of the attack

An even deeper level of the attack was perceived by another seeker from SSRF’s subtle department Mrs. Anjali Gadgil using her subtle-mind and subtle-intellect. The root entity behind the attack was a higher level subtle-sorcerer from the 6th region of Hell (Pātāl).  It was he who had dispatched the demon to carry out the attack.

In order to counter the positivity emitting from the photograph through the medium of subtle-sound, the subtle-sorcerer created a distressing sound by stabbing with the weapon at full force. In this way he tried to prevent the flow of Divine Consciousness (Chaitanya) from the photo and the attack was with the full intention of killing H.H. Dr. Athavale. This type of attack is akin to black magic or voodoo done on a photograph to harm the person in the photograph. The subtle-pressure in the environment around the picture increased.

As a result there was a reduction in the subtle-pressure in the environment.

2.3 Results of the subtle battle