Note: To understand the background behind this case study and why these phenomena have been taking place, especially with regard to SSRF, please read “An introduction to Horrifying Supernatural Phenomena“.

A Holy text is a book on the subject of Spirituality written or compiled by a Saint or spiritually evolved individual.

Here we present a case study that stands out due to the peculiar process of destruction used to disfigure the photograph. The disfiguration happened on a photograph of His Holiness Dr. Athavale, which is commonly found on the inner cover of Holy texts compiled by Him. In January 2006, scratches and stains suddenly appeared on the photograph found in one particular copy of a Holy text. 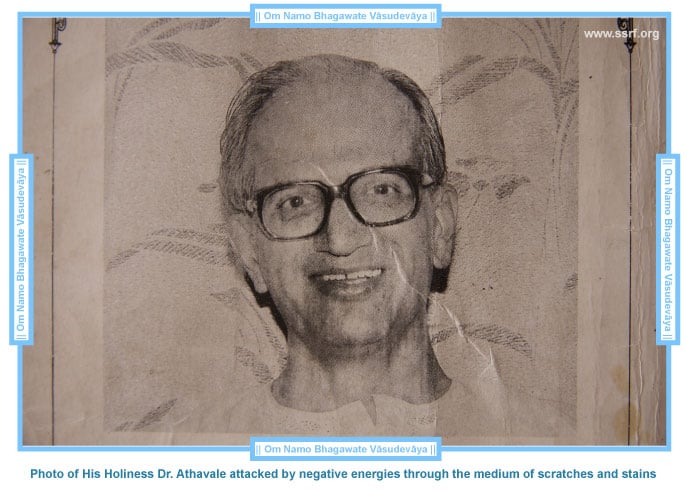 Through an advanced sixth sense reading, we found that the reason behind the scratches and stains on the photograph was an attack by a demon.

Note: We have drawn a protective border around the photograph so that readers do not feel distress while looking at it. This border increases Divine consciousness (Chaitanya) in the atmosphere, reduces the covering of black energy on the picture and the observer, and helps the observer obtain spiritual experiences.

2. Subtle analysis and mechanism of the attack

When Mrs. Yoya Vallee, a seeker with advanced sixth sense of vision, was asked to take a subtle-reading of the attacking entity, this is what she perceived: 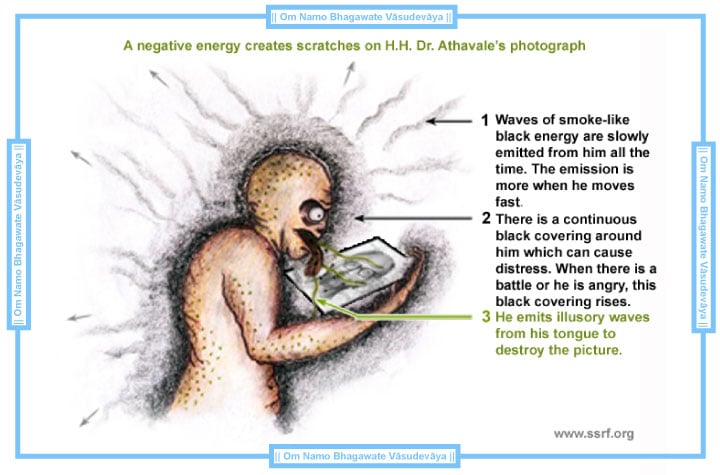 In addition to the above drawing based on subtle-knowledge, she perceived that for this particular attack, the demon was guided by a subtle-sorcerer (māntrik) from the 4th region of Hell (Pātāl).

Read more details about the features of the attacking entity perceived by Mrs. Yoya Vallee :

Subtle reading of entity that attacked photograph of H. H. Dr. Athavale (on the inner cover of a Holy text)

Date on which the picture was drawn by Mrs. Yoya Vallee : 19th January 2010

Distressing vibrations from the picture : 40 %

The sorcerer who is guiding him is from the 4th region of Hell (Pātāl).

1. Waves of smoke black energy are slowly emitted from him all the time. The emission is more when he moves fast.

He licked the photo forcefully and spread black energy into it.

3. He emits illusory waves from his tongue to destroy the picture.”]

A yantra is a subtle device or instrument. When negative energies create yantras, they place the yantras in the object or environment that they are attacking. As a result, black negative energy is emitted from these yantras.

3. The effect of the attack

According to Divine Knowledge received by Mrs. Anjali Gadgil, a seeker of SSRF’s subtle-department, the entire attack had a three-fold effect:

In addition, the attacking subtle-sorcerer was also adversely affected during the attack by the strength of the rays of Divine consciousness released from the photograph. His body was pulled towards the photograph, which burnt many of his illusory forms.