This case study defies all physical laws and is one of the more spectacular cases we have been witness to. While it is as dramatic as a scene from a fictional scary movie, it is a real life event that happened to one of the seekers, Mr. Nagnath Mulje in front of many other witnesses. Nagnath is a marketing executive for Ayurvedic Medicines in Karad, a small town in Maharashtra, India. As of 2010, he has been doing spiritual practice for the past 10 years and as part of his spiritual practice, he helps in the spread of spirituality by conducting spiritual meetings for SSRF. When he recently visited the SSRF research centre in Goa, we had the opportunity to interview him about his bizarre experience. The following is an account of the incident in his own words.

This is actually one of a few supernatural incidents that have happened to me. The incident happened in 2003 in the Karad ashram in Maharasthra, India. I remember getting up that morning feeling giddy and with my vision blacking out. I felt that the distress was due to a negative energy troubling me. I wanted to go for the morning ritualistic worship that is the Arati but was feeling too weak to change.

So I ended up going for Arti in my vest and pajama. Towards the end of the Arti, I began to feel tremendous heat on my back as if a fire was lit behind me. I was already feeling giddy, this just added to my discomfort and I remember collapsing and resting my back on the floor.

I told the other seekers that I felt as if my back was on fire. When they turned me around, they saw that there were some blood-like stains on the vest. They lifted the vest from my back but they could not see any wounds or lesions on my back that could have caused the blood stains. Then they pulled my vest back down and even as they watched, some more blood stains appeared. Then the strangest thing happened. Within 15 minutes of the blood manifesting, it began to turn black. 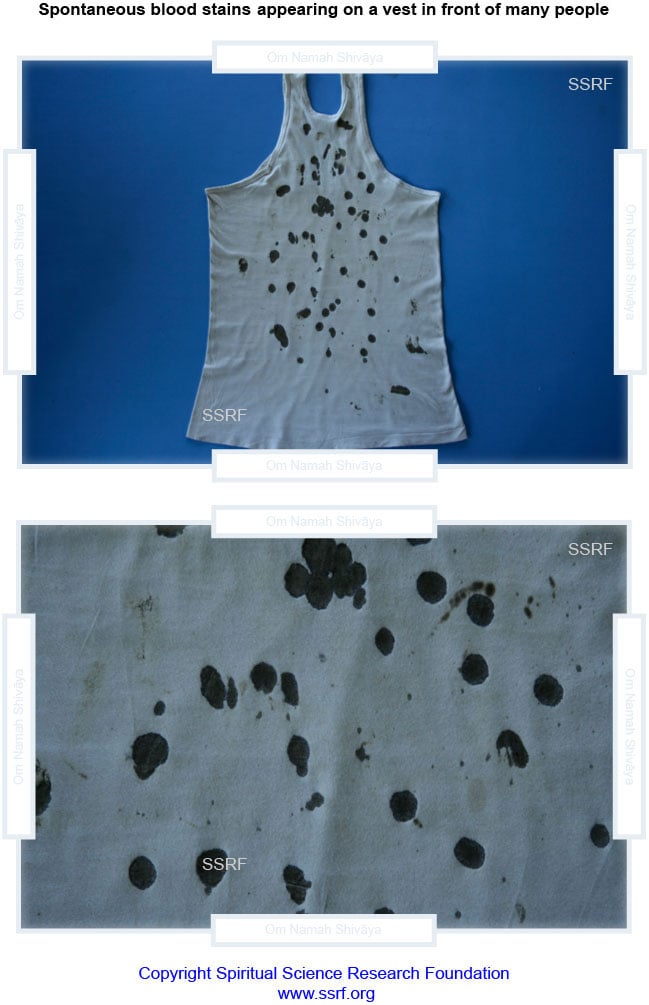 I did not go to a doctor at that time as we called a subtle department seeker of SSRF immediately afterwards and he confirmed our suspicions that it was indeed an attack by higher level negative energies. It was quite obvious to everyone there that this was something supernatural and that it defied all physical laws.

The SSRF research team asked Nagnath to take a blood test as recommended by our medical doctors. We asked our own resident doctors and an external doctor to examine Nagnath as to whether there were any medical signs that would explain this event. However they could not find any medical problem with Nagnath that could explain such an occurrence.

When the blood on the vest was tested by a forensic expert it was found to be human blood and the blood type was the same as Nagnath’s, i.e. AB +ve. However they could not tell us whether the blood was from Nagnath as it would entail DNA testing.

Through spiritual research we found the following facts: