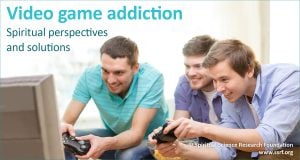 While there have been studies about the pros and cons of video games at a physical and psychological level – there have been little to no studies about the spiritual impact of them. However spiritual research conducted (using aura and energy scanners along with advanced sixth sense) indicates that most video games, in fact, have a negative effect on one’s aura even if played for just an hour. The research also shows that seemingly harmless video games that are meant for children or for pre-teens are spiritually disruptive. This negative effect multiplies exponentially when a person is addicted to video games. Prolonged exposure to negative spiritual vibrations eventually leads to negative side-effects at a physical and psychological level. However, the gamer (or parents of gamers) may not be able to tie it back to habits such as excessive video gaming as it not easily evident. The greater a person’s involvement with gaming, the more important it is to employ spiritual solutions such as chanting the Name of God and Autosuggestions to extract oneself from the clutches of this spiritually detrimental form of entertainment.

On 9 November 2010, a first-person shooter video game known as ‘Call of Duty: Black Ops’ was released. 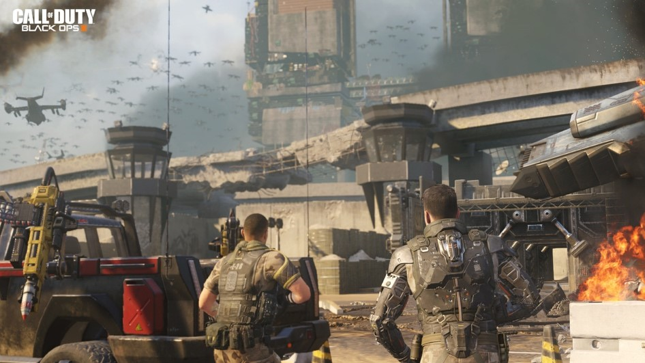 One month later, by Christmas Eve, it had been collectively played for more than 600 million hours, which is the equivalent of more than 68,000 years of human time.

Video games have grown massively in popularity over the past few decades, and they have definitively moved into mainstream culture. As parents, you may have come home and seen your kids playing a violent video game, for example shooting zombies in Zombie Hunter. 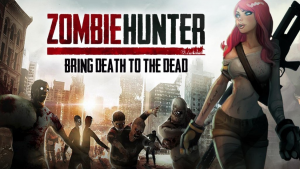 At that time, you may have thought – “Is shooting zombies the best use of my child’s time – why can’t they go out and play like how we used to as kids ?” There are many of us who have heard about the dangers of video games and we worry about our children.

Today, two things are clear. Video games are here to stay, and yes, they do consume a good deal of people’s time.

The question on most parents’ minds is – Should I allow my kids to continue playing video games ?

Some studies have shown that playing video games increases eye-hand coordination, problem-solving skills and the brain’s ability to process information. But as with anything, too much of it turns into an addiction and then has physical and mental health ramifications. The World Health Organization (WHO) even recently classified video game addiction as a mental health disorder. However, there is hardly any discussion about the spiritual effect of video games at the spiritual level.

In this article, we have shared our research findings of how video games impact us at a spiritual level.

3. Experiment to study the effect of video games on one’s aura

This experiment was conducted at the Spiritual Research Centre and Ashram in Goa, India. The Universal Aura Scanner (UAS) was used to study the change in aura of a person after playing video games.

A. About the sample of seekers taking part in the experiment

B. Instrument used for the experiment

The Universal Aura Scanner (UAS) was used to analyse the effect of playing video games on the seekers participating in the experiment. Before and after readings of the participating seekers were taken using the UAS Scanner.

The UAS is an instrument developed by Dr Mannem Murthy (a former nuclear scientist) and is used to measure the subtle-energy (positive and negative) and the aura around any object (living or non-living). UAS readings give data about the negative aura, positive aura and the measured aura around the object being measured. Please refer to the article on – the Methodology of UAS readings to learn more about how UAS readings are taken and what they mean. 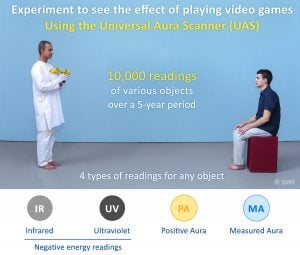 There are 4 types of UAS readings which are described in the table below :

The research team has used this instrument extensively, i.e. something like 10,000 readings of objects over a 5-year period have been taken, and it has been observed that the UAS is quite accurate and corroborates with the readings obtained through sixth sense.

We asked five subjects (who were seekers at the Research Centre) to play a first-person shooter (FPS) video game for just an hour and a UAS reading was taken of each subject before and after playing the video game. The effect of playing video games on the auras of seekers can be seen below. 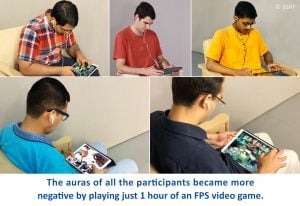 The key findings were

One may argue that a first-person shooter video game is quite violent and would obviously have had a negative effect.

To investigate this further, the team conducted a pilot study on two boys aged between 10 and 12 to study the impact of other types of video games generally used by younger children. 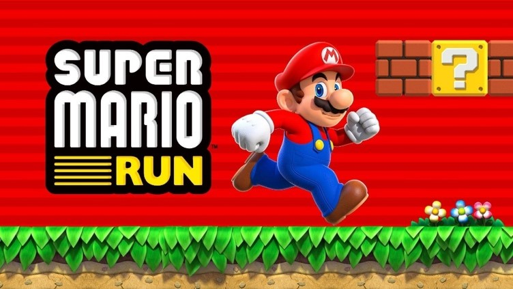 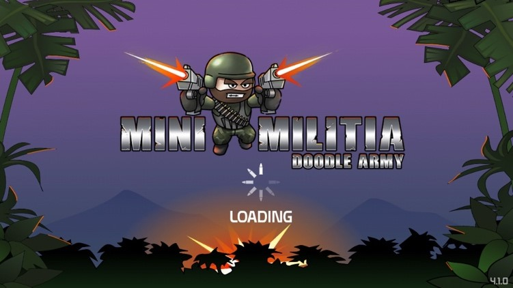 One played a game called ‘Super Mario Run’ and the other ‘Mini-militia’ – these are games typically played by children. While these games may seem quite normal and harmless, what we found is that these children’s video games had the same negative effect as the FPS on the children-participants’ subtle energy and auras.

3.5 Personal experiences of the participants when playing video games

The results of the experiment show that all the seekers who played video games got affected negatively.

However, as all the participating seekers have been doing spiritual practice for some years, they were able to perceive (to some extent) the subtle vibrations at play during the experiment. Here are some of the effects they perceived :

In the case of an average person, the effects may not be immediately apparent, but show up long term in the form of an increase in negative thoughts, low energy levels, etc. One may argue that FPS shooter games are more violent so they would tend to have a more negative effect on one, but children’s games showed the same negative effects on the participants’ auras. Modern science has been unable to pick up this effect due to a lack of understanding of the spiritual dimension. However, from a spiritual perspective, video games bring about a black covering around the mind and intellect and divert one from making efforts in spiritual practice.

4. What does a person playing video games look like in the subtle ?

A true measure and analysis of subtle vibrations can only be through the medium of sixth sense. We have seekers in our spiritual research team who can actually perceive the vibrations emitted by people. By drawing them, they serve as spiritual X-rays and provide clarity about the true nature of such media.

This is a picture which shows what happens in the subtle when an average person is engaged in playing a video game. All the subtle vibrations involved with the event are displayed. It was drawn by His Holiness Dejan Glescic (a Saint from SSRF), who used to play video games earlier on. Due to spiritual practice, he was able to gain insight into what was happening in the subtle while playing video games. 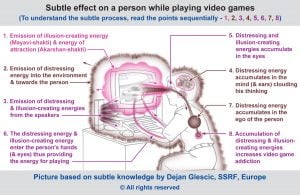 The above subtle drawing shows that one imbibes a high amount of subtle distressing energy by playing video games. Of particular concern is the illusion creating energy (also known as Mayavi energy) that the player gets affected by, because this type of energy gives one a false sense that something is good when it is actually not. The average person would not be able to immediately perceive the subtle negative effect of these vibrations, but they would be insidiously affected over the course of time in the form of symptoms such as negative thoughts, lack of motivation and even an increased risk of possession.

“In September, this year (2013) my spiritual distress increased, and the desire to play video games came back though I had not played them for a long time. I played games for a couple of days. During this time, I really did not want to play them, but I felt like I had no control over myself. I had a desire from within to finally overcome this problem and I made a prayer to God to help me understand deeply from within how video game addiction impacted me. Within a few minutes I started getting an inner realization and I could see what kind of energy is emitted from the games and imbibed in the body and the mind.

Also, it felt that at this moment God reduced the impression of liking games in the like and dislike centre in my mind. From this moment on, instead of liking, I started disliking video games.”

We understand that video games are a way to relax and reduce stress or to distract the mind. The pull that they have on us is very real and this can make it very difficult to stop. However, what this study shows is that no matter what life stage you are in, playing video games invariably has a negative effect. Hence, it is important to reduce the time spent on video games. Parents would also find it in the best interest of their children to help them reduce time spent gaming.

Given ahead are some spiritual solutions to overcoming the urge to play video games.

Note : Incorporating spiritual solutions are most necessary especially when there is an addiction to video games. This is because most addictions have a spiritual component which can only be overcome by spiritual measures.

Repeat either of the following chants.

One should chant for up to 3 hours daily depending on how strong the urge to play is. The chanting can be done by sitting down in one place and with concentration to get better results. The duration of 3 hours can be split up into smaller durations as per how one is placed for time.

Autosuggestions (AS) help to overcome the impressions in the subconscious mind. So, the thoughts about wanting to play video games reduces by giving AS. Two AS have been given below and either of them can be used. You can select the one that resonates most with you.

Autosuggestion 1 : Whenever I want to play video games, I will realise that I am looking for this distraction because of some stress. I will take help to identify it and resolve it in a mature and constructive manner.

Autosuggestion 2 : Whenever I want to play video games, I will become aware that doing so is detrimental to my mental and spiritual well-being, so I will focus on chanting the Name of God / cleaning my house / planning the next project for work / spending time with my child / completing my studies.

Video games are like any other form of entertainment – but how we use it and what type of content we engage with will define whether it has a positive or negative impact on us. Unfortunately, in today’s world, the vast majority of video games emit negative vibrations. The reason we play games is for entertainment and because it gives us happiness. However, the happiness we seek out should be sustainable, which is not the case with video games. Many gamers can attest to the fact that one often experiences an empty feeling after playing video games for long hours. Chanting the Name of God creates positivity and stability in the mind, which reduces our need to run after addictive stimuli.