1. The spiritual effect of celebrating Gudi Padwa at the Spiritual Research Centre and Ashram in Goa, India

There was feeling of peace and calmness in the air at the Spiritual Research Centre and Ashram as the first light started to push the darkness away, preparing us for another sunrise. The distinctive sound of the koel (cuckoo bird) could be heard ricocheting through the surrounding fields and forests as the sun emerged from behind the hills like every other day.

However, this sunrise was special.

It signified the start of the New Hindu Lunar year popularly known as Gudi Padwa. It is a festival that is celebrated in various part of India and is also associated with the coming of spring. As the first sunrays filtered through the trees and mist, and touched the Spiritual Research Centre and Ashram, the celebrations of Gudi Padwa commenced.

The environment looked very festive with seekers dressed in colourful traditional attire and garlands of flowers adorning the doorway. Along with the festivities, seekers attending the celebrations said that they could easily perceive the heightened level of Divine consciousness (Chaitanya) and spiritual healing vibrations around them. The sound of Sanskrit mantras filled the air and fragrance from lit incense sticks drifted around; it was hard not to feel the sanctity of the ceremony. Looking around, one could see some seekers in a meditative state and others in a state where their spiritual emotion had started to awaken.

Among the seekers present at the Gudi Padwa celebrations was the same group of seekers who had attended the New Year Celebrations on 31 December 2018 – 1 January 2019. They had done so as part of the research team’s study to understand the subtle effect of the usual New Year celebrations. SSRF had earlier published the findings in relation to the spiritual effect of New Year’s.

As the way Gudi Padwa is traditionally celebrated is in stark contrast to the manner in which New Year’s is celebrated, the spiritual research team was curious to know the difference in their spiritual impact. Accordingly, SSRF and the Maharshi Adhyatma Vishwavidyalay (MAV) conducted a follow-up study on the subtle effect celebrating Gudi Padwa in a traditional manner and the results are given below.

2. Background about the Maharshi Adhyatma Vishwavidyalay 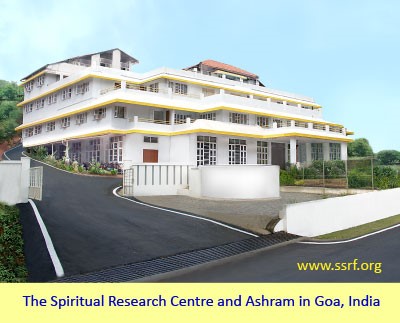 The Maharshi Adhyatma Vishwavidyalay (also known as the Maharshi University of Spirituality or MAV) is situated in Goa, India. The Maharshi Adhyatma Vishwavidyalay and the Spiritual Science Research Foundation are non-profit organisations run by volunteers from all over the world who are dedicated to a common goal, which is spiritual progress and the pursuit of truth. One of the key goals of both organisations is to assess and evaluate how our decisions and daily routines affect us at the spiritual level. To this end, their research teams jointly carry out various experiments and research projects at the Spiritual Research Centre and Ashram in Goa, India. As of 2019, the spiritual research team at the Maharshi University of Spirituality has 38 years of spiritual research experience.

3. Experiment to study the effect of celebrating the New Year on Gudi Padwa

A. About the sample of seekers taking part in the experiment 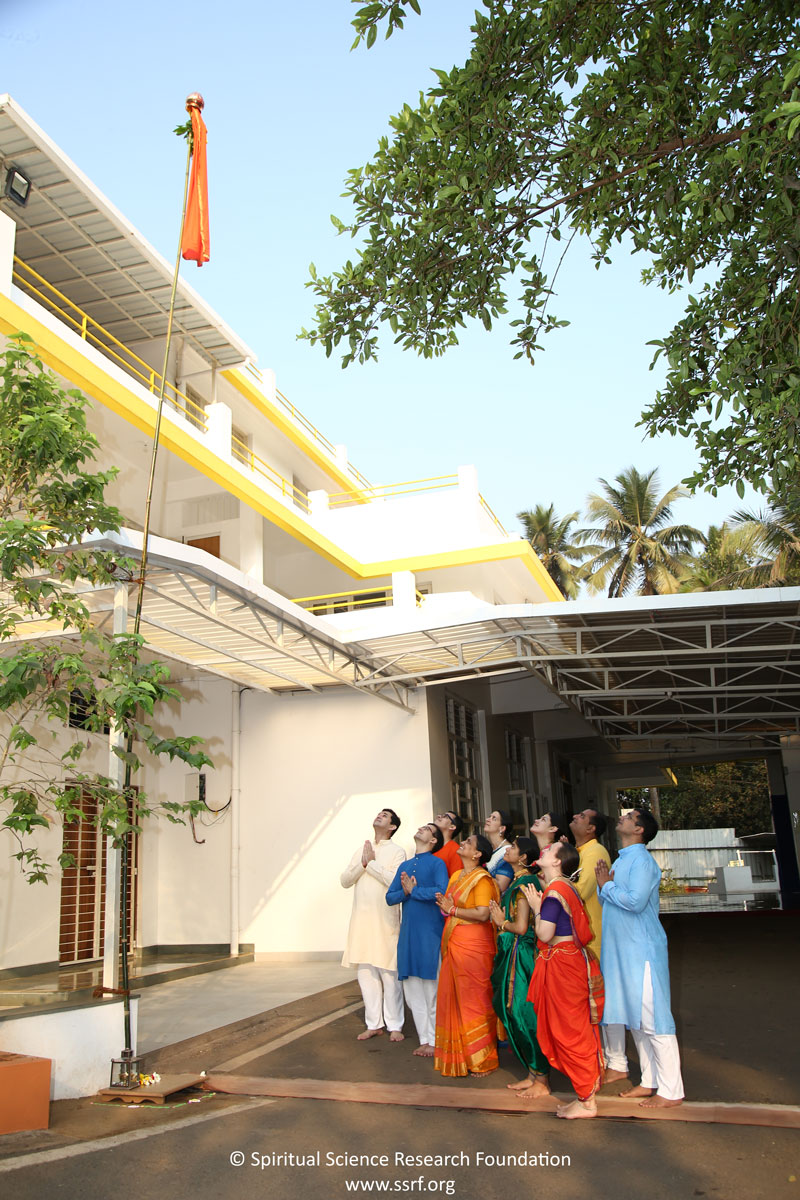 The reason that both segments were chosen to be represented in the sample is that a large proportion of the world’s population suffers from spiritual distress and it was important to understand the difference of the effect of celebrating Gudi Padwa on both segments.

Caption for image : Seekers paying obeisance to the ritualistic Gudi that had been hoisted. A Gudi is a ritualistic symbol for Righteousness.

B. About the instrument used for the experiment 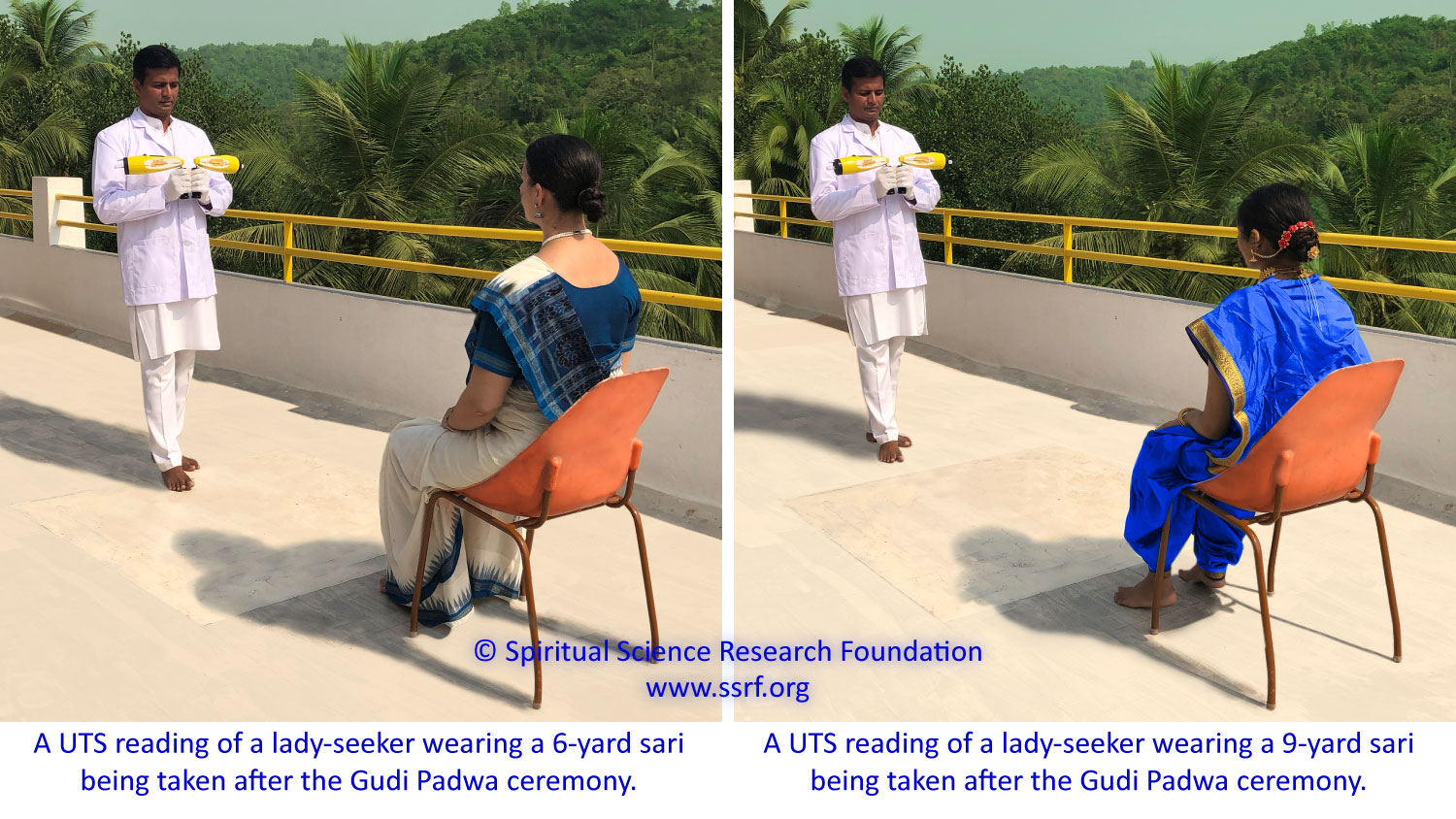 The UTS is an instrument developed by Dr Mannem Murthy (a former nuclear scientist) and is used to measure the subtle-energy (positive and negative) and the aura around any object (living or non-living). UTS readings give data about the negative aura, positive aura and the measured aura around the object being measured. Please refer to the article on – the Methodology of UTS readings (coming soon) to learn more about how UTS readings are taken and what they mean.

C. About the readings and the sequence of events

There are 4 types of UTS readings which are described in the table below :

The research team has used this instrument extensively, i.e. something like 10,000 readings of objects over a 5-year period have been taken, and it has been observed that the UTS is quite accurate and corroborates with the readings obtained through sixth sense.

All the UTS readings of the participants became significantly more positive after the Gudi Padwa celebration.

Please note about the New Year’s (31 Dec – 1 Jan) – As of 1 May 2019, the after-celebrations readings are the highest levels of negative IR and UV auras that have been detected by the UTS on a person by the spiritual research team. This indicates the severity of the spiritual impact that the experiment had on participating seekers, and therefore indicates the severity of the effect of New Year’s celebrations on society.

From the above table, one can see the very different effects that both celebrations had on the participants. In the case of the seeker-participants due to their spiritual practice, they were able to recover from the spiritual negativity of the readings of New Year’s Day celebrations within a couple of days. For the average person though, the effect may linger for days, if not weeks. If spiritually average people are repeatedly exposed to such negative stimuli, the negativity in their auras may not recover at all.

Another observation made was about lady-seekers’ attire. It was observed that amongst the lady-seekers who were afflicted with distress, those who wore a 9-yard sari were more positively affected by the Gudi Padwa ceremony as opposed to those wearing a 6-yard sari. This indicates that when lady-seekers wear 9-yard saris for auspicious occasions, they are more likely to be able to benefit from the positivity in the environment due to the spiritual positivity of their attire. In a separate experiment it was found that the 9-yard sari, when worn in the correct manner, is the most positive attire for women.

4. Comments from seekers taking part in the experiment

The seeker-participants in the experiment were asked via a survey as to how they felt before, during and after the Gudi Padwa ceremony. They had been asked previously about their experiences during the New Year’s Eve party they attended in a separate survey. Owing to their background of regular spiritual practice, their sixth sense ability is awakened, and they are therefore able to perceive the subtle vibrations that are present while attending such events. 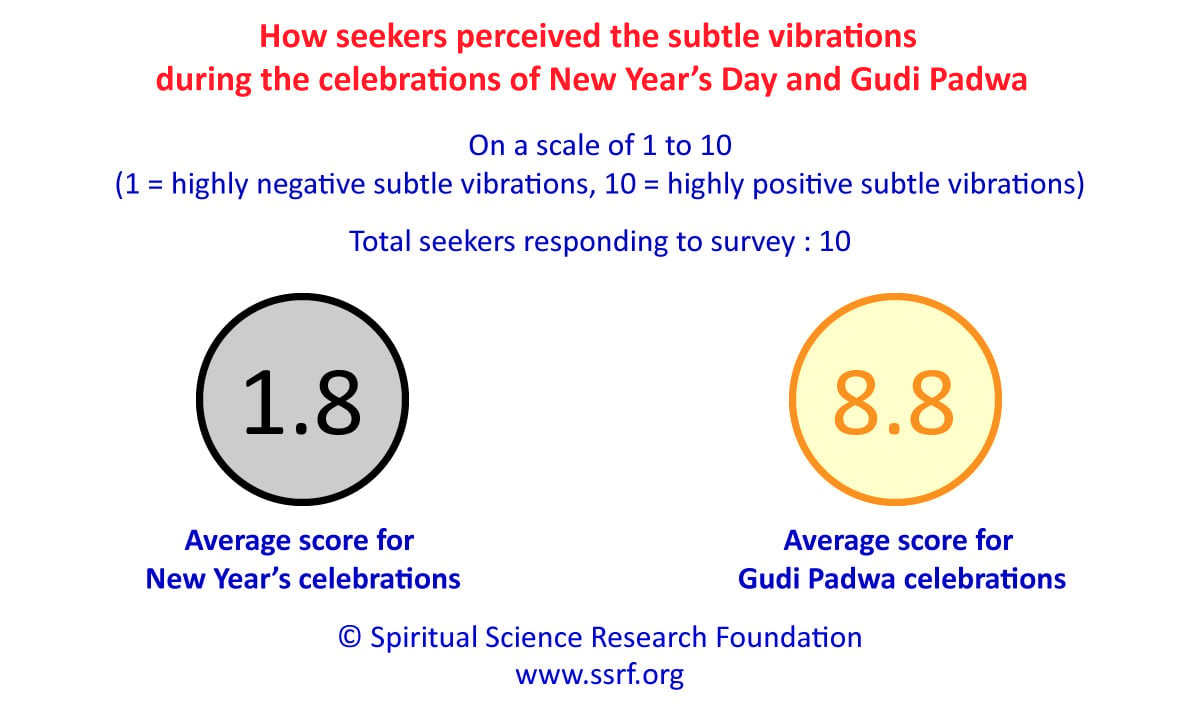 A summary comparison of their experiences while attending the New Year’s Eve party and the Gudi Padwa ceremony is given below.

From the above, a clear picture emerges of the difference between the two ways of bringing in the New Year at a spiritual level. Some comments of seekers related to how they felt when comparing these two celebrations are given below.

5. Some differences between New Year’s and Gudi Padwa

For those of us who attend New Year’s Day celebrations, we rarely think of the spiritual repercussions. We attend such events because it is the norm and we never really question the status quo.

Just as people plan parties and events on New Year’s Eve, through spiritual research it has been found that negative energies too plan for New Year’s Eve so that they can take maximum advantage of people to further their control on society.

According to the National Insurance Crime Bureau, USA, the holidays feature some of the highest numbers of car thefts for the year. The top offender is New Year’s Day, but New Year’s Eve also ranks for an increase in auto theft (nicb.org, 2018). There is a spike in other crimes such as domestic violence, drug possession, public intoxication, drinking and driving, violence, etc. For example, the New South Wales (NSW),  Australia Bureau of Crime Statistics and Research stated that the number of domestic assaults recorded by the NSW Police on New Year’s Day is the highest all year (bocsar.nsw.gov.au, 2018).

The above points put into perspective the two types of celebrations on New Year’s Day. Actually, if one thinks a little deeper about the above points, one may question the absurdity of the choice of this arbitrary date and time to celebrate New Year’s Eve and Day. Having any auspicious celebration or event at midnight is invariably undermined by the negative vibrations in the environment. Another worrying trend is that nowadays it is the norm for the younger generation to party through the night in dance clubs every weekend. What they do not realise is that they would be adversely affected to a greater degree than the seeker-participants in the New Year’s experiment. As it happens repetitively, the chance of recovering from the negativity is unlikely. This would lead to deleterious long-term effects at the physical, psychological and spiritual levels.

The purpose of life is to grow spiritually or at the very least one should try not to increase the spiritual negativity in the environment, which directly impedes the spiritual growth of society. Ideally, New Year’s Day should be a day that one reaffirms one’s resolve for spiritual growth whilst expressing gratitude to God for His blessings in the year gone by.

New Year’s celebrations such as partying through the night (given its worldwide adoption as a form of celebration) drastically increase the negativity in the environment in manifold ways and hence severely impact society at a spiritual level. Unfortunately, due to the inability to sense subtle distressing vibrations, society continues to celebrate New Year’s in such a manner oblivious to its dark side.

Depending on the culture, the date on which New Year’s Day is set may vary. From a spiritual perspective, any such celebration should not be around midnight or after sundown but early in the morning. Only if celebrations are geared towards spiritual progress (as per Universal principles) or spiritual positivity will positive vibrations be emitted and society benefitted.