At Christmas time, it is hard to miss the warm and fuzzy feeling that the festive season brings with it and Christmas carols play a significant role in setting the joyous feeling. In homes all across the world, Christmas carols fill the air while families set up their Christmas trees and perform other activities in preparation for Christmas. It is a time where Christmas carollers go from street to street in every neighbourhood bringing it to life with their music. Choirs and congregations at churches sing carols in honour of Jesus Christ’s birth. Right on cue, come the month of December, malls and shopping centres ensure that the festive spirit is alive and well as piped music of Christmas carols is played in their premises hoping to gently persuade shoppers to spend more during the festive season.

At the outset before we answer this question, we would like to take a moment to introduce the organisations involved in this research.

2. Background of spiritual research in music 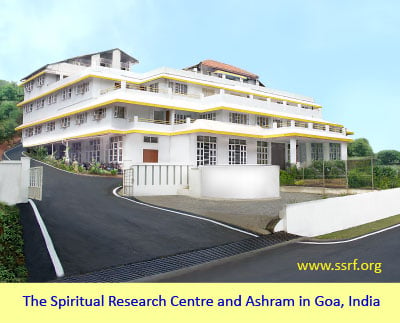 The Maharshi Adhyatma Vishwavidyalay (also known as the Maharshi University of Spirituality or MAV) and the Spiritual Science Research Foundation are non-profit organisations run by volunteers from all over the world who are dedicated to a common goal, which is spiritual progress and the pursuit of truth. One of the key goals of both organisations is to assess and evaluate how our decisions and daily routines affect us at a spiritual level. To this end, their research teams jointly carry out various experiments and research projects at the Spiritual Research Centre and Ashram in Goa, India. The spiritual research team at the Maharshi University of Spirituality has 37 years of spiritual research experience. 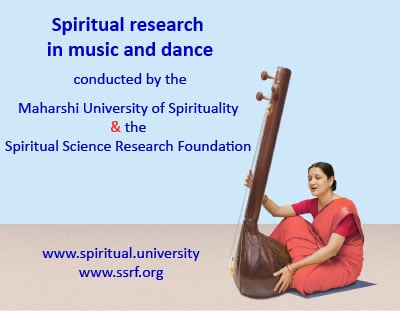 This research includes understanding the subtle effect of music and dance and it has been one of the key aspects of our research. We have a music department that conducts various experiments on a daily basis to understand and differentiate the subtle effects of music, the sound from various musical instruments and the impact it has on the environment. The research has been carried out using aura and subtle energy scanners along with the advanced sixth sense of seekers in the spiritual research team to assess and evaluate music from a spiritual perspective. The aim is to understand how musical compositions can be made in a way so as to emit spiritually positive vibrations regardless of culture and diversity.

The epitome of music (that emits spiritually purer vibrations) should be devotional songs which include hymns, Christmas carols, bhajans, shlokas, etc. However, in practice, this is not always true as there are a number of factors which influence the spiritual purity of a musical composition. To gain further insight into these factors, we have conducted numerous experiments in music. In relation to devotional music, particularly Christmas carols, two such experiments are provided below. 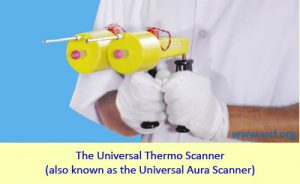 The Universal Thermo Scanner (UTS) (also known as the Universal Aura Scanner) was used to take readings of both the singer and selected audience members. The UTS is an instrument developed by Dr Mannem Murthy (a former nuclear scientist) and is used to measure the subtle-energy (positive and negative) and the aura around any object (living or non-living). UTS readings gave data about the negative aura, positive aura and the measured aura around the singer and audience members. Please refer to the article on – the Methodology of UTS readings to learn more about how UTS readings are taken and what they mean (Coming soon).

In contrast, when performing in front of seekers who had spiritual distress, the negative auras of both the performer and the audience increased in five of the genres. The only exception was the genre of Christmas carols where the performer’s aura became more positive, but the aura of the seekers with spiritual distress who were listening to her became more negative. Please refer to the diagram below for a summary of the results of the subtle effect on both the performer and the audience. 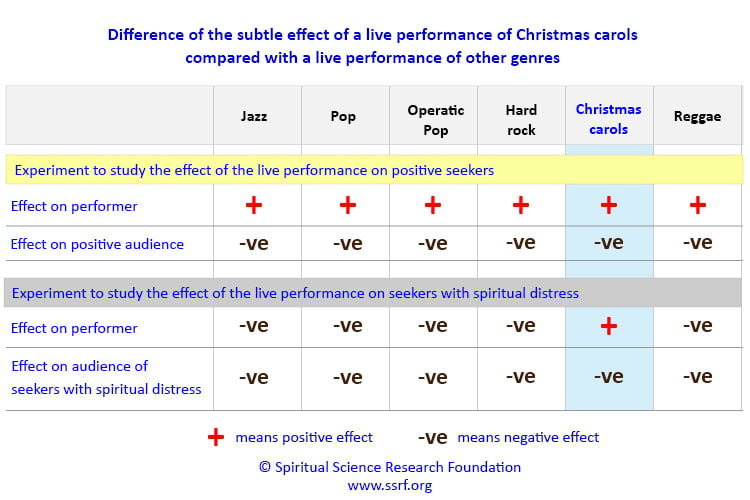 Sixth sense readings : Both sets of audiences, as they were seekers, had subtle ability and through their sixth sense, perceived negative vibrations being emitted from the performance. These sixth sense readings were corroborated by the UTS readings. One of the seekers in the spiritual research team perceived that the musical composition and the negative energy in the performer were actually emitting negative black energy through the performance, thus affecting the audience adversely.

Interestingly, (unlike with other genres) the singer’s negative aura actually reduced after singing not only in front of positive seekers, but also in front of seekers with spiritual distress. It was found through an advanced level of sixth sense that the reason for this was that the singer’s spiritual emotion (bhāv) was awakened while singing due to her feeling God’s presence through the meaning of the lyrics, and this had a positive effect on her aura. So, having spiritual emotion helped the singer spiritually at a personal level.

Key finding : This shows the importance of spiritual emotion in providing spiritual protection to any singer even though the devotional musical composition may emit negative vibrations.

These findings were quite shocking, especially in relation to the possibility of Christmas carols adversely affecting the audience at a spiritual level and this raised some questions, which have been listed below.

With these questions in mind, the spiritual research team carried out another experiment in relation to the subtle effect of Christmas carols.

The purpose of this experiment was to understand the subtle effect that choirs in churches and other performers singing Christmas carols had on audiences that :

The reason we chose two types of audiences is because it has been observed that where people suffer from spiritual distress it can significantly influence both the performer and the audience. Spiritual research has shown that up to 80% of the world’s population is affected by spiritual distress.

4.1 Readings taken with the UTS

4.2 Survey feedback from seekers after viewing the Christmas carol videos

When viewing the Christmas carols performed by church choirs and professional singers,

In addition to the above, the following are some comments made by the seekers in the audience when viewing the Christmas carol videos.

In the above two experiments, we saw that Christmas carols had a significant negative impact on the audience. Why was this so ? After undertaking spiritual research, as to why the readings were so negative even though it is devotional music, we obtained the following Divine Knowledge.

Sound (naad) and music are derived from the Absolute Ether Principle (Akashtattva), the most powerful and subtle of the five cosmic principles. Hence, they have the ability to create subtle vibrations that can have a significant impact on the musician, the audience, the musical instrument and the environment. SSRF and MAV are conducting in-depth spiritual research into music and some of the preliminary findings are given below which are relevant to devotional music too.

In the videos of Christmas carols that were played, it was observed that some of the artists were actually looking for appreciation. When one sings a devotional song with this intention, then the vibrations will invariably be negative.

Spiritual emotion for God is a key ingredient that helps to generate positive vibrations especially in any performance of devotional songs. However, it was observed that the singers in the video were more interested in performing and entertaining the audience as opposed to being in a state of spiritual emotion or communion with God or the Divine. Being able to hit the high notes and show off one’s musical skills do not equate to positive spiritual vibrations. In the case of the first experiment, we saw first-hand how a performer even though she was suffering from spiritual distress, positively benefitted due to her spiritual emotion. This is even though the music itself was emitting negative vibrations. This shows the importance of singing with spiritual emotion for God.

3. The lyrics : The lyrics of devotional Christmas carols have more positive spiritual vibrations as opposed to non-devotional ones.

Out of the two, lyrics versus the musical composition, the way the music is composed has a greater influence on the subtle vibrations emitted by the performance. Lyrics or words are at the level of the Absolute Fire Principle while the musical composition is at the level of the Absolute Ether Principle. The Absolute Ether Principle is subtler than the Absolute Fire Principle, and therefore more powerful. So, even if the words have been written in a spiritually pure manner, if the accompanying music is not spiritually pure, it will mostly emit negative vibrations.

5. Musical instruments : Amongst the three types of instruments, i.e. wind, string and percussion, it was found that the sound from wind instruments such as the Indian Bansuri (flute) made of bamboo emitted the most positive subtle vibrations. When the spiritual research team listened to some of the Christmas carols, it felt as if the accompanying music had an operatic and dramatic feel to it. This generated negative vibrations from the performance.

6. Use of props, clothing, etc. : Everything has the potential to add or subtract from the positivity that devotional songs are meant to deliver. This includes aspects such as the clothes of the performer, their hairstyle, the design of the stage and the sets, the premises where it is being sung, etc. For example, some of the carol singers were holding candles. Flames from candles made from paraffin wax or even beeswax emit negative vibrations. Having hundreds of such lit candles infect the environment with their negative vibrations. Another example is when performers wear black. Black is the most spiritually impure colour and it increases negative energy distress in the performers and attracts distressing vibrations towards them. Unless attention is paid to such details, they can end up compromising the spiritual positivity of the performance.

We live in a world where materialism is rife, and everything is geared to appeal to our senses. This ethos has unfortunately permeated into even religion and Spirituality, which are meant to be pathways for people to transcend materialism and seek the Divine. As a result, spiritual practices such as the singing of devotional songs like Christmas carols are more often about entertainment than remembering the true spiritual purpose of the festival. The performers themselves do not undertake spiritual practice and hence invariably emit negative vibrations from their performances even though their singing enthrals the audience.

The findings in the above article may be hard to believe for some but this is the actual state of the world in relation to devotional music such as Christmas carols. Most people are unable to understand this due to a lack of an activated sixth sense, which is needed to perceive the subtle vibrations from a performance. Only when one’s sixth sense gets activated through spiritual practice, will one be able to truly understand and experience the research about devotional music presented in this article.

As per the science of Spirituality, music is meant to be used by a devotee as a medium to grow spiritually towards God. Yet in today’s world, this sacred and ideal concept about music is hardly known, let alone practised. Growing spiritually through music is only possible when the performer undertakes regular spiritual practice under the guidance of a spiritually evolved guide (Guru). With this, he is able to understand the spiritual aspects of music and how to truly perform with devotion so that both he and the audience benefit spiritually from his performance.