A jākhin is the fifth in the hierarchy of ghosts in ascending order as per their spiritual strengths. Its relative spiritual strength is 1000. (Refer to the article on ‘Types of ghosts’). Even though its spiritual strength is the same as that of the Female goblin (haḍal), we have still put it higher in the hierarchy of ghosts. This is because the Female goblins work under jakhins. About 2% of the world’s population is affected or possessed by them in the present times right up to 2025. Considering that by percentage, relatively less people in the world are affected by them, we have given only a brief list of its salient features. 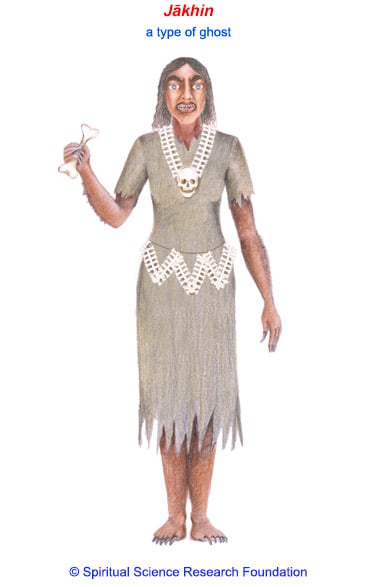 Please note that this is just a rough guideline as ghosts can take on any form depending on what they are trying to achieve.

Note: The spiritual level of the spiritual healer has to be at least 20% more than the ghost affecting or possessing the person he is trying to heal. When one is treated with external spiritual remedies one feels better for a while. However to get rid of this distress (which in many cases follows us from many past births) permanently, it is important to do spiritual practice. This helps to generate from within oneself, a continuous and lasting positive spiritual energy. Thus one is no longer dependant on external sources of healing energy. Only then is it possible to get a permanent cure.