Elizabeth is a successful young woman of 27 years, with a good track of career in research and development. Throughout her life she has been experiencing periods of mild to medium depression approximately 6 times a year. She did not have an explanation for the depression. The following is an account of the depression that she was facing, in her own words.

“I come from a very good family. My parents had taught me to become self-reliant from an early age so as not to depend on them. Whenever I was studying they would impress upon me that whatever I was doing, I was doing for myself only. This taught me to be responsible. As a result the grades I gained in my school years were always above average.”

“I started working during my studies and managed these two obligations simultaneously with ease. I excelled in my work life too and soon was offered a permanent role. After becoming financially independent, I was able to pursue interests such as furthering my language skills, undertaking unusual sports and travel. However even though externally I projected a successful image, internally I was prone to bouts of depression, which affected me at least 6 times a year for a duration of approximately 6 weeks at a time. When I tried to introspect as to what was causing the depression, it was only in some cases, I was able to pin-point the reason. Also in some cases, incidents in my life would impact me to a very large extent. For example, in my school years my friends stopped talking to me for many months with no apparent reason. Another example was when one of my boyfriends left me, causing a state of depression that lasted for over eight months. In another case, depression was caused due to an expectation of how my boss at work should be. I became accustomed to live with these bouts of depression, where in most cases I did not know the causes. Although I had everything in life, I still felt it was not complete as I was suffering from bouts of depression.”

Then one day, one of my friends introduced me to the Spiritual Science Research Foundation (SSRF) under whose guidance she had been practising Spirituality. The concepts in Spirituality that were taught were truly universal and they intrigued me. I too commenced spiritual practice and shortly after in May 2002, I travelled with my friend to the SSRF hermitage (ashram) in Goa, India to learn more about Spirituality, little knowing that they would provide me with an answer to my bouts of depression.

When Elizabeth arrived at the hermitage, she had the opportunity to undergo a spiritual diagnosis and treatment session conducted by a higher level Saint. Later, Elizabeth reflected, “During the spiritual diagnosis and treatment session in Goa, I learnt that I was possessed by a ghost (demon, devil, negative energy, etc.), which started manifesting itself visibly during the treatment session. For the first time, I was also made aware that the ghost (demon, devil, negative energy, etc.) possessing me was the cause of my unexplained bouts of depression.”

This is a photograph of Elizabeth during this diagnosis and treatment session. Note the peculiar ‘chin up, mouth open’ posture, totally uncharacteristic of Elizabeth. 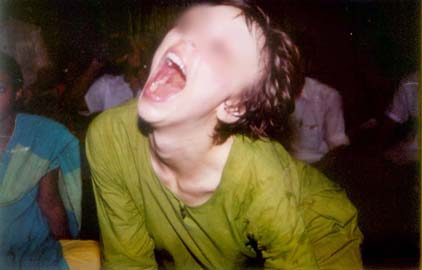 It was only after this spiritual diagnosis session that the ghost (demon, devil, negative energy, etc.) in Elizabeth was exposed and started manifesting in this form. Till then its distress was apparent only in the form of depression.

“During the manifestation I would feel a bloating of the chest and throat area (later I learnt that, that is where the serpent, i.e. the ghost (demon, devil, negative energy, etc.), was located in my body). My mouth would also become wide open and an entity would often speak through my mouth. All these symptoms would reduce when the manifestation stopped.

So what was the root cause of Elizabeth’s mental disturbance?

According to the science of Spirituality, the spiritual root cause of any difficulty or illness is twofold:

A seeker from the subtle-perception department of the SSRF, Ms. Anuradha Wadekar, took a subtle-reading of Elizabeth during this subtle diagnosis session. This is the drawing based on subtle-knowledge drawn by her:

This is the computer-assisted drawing based on subtle-knowledge of what Anuradha actually saw.

From the drawing based on subtle-knowledge and the subtle-reading taken by the subtle-department seekers, the root cause of Elizabeth’s problem was unveiled.

A subtle black serpent (kālā nāg), a type of ghost (demon, devil, negative energy, etc.) had possessed Elizabeth. It had created a base at the heart centre (Anāhat-chakra) and the throat centre (Vishuddha-chakra). It had engulfed her in a tight grip and had covered her with the black energy which was being transmitted to her through its mouth. This caused the various symptoms of distress like the continually open mouth, pain in the neck, physical exhaustion, etc.

3. Spiritual treatment and the road to recovery

“When spiritual remedies were applied, I would react to them instantaneously squirming and wiggling. As I understood later it was the ghost (demon, devil, negative energy, etc.) in me that was experiencing discomfort from it and was squirming. The manifestations subsided for a month or so. I was guided about which measures to take if the manifestations reappeared.”

Elizabeth’s distress caused by the subtle black serpent was severe and chronic and therefore needed intensive spiritual remedies to be applied over a long period of time. Unfortunately due to constraints of time and job pressures, she had to abandon them midway and go back to her job.

“In June 2002, the subtle-serpent started tormenting me by manifesting frequently. Since I was working, the manifestations during the 9.00 a.m. to 5.00 p.m. period would be highly inconvenient and awkward for me. In the evenings I would be in the relatively spiritually purer environment i.e. in the company of other co-seekers and hence would manifest all the more. Thus almost my entire day would be wasted with the serpent manifesting throughout. I had almost lost my identity, as I would be acting totally alien to my normal nature.

“Soon after, I unexpectedly had to fly to another country on a business trip. At that time the serpent created problems for me by affecting my personal life in various ways, e.g. if I wanted to take a stroll during a break, I would not be allowed to choose where to go, the serpent would decide it for me. Throughout the conference I would be manifest and sitting with my chin held up (as shown in the earlier photograph). I would, under the influence of the ghost (demon, devil, negative energy, etc.), laboriously fold the bed sheet in a certain perfect way, go about the toilet in a certain perfect way, etc. even though there was no one to witness it. I just did not have any control over my life.”

“In August 2002, the manifestations became severely negative, impinging on my friend’s and colleagues’ time and attention. At times the manifestations became aggressive, demanding and angry. On one or two occasions, the serpent even physically assaulted a friend through me. I was neither interested in nor could I sustain any meaningful relationship with others. I was totally alienated from the external world. This continued for some six months. When I was manifesting in the presence of family or people in society, the manifestations would be milder. It would usually be in the form of talk (not differing significantly from my own way of talking) or the serpent would pretend that she is bestowing blessings on others.

“Then in May 2005, I was fortunate to be able to afford to take time off again from my job and attend another spiritual treatment session in India. This time after the spiritual remedies, my mental state started to improve visibly. I felt like a winning attitude had been awakened in me. Although psychological distress was present to some extent, I felt that I was learning how to overcome it. There were prolonged periods when I was free from distress and depression.”

What exactly happened during the spiritual remedy sessions to bring about the above changes in Elizabeth?

Click here to see the drawing based on subtle-knowledge.

This is a computer generated drawing based on subtle-knowledge of what was seen subtly:

Details about the spiritual treatment:

Thus the spiritual remedies acted specifically to fight against the serpent and drive it away. They also contributed towards the increase in the Sattva component in Elizabeth for which she also strived actively by continually doing spiritual practice since 2002 to date. In this way Elizabeth was relieved of her distress by the subtle-serpent.

“As a consequence, my family has started to notice positive changes in me. But because they don’t believe in the subtle-dimension they do not attribute the changes to spiritual practice.”

“In hindsight, I see that without spiritual practice I would have continued to live a dual existence with an extremely successful educational and career dimension, but fumbling around in the dark with most interpersonal relationships and depression. Fortunately I have found a solution that simultaneously gives me a better personality and subtly protects me against negative energies in the subtle-dimension.”

Refer to article: Root causes of difficulties in our lives.