Abstract: We know that symptoms of mental illnesses are caused by biological factors as well as psychological factors. But most of us are unaware that in a huge majority of cases,

In this article, we present the spiritual research into some symptoms of mental ill health caused by a spiritual factor, namely ghosts (demons, devils, negative energies etc.) and the corresponding spiritual healing remedies.

This is by no means an exhaustive thesis on all the symptoms of mental ill health but is aimed to give an idea of how the various symptoms are caused by ghosts and how they can be cured by spiritual healing remedies by using the data unravelled through spiritual research.

All of us have experienced mental disturbance in some form or the other. It could be a mild symptom like anxiety or something more serious like depression, suicidal thoughts or schizophrenia. In our section on difficulties in life, we have explained that the root cause of problems in life (health problems included) can be physical, psychological and/or spiritual. Modern medical science has uncovered only the physical and psychological causes of mental illnesses.

The above chart gives a breakdown (on average) of the root causes of problems and difficulties in our lives. Spiritual research has indicated that up to 80% of the causes of problems in life have their root cause in the spiritual realm. It is important to note that any given mental ill health symptom could have a proportion of the root cause in the physical, psychological or spiritual dimension and that they are not mutually exclusive. 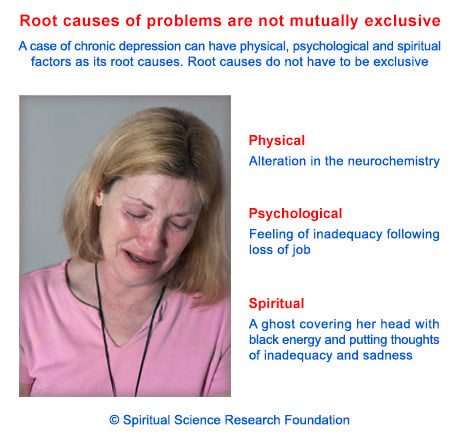 2. What are the deeper subtle causes and the spiritual remedies of mental illness?

A complete breakdown of the specific spiritual root cause of problems in our lives has been given in the article on the ‘Various types of spiritual causes of difficulties’.

Any one of the various spiritual causes can result in a person being afflicted with a mental disturbance. For example, suicidal thoughts could be caused as a result of divorce, which in turn is due to impotence caused by a block in sacral chakra (Swādhishṭhān-chakra) or by a ghost. Illness caused due to these spiritual root causes can be cured only by specific spiritual healing remedies. Irrespective of the spiritual cause, a foundation of spiritual practice according to the 6 basic universal principles of spiritual practice helps the specific spiritual remedies to work much faster and that much more effectively.

In this article, we have focused on spiritual remedies that can help alleviate symptoms where the root spiritual cause is due to ghosts (demons, devils, negative energies etc.).

Let us go back to the case of the lady who is depressed following the loss of her job. If the ghost is contributing to 70% of the depression, then by applying the remedies in this article, she should get relief corresponding to the same extent.

Presently almost everybody in this world is affected in some way or the other by ghosts (demons, devils, negative energies, etc.). For more details, please refer to our section on ghosts. Ghosts can cause any of the symptoms of mental illnesses by impairing the brain function at various levels through their black energy. They can mimic any mental symptom or ill health by using their weapon of black energy. The subtle-bodies of our departed ancestors are also included in this category.

3.1 How can we know whether our symptoms are caused by ghosts?

For example, if one experiences unexplained (without any reason) anxiety that does not go away with conventional medicine it is likely to have been caused by a ghost.

Even in cases where the root cause is physical or psychological or spiritual (other than that of ghosts), we recommend that one complement the medical treatment with the spiritual remedies mentioned below. The reason is that ghosts take advantage of any vulnerability caused by the mental ill health to attack a person and compound or aggravate the problem. Hence even an illness that may have started as a purely psychological illness, in most cases is later complicated by an attack by ghosts.

The following chart shows a typical profile of a person with personality defects such as anger, depression, negative thinking, anxiety and a general liking for alcohol. The ghost exploits and turns up the volume on the negative thinking. This in turn has a ripple effect on the other defects such as depression, liking for alcohol etc. In some cases a defect can be taken to an extreme where a person who has thoughts of suicide may actually do so when the intensity of suicidal thoughts is increased beyond a certain point by ghosts.

4. Explanation of the chart and how to use it

Please refer to spiritual healing chants for mental illnesses for an explanation of the chart.

Five parameters have been provided in the section on spiritual healing chants:

If you find pronouncing the number chant in Sanskrit very difficult, you can repeat it in your own language.

4.1 How long should one chant?

It is recommended that you perform this remedy on a daily basis for periods depending on the severity of symptoms.

After the symptoms have disappeared you have to continue the remedy for 2-4 months. Just as in the case of treatment of major depression with anti-depressant capsules, the disappearance of sadness and crying does not mean that the illness has been eradicated. The neurotransmitter imbalance causing the depression and giving rise to sadness and crying continues to persist. Hence the anti-depressant capsules prescribed for eradicating the illness need to be continued for the prescribed number of days. Similarly even after the symptoms have disappeared, the influence of the ghost remains and hence the remedy needs to be continued for complete cure.

4.2 Which remedy should one use?

We have provided you with a choice of three remedies in the table below which you can take advantage of. The following table explains the comparative effectiveness of each of the remedies. The remedies corresponding to the five Cosmic Principles are complementary to the other remedies and can be done along with any of the other remedies for faster and more complete cure. They can be beneficial even on their own if the affliction is mild or if the causative agent is lower hierarchy ghosts from the Nether region (Bhuvarlok). Otherwise they act at best as secondary treatments to the chants.

* This effectiveness is only if the chanting is done in Sanskrut

4.3 Should one continue the chanting of Name of God as per religion of birth and that of Lord Datta?

Yes, if one can continue the basic spiritual practice, the benefits are more and early. If one cannot manage both, then it is best to primarily focus on the specific remedy. This is because one generally finds it difficult to focus on spiritual practice in the presence of the physical illness which either irritates, disturbs or distracts one.

4.4 Should one continue medical treatment?

Even if one feels that the symptoms are caused by ghosts, one needs to continue their medical and psychological treatment. This is because it gives us at least symptomatic relief if not a cure. We should not waste our sparse and invaluable spiritual resources on what can be done by easily available medicine.

4.5 Does one need faith to derive the benefit from the chant?

Faith helps, but we can still derive benefit from any spiritual remedy suggested on this website without it. This is akin to the fact that one does not need faith in a medicine to derive the benefit of the medicine. So also, this is a spiritual medicine and one will derive benefit by putting it into practice whether one has faith or not.

5. Table of remedies for mental illnesses caused by ghosts