Spiritual research has shown that almost entire world is affected by ghosts at some time or the other in their life. About 30% of the world’s population is possessed by ghosts. Being affected or possessed by ghosts reduces a person’s capacity insidiously in progressively increasing degrees. Hence it is imperative that one gets to know about it at the earliest, so that remedial measures can be undertaken.

In this article we have listed some of the various symptoms that are typically seen when ghosts affect the various systems of the body. These same symptoms can be seen in routine illnesses affecting the concerned systems. So when the symptoms are unexplained or do not go away despite best conventional treatments or come up frequently, at an intellectual level we can think of the possibility of them being due to ghosts.

2. What are the physical symptoms of being affected by ghosts?

We have categorized the symptoms for easy referral.

When in the proximity of a sāttvik influence, the ghosts (demons, devils, negative energies, etc.) leave the body through any of the nine openings, i.e. two eyes, two nostrils, two ears, mouth, penis/vagina and anus. The person may experience as if gas is going out of any of these openings or one may experience cough, yawning, burping, sneezing, etc. as per the opening involved.

Vital energy (Prāṇa-shakti) is the life sustaining energy of the body and is subtle.

Amount of vital energy according to the extent of distress by ghosts (demons, devils, negative energies, etc.)

* In the present times generally the maximum distress possible is 40%

Distress will include both getting affected and possession by negative energies

** The reduction in Vital energy is because it is utilized in fighting the ghosts. When it decreases below 30%, the person dies.

3. Mental distress and its symptoms

When a person is affected or possessed by ghosts, he displays the following mental symptoms:

The main reason behind the gay orientation of some men is that they are possessed by female ghosts. It is the female ghost in them that is attracted to other men. Conversely the attraction to females experienced by some lesbians is due to the presence of male ghosts in them. The ghost’s consciousness overpowers the person’s normal behaviour to produce the homosexual attraction. Spiritual research has shown that the cause for homosexual preferences lie predominantly in the spiritual realm.

Homosexuality can be overcome by regular spiritual practice as per the 6 basic principles. SSRF suggests some simple steps.

Difference between regular sleep and the sedation caused by ghosts

9.1. Distress related to the five senses

A person can experience the following distress in the dream, meditative or waking state.

9.4. Distress due to sattvik substances

9.5. Distress due to chanting the Name of God 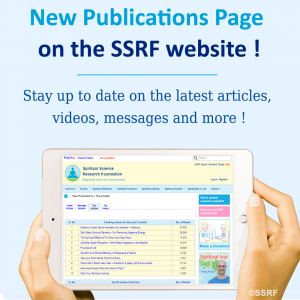