1. Introduction to manifestation of demonic possession

When we say the possessing ghost is unmanifest, we mean that the ghost has not revealed its presence. Here the consciousness of the person is to the fore but it can be manipulated and controlled by the ghost whenever it wants.

2. Reasons behind manifestation of demonic possession

2.1 Manifestations of ghosts on their own accord

As a general rule a ghost (demon, devil, negative energy, etc.) never likes to manifest unless it is of its own accord. Ghosts manifest on their own accord when:

When they manifest on their own accord, it is unlikely that the manifestation will get noticed unless the ghost wants it to be noticed.

In some Indian villages and temples people talk about a Dev or Devi (God) entering some person’s body. The person whose body the ‘Dev’ or ‘Devi’ enters often behaves unlike their usual selves and may dance or move erratically. We have received a number of questions from our readers asking about the phenomenon.

When the spiritual research team looked into the reason behind this, we found that in 70% of the cases the reason is due to a lower level Deity (positive energy/Deity) entering the person. In the other 30% of cases, it is due to a negative energy manifesting in the person with the intent of masquerading as positive energies to mislead people.

2.2 Manifestations of ghosts due to being forced out

Sometimes, ghosts possessing a person are forced into manifesting and exposing themselves. The reasons for these types of manifestations include:

2.2.1 Why does a possessed person manifest when in contact with a higher sattvik influence?

When the ghost possessing a person comes in contact with someone or something that is sattvik such as a spiritually evolved person, shrine or Holy water, it feels uncomfortable and distressed. This is because the sattvik influence being contrary to its very Raja-Tama nature, saps its energy. This can be understood as akin to the effect of heat on ice. If the spiritual strength of the sattvik influence is more than that of the ghost, it will be forced to surface, otherwise it may be able to tolerate it without manifesting.

Please refer to the article on the subtle basic components of Sattva, Raja and Tama.

A ghost who has a lot of spiritual strength very rarely manifests, unless it suits its purpose or it is necessary to achieve its objective. They can withstand a sattvik environment or stimulus without coming out into the open.

2.3 A note on the alarming nature of the manifestation of demonic possession

The exposing or surfacing of a ghost is known as a full manifestation. It can look quite scary to an onlooker as the behaviour of the possessed person alters radically (see below). At times the person displays super-human strength. It has been observed that a frail possessed woman when fully manifest may need up to six people to restrain her. However this full manifestation is temporary. 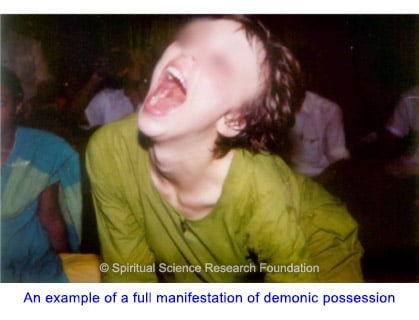 Full manifestation is not an indication of the level of possession; it simply means that the ghost or entity is surfacing due to one of the various reasons mentioned above. Ghosts (demons, devils, negative energies, etc.) in almost all cases prefer not to surface. The reason is that during manifestation they have to expend a lot of their spiritual energy and other people become aware that they possess that person. The affected person can then be taken for spiritual treatment or exorcism. So from this perspective, it is actually to our benefit when a ghost manifests.

Note: Also refer to – Why is there a protective border around the above picture?

2.4 The most dangerous aspect of demonic possession

It may seem that the scariest part is watching someone with a ghost fully manifesting as shown in the picture above. We sit at the edge of our seats when watching a movie like ‘The Exorcism of Emily Rose’. But in truth, at the point of full manifestation during a spiritual healing session, the ghost is generally at its weakest.

The real danger is when the ghost controls a person through stealth, with the person unaware of the possession. The ghost makes the person it possesses act according to its will. Even though a person is possessed, there is generally nothing dramatic or deviant in the behaviour of the person.

Addictions are just one example of insidious possession. Society thinks of addiction to cigarettes or alcohol as a psychological affliction, when actually it is a case of possession. At times, a person may show serious aberrations in behaviour due to the controlling ghost. Ghosts can make a person do things that are completely contrary to their personality, for example a conservative woman by nature starts behaving in a promiscuous manner.

View video of violent manifestation caused due to demonic possession

View video of calm manifestation caused due to demonic possession

View video of contorted movements caused due to demonic possession

Due to ignorance about the spiritual root causes of these manifestations, there is a need for spiritual measures for their cure. Due to the lack of a scientifically tested, evolved and established system of spiritual diagnosis and treatment, most cases of such manifestations approach the Mental Health professionals for help. The Mental Health professionals traditionally tend to look at these manifestations of demonic possessions as purely psychological phenomena. They label it as Hysteria and other dissociative states, psychosis, etc. This is mainly because they do not look at the spiritual dimension when considering the root causes or management of these phenomena. The team of psychiatrists on our panel of doctors has been studying thousands of these manifestations for the last 7 years. They say that these are not psychological phenomena because:

However spiritual remedies may take some time to cure the manifestations depending on the relative strength of the possessing ghost and the spiritual healing remedies applied. Here spiritual healing remedies include spiritual practice by the person who the ghost is manifesting in. In such cases the manifesting person may need urgent medical intervention like medication to at least stop the physical manifestations, especially if violent or harmful to self or others. They may also need to have physical restraints applied so as to not hurt themselves or the people around them.

Now, one may think, how come so called ‘manifestations of ghosts’ are cured by drugs?

As the spiritual problem has affected the person at a physical or psychological level as is apparent from the manifestion, treatment measures have to be directed at that the relevant level But limiting the ‘treatment’ only to physical and psychological dimension does not ‘cure’ the root cause, it only suppresses symptoms to some extent for the time being. This is amply evident from the low cure rates of psychiatric illnesses.

The last word is yet to be said about all so called ‘psychological’ disorders. The psychological sciences are still in their evolutionary stage and hence it is best to keep an open mind.