1. Ability vs inability to cope with stress

In this section to better illustrate how we deal with stress, we have displayed two pictures. In the picture below we show a man carrying 4 big loads. 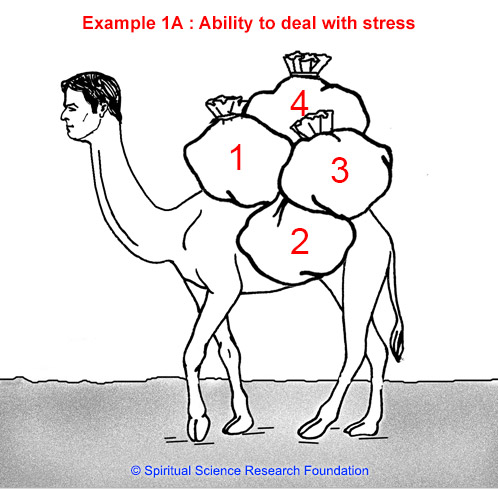 Each of the loads the man is carrying pertains to the following problems in life:

The subconscious mind can accommodate anxiety only up to a certain level. This depends on the quantity, intensity and duration of the problems being faced. As shown in the Figure 1A this person is able to maintain his demeanour with the amount of problems/issues in life that he is currently facing. 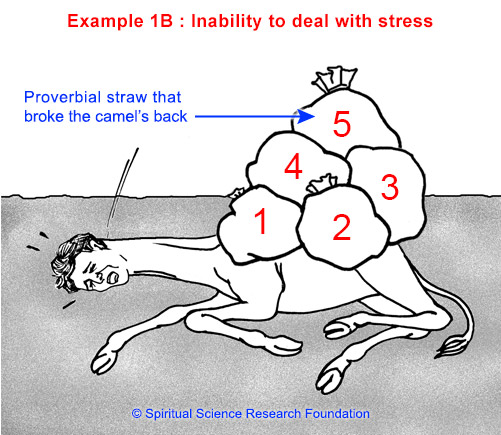 As shown in the second figure 1B, when anxiety builds up beyond that due to additional problems such as not getting a promotion, clinical manifestations of stress become obvious. Here ‘not getting a promotion’ becomes the proverbial ‘straw that broke the camel’s back’ thus pushing a person into a negative state of mind such as depression. The event which proves to be the proverbial last straw can differ from person to person based on their personality. It may be something bigger such as not getting a promotion or something smaller such as misplacing one’s mobile. Both events can lead a person to a tipping point thus pushing him into a state of depression. An outsider may think, that the person’s reaction is disproportionate to the event. However what they don’t see is the series of events and the layering of problems that took place before the ‘last straw’, which ultimately pushed the person over the brink into depression.

An individual’s inability to cope with stress and strain causes unhappiness.

2. What affects our capacity to deal with stress in life?

A person’s capacity to face anxiety depends on how much energy is available to face the stress. The mental energy available is less when there are undesirable characteristics in personality (personality defects) and unfinished business.

3. Personality as cause of stress

How to be happy