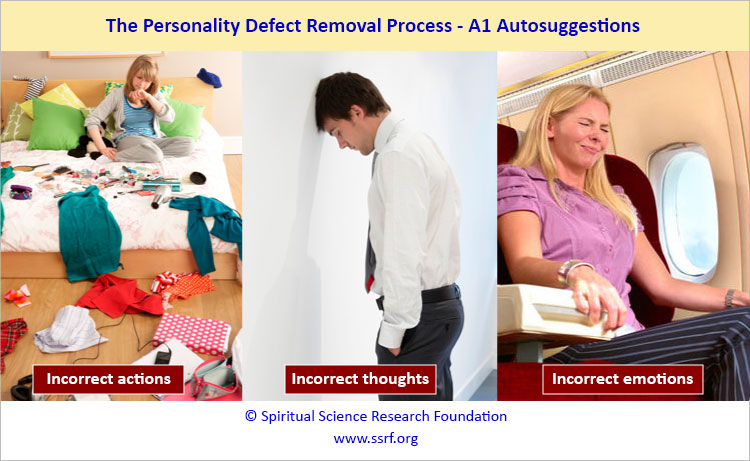 1. Introduction to A1 Autosuggestion

Our actions, words and thoughts have the power to affect not only us but the people that we associate with. On one hand they can bring about positive change by inspiring and motivating both ourselves and others. On the other hand, when our actions, words and thoughts are inappropriate they can discourage, dismiss and harm others. Even though we may try our best and despite our best intentions and efforts, it is inevitable that at some point in our lives, we will be wrong and come up short.

These mistakes/shortcomings can be trivial, for example we may be late for work and realise with frustration that we forgot our car keys in the apartment after taking the elevator ten floors down. Sometimes, we make grave mistakes as well, such as making an error in judgement, which costs us a key client. Ultimately, every mistake causes stress and unpleasantness at some level. They can mar relationships, cost money, and waste time and energy.

We have our own ways of processing this unpleasantness. Many times, people want to get over mistakes quickly, so they may not spend much time contemplating about them. On the other hand, some of us try to reflect and learn from mistakes so we can reinvent ourselves and thrive in an effort to hone skills, rectify bad habits and improve ourselves overall. We may succeed to some extent but usually we find ourselves unable to change fully. This is because our incorrect actions, thoughts and emotions stem from impressions in our sub-conscious minds and to overcome them spiritual energy is needed.

Psychiatrists and self-improvement coaches have studied how people can change themselves in detail and a lot of research has been published on it. However, only a few of the research studies or information available on how people can change themselves address the impressions in our subconscious minds and that too at a superficial level. The reason we keep experiencing the same troubling situations over and over is that the negative impressions (in our subconscious minds) are not addressed/corrected so they keep adversely influencing our behaviour. For example, we get angry when we know intellectually that it is not helpful, we feel jealous of others even though we do not want to feel that way, or we keep coming late for work even though we know it displeases our boss.

Autosuggestions give the spiritual energy needed to nullify the negative impressions. As explained in the previous article in this series, ‘What is an Autosuggestion?’, Autosuggestions address our impressions in our subconscious mind, enabling us to make lasting positive changes to our personalities.

There are different types of Autosuggestions to address different situations. In this article, the A1 technique to address incorrect actions, thoughts and emotions is covered. In addition, the A1 Autosuggestion technique can be used to overcome addictions such as smoking, drinking, gambling, etc. and bad habits such as stammering, bedwetting, nail biting, etc. This is covered in more detail in Section 7.

2. Definition of the A1 Autosuggestion technique

The A1 Autosuggestion technique creates an awareness of all wrong thoughts, emotions and actions and enables us to control them by providing one’s mind with a corrective measure.

3. Application of the structure and format of the A1 Autosuggestion

An example illustrating how one can apply the A1 Autosuggestion technique is given below : 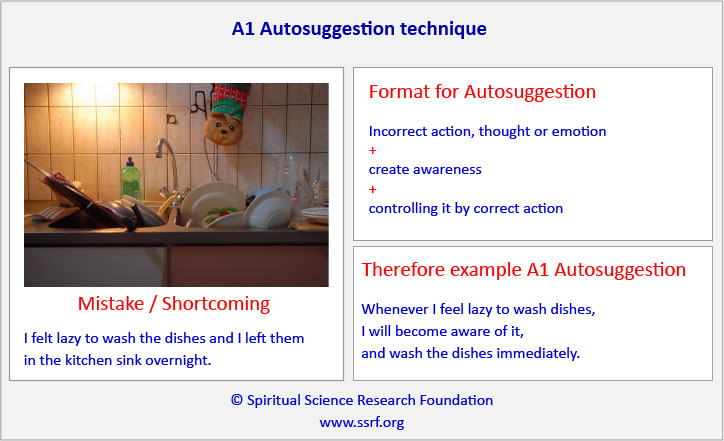 The mistake / shortcoming is that one felt lazy to wash the dishes and had left them in the sink overnight.

4. How to decide when to select the A1 Autosuggestion technique

Let us see in which situations or types of mistakes A1 technique can be applied.

The A1 technique can be applied to all actions, thoughts and emotions that result in mistakes being committed by yourself.

Below, the meaning of incorrect actions, thoughts and emotions are given.

So, we select the A1 technique when we are responsible for a mistake and it is due to an incorrect action, thought or emotion. The following flowchart shows visually how we would know when to select the A1 Autosuggestion technique to address a mistake. 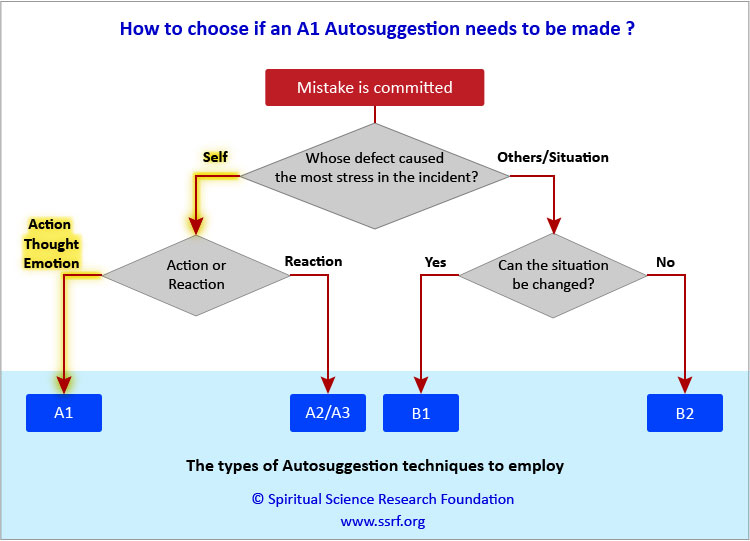 Now, using the above flowchart, the following example shows us how to use it for A1 Auto-suggestions. 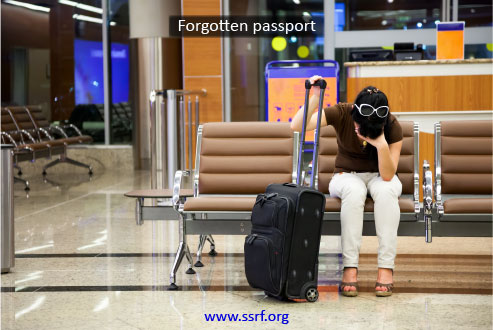 Mistake/Shortcoming : Due to being disorganised, forgot my passport at home and only realised it when I reached the airport. As a result, I could not board my international flight.

The first question we need to ask to determine the Autosuggestion type is – whose personality defect is primarily the cause of stress in the situation or who is responsible for the mistake. Here it is self as I forgot my passport.

So, based on the analysis, since this mistake is an incorrect action caused by self, an A1 Autosuggestion can be used.

The format for framing an A1 Autosuggestion is :

5. Examples of A1 type Autosuggestions

A1 Self Hypnosis Autosuggestions from SSRF Inc.

6. Stages of awareness of incorrect actions

Autosuggestions can be designed to take into account one’s level of awareness of the mistake:

No matter what stage we are at regarding an incorrect action, by taking A1 Autosuggestions, we can move to progressively higher stages and eventually avoid making the mistake. Let us return to an example from the previous section to see how this could happen in practice : 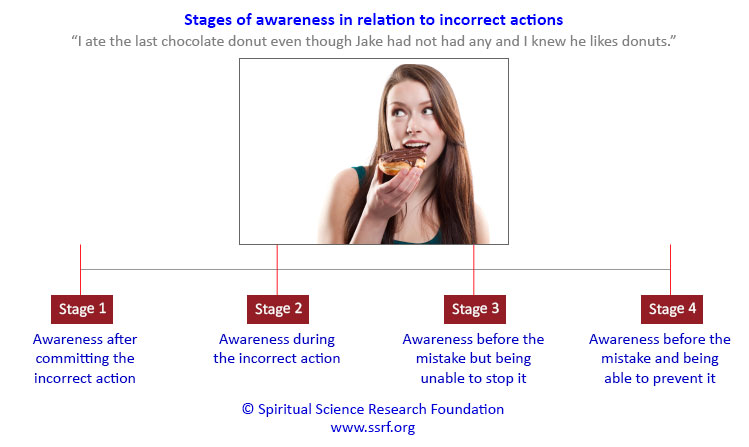 Mistake/Shortcoming : I ate the last chocolate donut even though Jake had not had any and I knew he likes donuts.

7. Applying the A1 Autosuggestion technique to overcome addictions and bad habits

Incorrect actions include addictions and bad habits. This is why the A1 Autosuggestion technique can be used to overcome them, and explanation about how to do so is given ahead.

Most of us would know someone with an addiction. We feel helpless especially when we see a family member unable to extract himself from the addiction. Often, people who have an addiction are in denial about it, and even when they admit they have a problem, they are unable to overcome it and feel a loss of control. Unfortunately, current treatment methods have a notoriously poor success rate, with relapse rates for some drugs of abuse being over 90% (Smyth, 2010). By applying appropriate spiritual healing remedies and A1 Autosuggestions, the success rate of addiction treatment can improve significantly and a person with an addiction can overcome it. 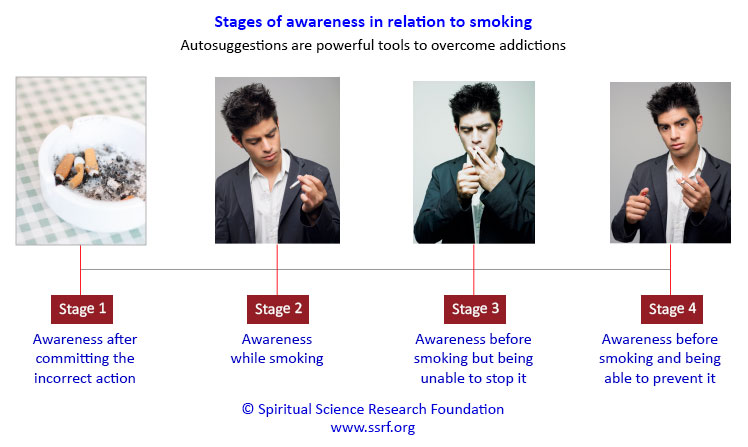 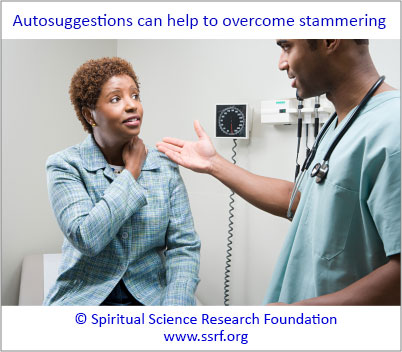 Imagine yourself going for an interview. It is going better than you expected and you are answering all of the interviewer’s questions well. But then, your heart sinks as you realise that the interviewer is asking you a question which you have no way of answering properly. You try to answer, and as you do, you end up stammering just as you knew you would. With a feeling of despair, you realise that you may not get the job due to this one slipup.

Bad habits can be the source of a good deal of embarrassment and consume a person’s mental energy. As the above example illustrates, they can also have more drastic consequences such as hampering career growth. Many who suffer from such habits truly want to overcome them, however, they can be difficult to overcome with conscious effort alone. This is because people often act on bad habits without conscious awareness. For example, someone may bite their nails in response to stress and only realise it when they look at their nails later. Even if the person is aware that they are biting their nails, the subconscious urge to do so can be so powerful that it overpowers any conscious intention to discontinue the bad habit. The A1 Autosuggestion technique can be used to effectively overcome such bad habits. Bad habits are also incorrect actions, so Autosuggestions can be framed as per our level of awareness similar to how they were framed for addictions in section 7.1. Examples of Autosuggestions that can be taken for the bad habit of stammering are given below.

In the case of stammering, there is no fourth stage of awareness because a person does not consciously get a thought that they will stammer. The text “speaking fast” can be changed depending on what causes stammering in a person. For example, if there is a particular sound that a person is unable to say without stammering such as the letter “b”, then that can be mentioned in the Autosuggestion.

Whether a person suffers from stammering or another bad habit, it can be overcome by framing Autosuggestions as above. We can assess how many stages of awareness are there for a bad habit and take Autosuggestions accordingly.

When we start correcting actions, thoughts and emotions, our relationships, interactions and demeanour changes for the better. As the US Navy Admiral, William H. McRaven, said, ‘If you want to change the world start off by making your bed.’ The A1 Autosuggestion technique helps to give the necessary positive stimulus to the mind to make the change. Thus, the mind starts getting purified and we experience positivity. We encourage you to implement it, so you can experience the benefits of a more positive personality first-hand.