Imagine this. A nuclear device has just been detonated in your city. Those of us who are within the initial blast radius would not know what happened as we would be obliterated before we had time to register that a nuclear device had been detonated. Scientists say that these people would actually be the lucky ones. People a few more kilometres away from the blast would suffer from burns or exposure to radioactive material that could have immediate to long-lasting detrimental effects on them and their family. At this point, a few things would be going through their mind.

In many articles on the Internet, the ritual of Agnihotra has been promoted as a simple ritual that helps to minimise the adverse impact of nuclear radiation. The statement piqued our interest, because for modern science this is a fantastic proposition: that a simple ritual done at sunrise and sunset along with the recitation of a mantra can actually quell the harmful effects of nuclear fallout. This ritual also becomes especially relevant with some other information we have received through spiritual research about the coming times.

Most people do not know that there are measures that can be taken at a spiritual level along with efforts at a psychological and physical level to defend oneself against a nuclear attack. This article expands on the measures we can take at a spiritual level to protect ourselves from the effects of a nuclear attack and for the prevention of it occurring.

2. Protection from a nuclear attack on a person performing Agnihotra

Information for this section has been sourced from Effects of Nuclear Explosions by Mr Carey Sublette and nationalterroralert.com. In addition we have used the Nuclear Weapon Effects Calculator which is based on scaling laws printed in Carey Sublette’s well-known Nuclear Weapons FAQ to help give perspective on the benefits of Agnihotra.

Damage caused by nuclear explosions can vary greatly depending on the weapon’s yield (measured in kilotons or megatons), the type of nuclear fuel used, the design of the device, whether it is exploded in the air or on Earth’s surface, the geography surrounding the target and whether it is winter or summer, hazy or clear, night or day or windy or calm. Whatever the factors though, the explosion will release several distinct forms of energy as given in the immediate and delayed effects above.
The following picture shows the predicted effect of a 1 megaton nuclear bomb exploding and the distance of the impact of the various forms of energy. It also shows the level of destruction/level of protection that would be experienced in the case of a person at the 50% spiritual level practicing Agnihotra regularly. 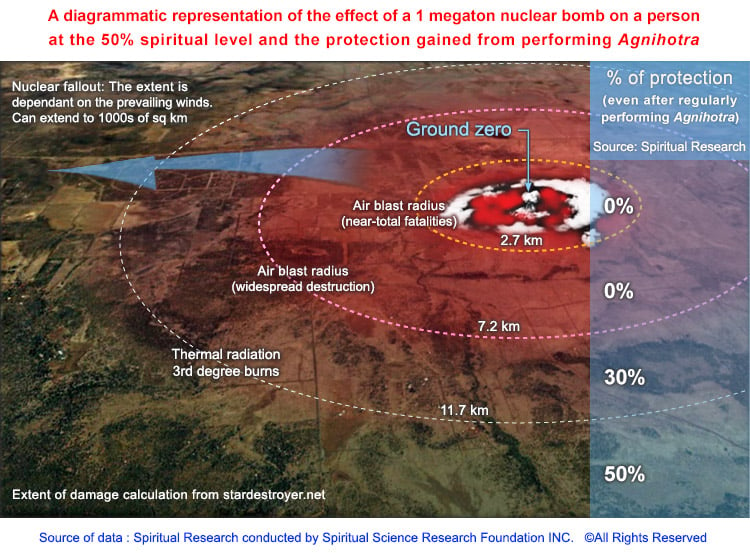 Let us now look a little more closely at each of these energy types and the level of protection that the ritual of Agnihotra can provide. (Source: Spiritual research conducted by SSRF) 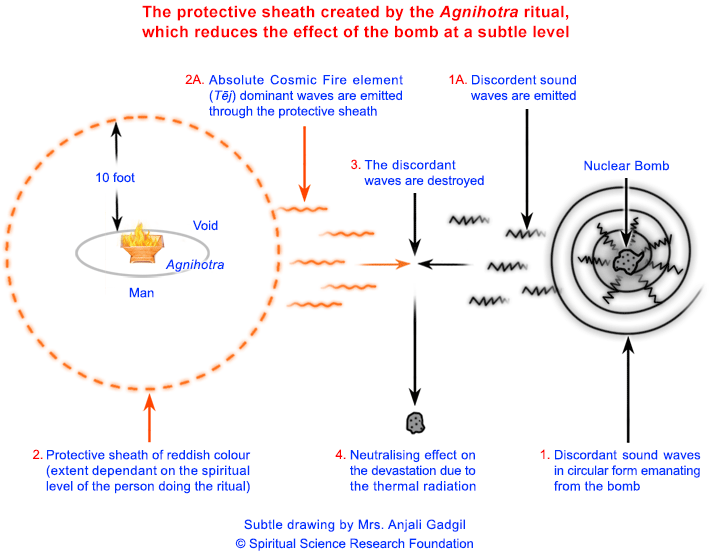 When a nuclear device is detonated, it gives rise to Raja–Tama predominant vibrations of the Cosmic Fire Principle. Discordant subtle-sounds accompany these frequencies. These subtle-sounds have a subtle harmful effect on the mind and intellect of the people in the vicinity of the nuclear attack. This can range from depression or negative thoughts to fogging up of the intellect.

3.1 What decides the effectiveness of the Agnihotra ritual during a nuclear holocaust?

It is important to keep in mind that the protection levels that are being discussed are in a nuclear holocaust environment. Therefore, the benefit that the ritual of Agnihotra can provide is severely restricted compared to in a peace-time scenario.

3.1.1 As per spiritual level and attitude of the person

When a person performs Agnihotra, there are a few factors that come into play that define the efficacy of the ritual in neutralising the effect of nuclear radiation .
The table below shows the effect on a person (depending on his spiritual level and spiritual attitude or state) while performing the ritual of Agnihotra.

3.1.2 Person performing versus the person observing the ritual:

4. Role of spiritual practice and spiritual level in protection against a nuclear attack

The major events that happen in a person’s life are primarily due to their destiny as per the law of karma. The best way to overcome adverse destiny (which is a spiritual problem) is by doing spiritual practice.

Protection against a nuclear attack