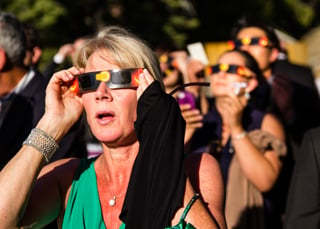 Picture courtesy of the Q speaks on Flikr.com

As this blog post is being written, eclipse chasers are making their final arrangements to travel north to places such as the Danish Faroe Islands and Svalbard, Norway to get a glimpse of this annual total solar eclipse that is happening on 20 March 2015. For those North Europeans who are less adventurous, they would still get to have a good look at the solar eclipse from where they reside. This solar eclipse has created quite a buzz in Europe, which is in a way understandable considering that next time such a celestial event will happen on the continent is in 2026.

As the old saying goes, there are more to things than meets the eye, and for all the star gazers in the case of an eclipse there is a pun intended. There is truth in the belief of some ancient and modern cultures, where solar eclipses have been viewed as bad omens. Spiritual research conducted by SSRF reveals that from a spiritual perspective, the eclipse is one of the most detrimental celestial phenomena especially for those who view it. The Sun is the light of our world, but this anomaly of the moon blocking out the Sun’s light gives rise to a high amount of negative spiritual vibrations. Negative energies from the spiritual dimension come out in full force to take advantage of this increase in negative vibrations. The fact is that the whole environment especially where the eclipse can be seen is charged with spiritual pollution and the unsuspecting eclipse watchers are enveloped in it.

Just as we would not run towards a leaky nuclear reactor due to fear of being affected by nuclear radiation, we should stay away from viewing eclipses as entertainment. Viewing an eclipse with appropriate eyewear may help to protect one’s eyes at a physical level, but the eyewear is no match for the onslaught of negative energy (that is like poisonous spiritual gas), which one imbibes. As most people do not have sixth sense ability or extra sensory perception, they cannot perceive this detrimental subtle effect and may be tempted not to heed this warning. However the negative spiritual energy blast from an eclipse can exert an adverse impact that may last for months on an average viewer.

The upside about a solar eclipse is that (unlike natural disasters) we get to know about them well in advance and hence we can take appropriate measures to protect ourselves against it. There are in fact a number of precautions that one can take at a physical and spiritual level to protect oneself and one’s family during this time. Spiritual practice such as chanting the Name of God is a powerful tool to counteract such an adverse spiritual event. We encourage you to read our article on the Spiritual Meaning and Effect of a Solar or Lunar Eclipse for a full explanation about the spiritual process that gets underway around the time of an eclipse. The old adage of ‘prevention is always better than cure’, is apt for how we should address the harmful effects of this year’s total solar eclipse.